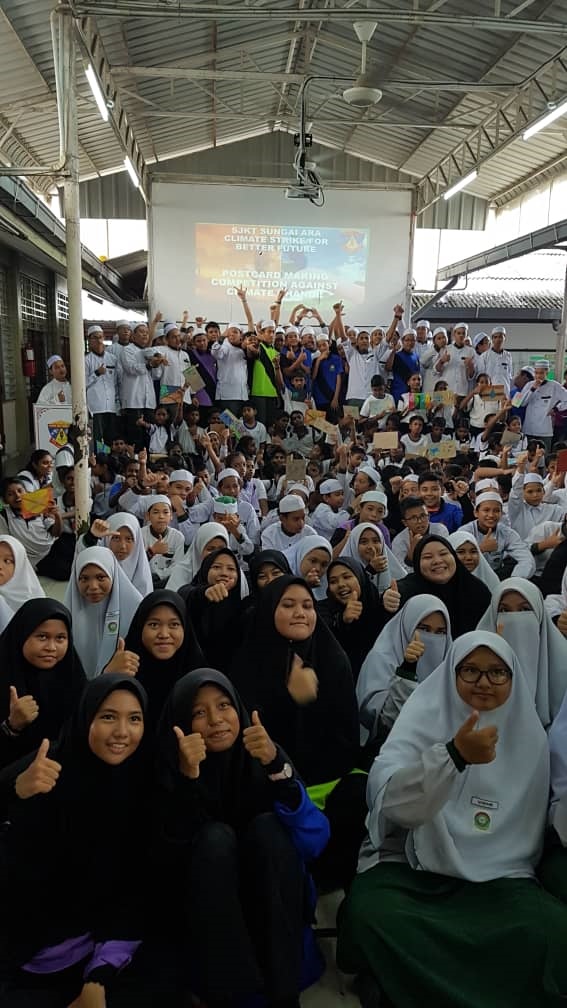 A wave of environmental consciousness is sweeping across young people in southern Penang Island.

Pupils from two schools in Malaysia created history this morning by becoming the first schoolchildren to participate in the Youth Strike for Climate global campaign, which is taking places in a series of Friday protests around the world.

The Sungai Ara Tamil primary school organised a “postcard-making competition against climate change” this morning with over 100 pupils participating. Five winners of the postcard competition were awarded prizes and lots of small consolation prizes too.

Half way through the event, heads turned when another hundred pupils from the nearby Al-Itqan primary and secondary schools, accompanied by teachers, dropped by. Full article on Aliran website

This is the hit song from the movie:
https://youtube.com/watch?v=3E2kvxvlJvQ

Both actor and actress are now RIP.

Not sure if they understand the concept of carbon footprints.

Start walking or biking to school. No more kereta Ku or bas sekolah.

Poor kids!
How to explain if they find out the truth? Damage done already
Any idea how much the European Commission budget is for this nonsense hype???
Its all in the game…definitely not for the future of the children
Such shame!!!

Important for these religious school students to place equal emphasis on science education and digital competency to safeguard their future earning capacity.

They should opt for TVET to master a living skill.

The medival warm period was removed and the 1930’s extremely hot decade had also been removed from micha… https://t.co/xSvBrhGX2R

Mariam Mokhtar: Islam is not the problem. Institutional Islam is. Political Islam is.

Learn to strike at young age later grow up will mogok!!!

Why emulate the negative element grom the West?

Do not be surprised if these kids are manipulated to emulate “Yellow Vest” protest….

mmm…how does youth strike works? ponteng school ? more strikes to come when these kids start their working life now that they got good “training”…hehe