The above photo has now been featured on CNN live updates.

Look what I spotted at 9.15am in Penang today. Some youths in Penang were raring to get off the blocks to join in today’s global Youth Strike for Climate protest.

They were walking along the pavement this morning bearing placards calling for a greener world, when I ran into them.

These were new faces I hadn’t come across before. When I asked where they were from, they said they were environmentally concerned youths, some from different parts of the world, associated with a farm in Penang.

After I spoke to them, they moved a bit farther and engaged in a flash protest at a junction nearby. Their walk along the busy streets from 8am to 10am was part of a full-day programme they had lined up to mark the Youth Strike for Climate protest day.

Later today at 5.10pm more youths are expected to gather at USM to demand that we take more serious action to deal with climate change, instead of largely ignoring it and carrying on with business as usual.

While the politicians pursue an unsustainable economic model or bicker about race and religion for electoral gain, these youths are seriously worried about climate change, which they feel will imperil the world and threaten their own future.

In many ways, by not mainstreaming the fight against climate change and promoting climate resilience, we have failed the younger generation. Now the youths are standing up and making their voices heard. They will no longer be quiet.

READ MORE:  Ladies and gentleman, we have arrived at Penang International Airport 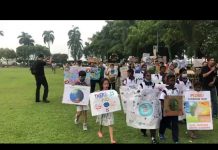 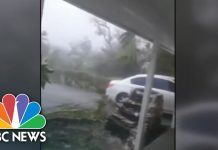 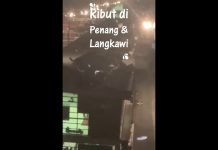 They should volunteer to go the schools to teach students about environmental protection. No point protest if you cannot educate the masses.

Last weekend I noticed many youngsters buying bubble tea and sipping with plastic straws. The containers are plastics -one time use like straws- contribute to waste! So please educate the youth!

Researchers pulled nearly 40 kg of plastic waste out of the stomach of a young cuvier beaked whale that died in the Davao Gulf of the Philippines on Saturday, March 16. The whale starved to death because of the plastic in its belly.

The risk of micro plastics found in the fish we eat.

Susu teh loves them. More the merrier as he miss the fish. Orso those fishes hanging around the kopi and teh susu River mouth

Microplastics in Seafood and the Implications for Human Health

In a worse case scenario of climate change like extreme high temperatures or rise of 20ft sea level, the victims can be anyone from anywhere, of any religion or of any race. It is impartial on who will receive the backlash of climate extremities. These youth have more common sense of their future survival in these days of climate extremities than some politicians who care more for money, popularity, power & political portfolio of this & that development. Race & religion will not guarantee you a safe indemnity from Nature’s wraths. Better to focus resources for healing Mother Earth, our… Read more »

Yet you want to drive me around to makan angin with your 4wd or to look for cheapest one ton mee. Ngos should ask for return of Sa Len chia ie tricycle. Ngos and youth today destroy the livelihood of these bechah as they drive cars. Can support big on coastal fishermen but not bechah riders. Bechah is supposed to be one of the icons of peng land just as ting ting trams of Hong land? I spin again??

Why silence on having airport in kulim and relocate pg airport there. All the land can put into better use. Or yourself agenda only?

Youth today try to be cool by engaging in protest here and there. But how many of them really protect the environment according to this simple checklist: 1) Plant trees or save trees: Think green. Saving trees will also help save wildlife. 2) Save paper: avoid taking unnecessary printouts. Use recycled paper. 3) Limit the use of air-conditioners- build up your tolerance levels and get used to living in natural whether and climatic conditions. 4) Conserve electricity. Switch off the lights, fans, air-conditioners/heaters when leaving a room if you are the last one to leave. 5) Save water where possible.… Read more »

Very surprise tung land, susu teh and pg forum do not dare to dwell on that. They are not psm or two dollar man. Tung land will drive to look for one ton mee.

The youth today should eat less beef for the sake of environment. Be a vegan at least once a week. They should use public bus instead of driving own car.

Commercial rearing of cows has effect on climate change as methane gas is release each time a cow farts.

Lots of things youth today can do but they think it is hip to protest. Self examination and reflection needed!

Susu teh and tung land take the lead or initiate?

The Earth Hour event this year will be held in George Town, Penang and Alor Setar, Kedah as it revolves around the importance of the Ulu Muda Forest Complex for people of the two states.

The Earth Hour will take place at Gurney Paragon Mall, Penang and Aman Central Mall, Alor Setar on March 30 from 6 pm to 10 pm.

How many will take rapid, bicycle, walk or SA lian chia or bechah? Big makan before and after the event?

Good thing about this protest is that it have nothing to do with race, religion nor the royals.The best way to go “Green” probably are to stop upgrading your mobilephone,stop buying cars, stop buying new LED TV,stop buying new houses, stop renovating houses, stop using air conditioners,stop eating animals and add in population and birth rate control. etc. The list is endless in order to stop climate change. The next question is, is that what they want?

Hello Anil is this photo from a strike that took place today Friday? And if so where is it please, and c… https://t.co/CiRW4b027a

See what happen in France. Now the yellow vest protest has turned violent. Protest is no good. Youth should educate instead!