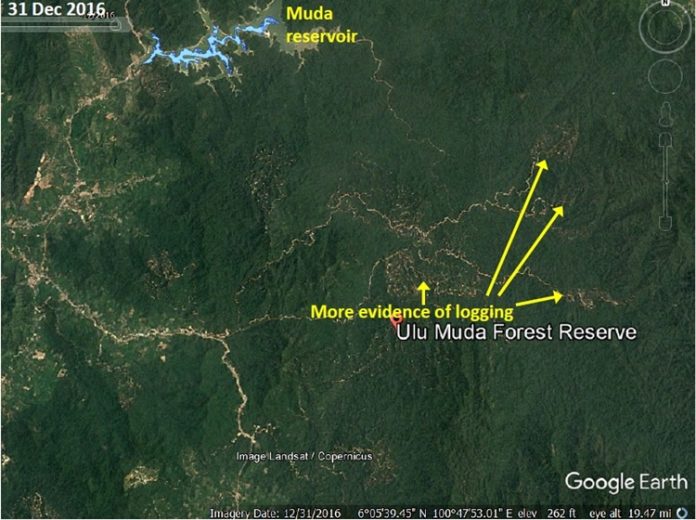 Penang Forum has just released this media statement on the need to protect the Ulu Muda water catchment area:

Penang Forum supports the call of Penang Chief Minister Chow Kon Yeow (Sunday Star, Nation page 8, 24 June 2018) for a halt to logging activities in the Ulu Muda Forest Reserve area, which is a crucial water catchment for the Muda, Pedu and Ahning dams that supply water to Kedah, Penang and Perlis.

There is a real cause of concern for Penang, being a water deficit state. Water from Muda provides 80% of treated water supply to Penang, besides another 96.5% to Kedah and 70% to Perlis.

In the 10th Malaysia Plan (2011-15), the Economic Planning Unit (2010) had projected that water demand for both Kedah and Penang would triple over the period 1995-2020. This has not taken into account the impacts of global climate change resulting in reduced and greater uncertainty in rainfall.

Furthermore, with the expected tripling of economic growth in the Northern Corridor Economic Region by 2025 (according to the NCER Blueprint), there would be an even more rapidly increasing demand for water supply for Kedah, Penang and Perlis.

The Ulu Muda catchment is also the main source of irrigation water to the 96,500ha of paddy land within the Muda Agriculture Development Authority (Mada) granary area of Kedah and Perlis and to another 12,800ha of the Integrated Agriculture Development Area (IADA) in Seberang Perai. These granary areas constitute the largest rice bowl of Malaysia, bringing livelihood to 60,000 farming families and accounting for a third of the total paddy production in Peninsular Malaysia in 2014.

Over the past years, shortage of irrigation water from Ulu Muda during the dry months has already caused delay and reduction in the off-season rice crop area in Mada and IADA, Seberang Perai.

Hence water security provided by the Ulu Muda catchment extends beyond the north-western peninsula states as it also contributes to food security for Malaysians at large.

It is therefore crucial that the Ulu Muda forests, the largest remaining tracts of forest in Kedah, are maintained in their pristine condition, not only for the sake of water supply but also for other ecosystem services such as acting as a carbon sink and home to rare and endangered wildlife species.

As at 2008, within the Ulu Muda forest area, five permanent forest reserves (PFRs) with a total area of 143,300ha had been gazetted for both production and protection purposes by the Kedah state Government using the state-adopted National Forestry Act 1984.

According to 2008 Kedah Forestry Department records, of the area of these five PFRs, 78,052ha (54%) were gazetted for timber production, while 22,611ha (16%) were gazetted for water catchment. Another three PFRs totaling 19,700ha were subsequently added, bringing the total PFRs area to 163,000ha.

But the gazetted catchment area seemed to have been reduced to 12,500ha, according to a response by the Ministry of Natural Resources and Environment to a parliamentary question posed in August 2017.

Given the critical roles that the Ulu Muda forests play, particularly in providing crucial water supply for agriculture and economic development, it is imperative that all the PFRs should be gazetted with protection status. But, as pointed out by Chief Minister Chow, Kedah would need to be compensated for loss of timber revenue due to the cessation of logging in Ulu Muda.

The planned top-level meeting, as announced recently in the media, is an opportunity to develop a framework for stakeholders who are benefiting from the Ulu Muda forest to contribute financial resources for the management and conservation of this area through approaches based on the user-pay principle and payment for ecosystem services.

The Kedah Water Resources Enactment, gazetted in 2008, provides for the creation of a water resource fund and a water development fund, which could be used to receive payments based on the concepts mentioned above.

Penang government is looking into banning plastic straws and single-use plastics, such as plastic lids and cups.

No plastic straws at McDonalds, KFC and Tealive please.

Why can’t Malaysia sell processed water, instead of raw one, to Singapore and charge a premium pricing?

Let us hope that the Malaysia Baru is able to negotiate better terms with Singapore.

The same vein question: Why couldn’t the Malaysian inventor of the thumb drive manufac this great product here instead of in Taiwan?

“Father of the pen drive” Datuk Pua Khein Seng was once probed by Taiwan authorities over an allegation that it “cooked the books” of the financial accounts of his company Phison Electronics Corp.

shui = money is colloquial for the man in the street.
You don’t converse that in high class society or language class of literal everything!

The fact that this issue has to be raised at all shows collective, human insanity.

But we also hv to respect Kedah needs to explore its natural resources to sustain its own survival!

Therefore, Penang too needs to explore other means of obtaining raw water! Penang hv to start thinking out of d box for solutions for d future.

Ah pejk recommends to imposed tolls for non pg cars. Imposed the same for non pg lang coming and going out of pg. Move the airport far away from pg and less people will come. Reduce people and water will consume less

Penang can learn from Singapore to have desalination plant.