How is it possible for a developer to ignore two stop-work orders from the MBPP and a court order obtained by the Southwest District and Land Office?

Three dozen chalets are being constructed along the slopes of Bukit Laksamana – as well as a road! All this in a water catchment area. About 10 acres is affected.

As if the horrific scarring of the eastern side of Penang Hill isn’t bad enough (see satellite image above), now hills are being scarred even in Teluk Bahang. 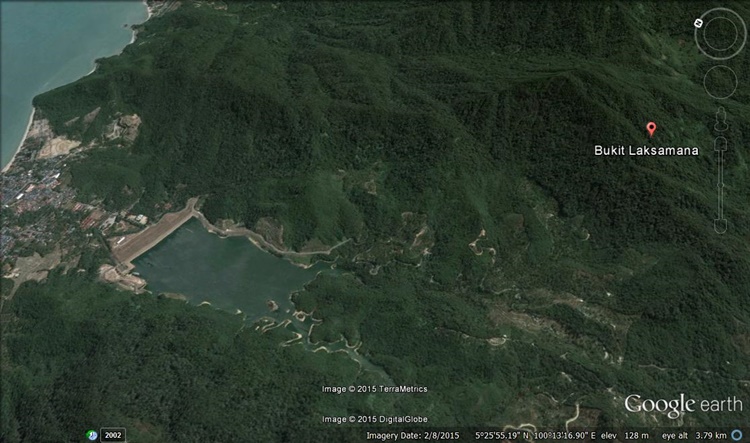 How can a developer get away with this? No one seems to know who the developer is – though I am sure the MBPP can find out if it doesn’t already know. What has happened to its enforcement personnel? Are they only good for demolishing illegal roadside stalls?

How is this even possible? It reminds us of Botak Hill all over again.

Another blatant example of Developer Power.

To be honest, I do not quite get the meaning of some terms used in most of the dialogues which take place here. For examples, Niao Kong, CAT, etc. I know the literal meaning but knowing the literal meaning of the terms does not help me to comprehend the passage well. Unless, this is a ‘special’ platform for a ‘special’ group of readers with a ‘special’ purpose and aspire to achieve a ‘special’ goal, I guess since it is a public online forum kind of popular blog, it is good for the admin to define some of the terms that… Read more »

Good point. Will those using such terms please explain what they mean.

Niao Kong literally means old cunning cat humans should avoid. CAT an acronym by itself fits well with the above animal. Why? This CAT or Niao Kong is not what it says it is: 1) It’s Greener Cleaner Penang is a laughing stock of environmentalists. Just look around the hills of Penang & you will see a lot of ‘botak hills’ going on unperturbed. Look at Coast-Mud-Politan Gurney Drive & what the hell has the costly green cleaning balls of a PR stunt by Niao Kong done to clean up the muddy flat (if at all)? Instead the Gurney mudflat… Read more »

We thought niaokong is the one many shops display at the entrance waving for good fortune. Good that tingling clarify his/her terminology.

If so, looks like many now revert to BohHoot for old time sake?

It is natural for those who get no kang tao in the present Penang administration to kau peh kau boo.

My hunch: Niao Kong is awaiting with bated breath for another round of quiet donation to Pg Heritage Fund, this time from this recalcitrant developer of Bukit Laksamana. Soon we may see a Great Wall of China being built as perimeter fencing for the richie chalets cutting off popular hikers’ trails which lead from Teluk Bahang Recreational Forest to Penang Hill. These jungle trails are one of the toughest & wild trails hikers use in preparation for expeditions to Gunung Tahan, Mt Kinabalu & Mt Everest. The paths cross over 5 or 7 hills & end at Tiger Hill where… Read more »

Penangites can forget apes instincts when forest greens give way to lifestyle condos? May be the new concrete dwellers can smell harum wangi courtesy of high spirits natives and make buddies with the apes there? OhOh tong tong meow meow fishy smell next?

You don’t need to be a monkey like chimpanzee’s wide nostrils to smell anything fishy in Penang’s land & sea & hill development.
And don’t poke fun at nature’s spirit. Jangan main-main mulut, Ben10. I recommend you go to Air Itam Dam forest if you think it’s all a farce & test these spirits. Not guarantee you will come out in one piece.

Sia Boey running short of lorong cats due to overdevelopment of George Town.
Can someone get me big fat Niao Kong. Willing to pay a high price.
Niao-Niao Soup, Niao-Niao Soup, lai-lai-lai.

SiaBoey Cat Soup Hawker is the manifestation of that chendol-lang ?

Ringland has nothing but negative vibes. Sad for him.

The govt knows it. MBPP play dumb and so is the CAT. Hahaha Penang will be botak patches here and there and their sycophants think its another god sent. Well earlier he was like that angel now turn syaitan. Should not we show him the way back to to his hometown.

Gerakan Oh Tong Keong (of Taman Manggis & MPSP “Ape” fame) brought up this matter. Rather than waiting for local government to solve, why not Oh gets his Gerakan comrades like the Tengs to catch the culprits and this can score points with future voters ????

Gerakan must learn to capitalise on such opportunity to redeem themselves, but may be they are afraid to be implicated by the developers for past wrongdoings?