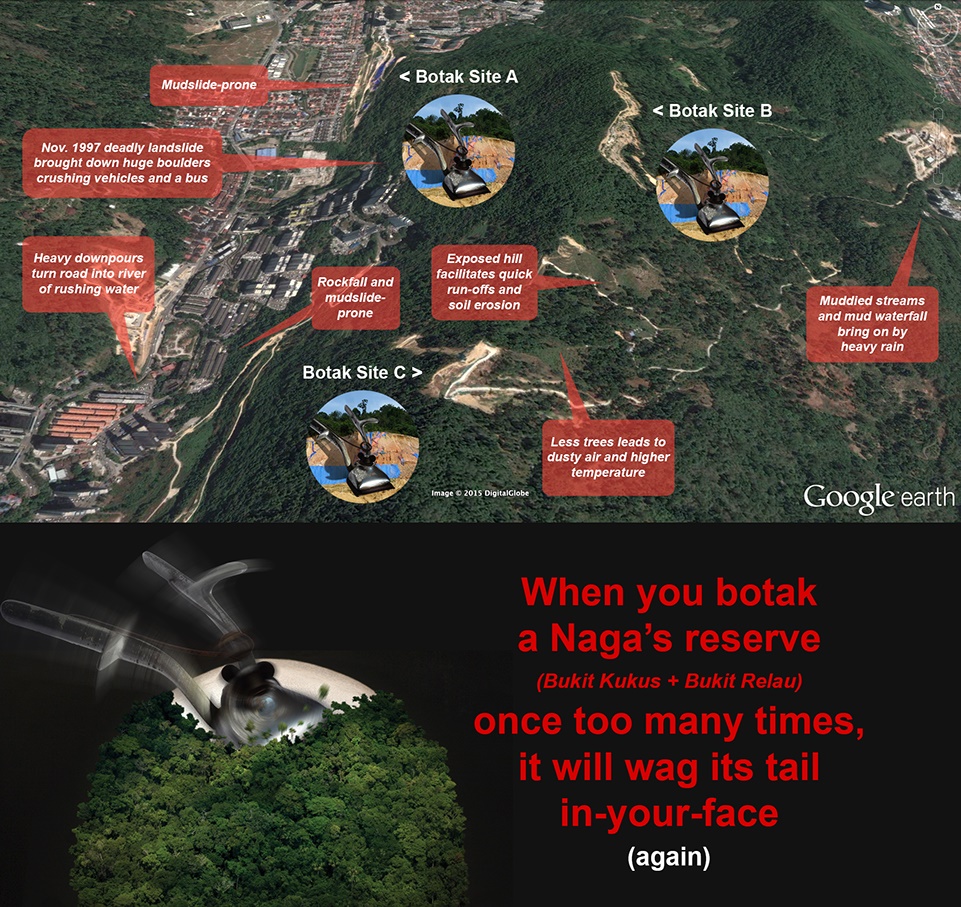 This story is by blog visitor tunglang:

November, 1997 – There was excitement circulating in the air about a wonder of Nature in Bukit Kukus, Paya Terubong: a newborn natural waterfall @ Sun Moon City (low and medium-cost apartments). I couldn’t believe my ears; so I went to investigate one fine afternoon.

Seeing was believing. On a slippery cliff of dark granites, a multitude of small waterfall streams danced down from the heavens. Envy filled my mind:“How lucky you folks are at Sun Moon City. Nature has surely blessed this place with a natural waterfall”.

Then, a ‘Believe it or not!’ incident happened the very next day: a massive landslide of heavy soil, mud and rockfall of huge boulders, some bigger than a bus. Vehicles parked along the roadsides were destroyed. A factory bus was crushed into ‘pulped salt fish’ by a monstrous boulder.

This Nature’s beauty-turned-deadly beast of terror shocked many especially those staying in Sunmoon City. Was it the Naga wagging its tail in our face?

We don’t need a geophysicist brain to rationalise that Botak Hill is not an option to play with. Nature’s laws are common sense guides since time immemorial – from the time of Adam’s and Eve’s foot prints in the Garden of Eden. 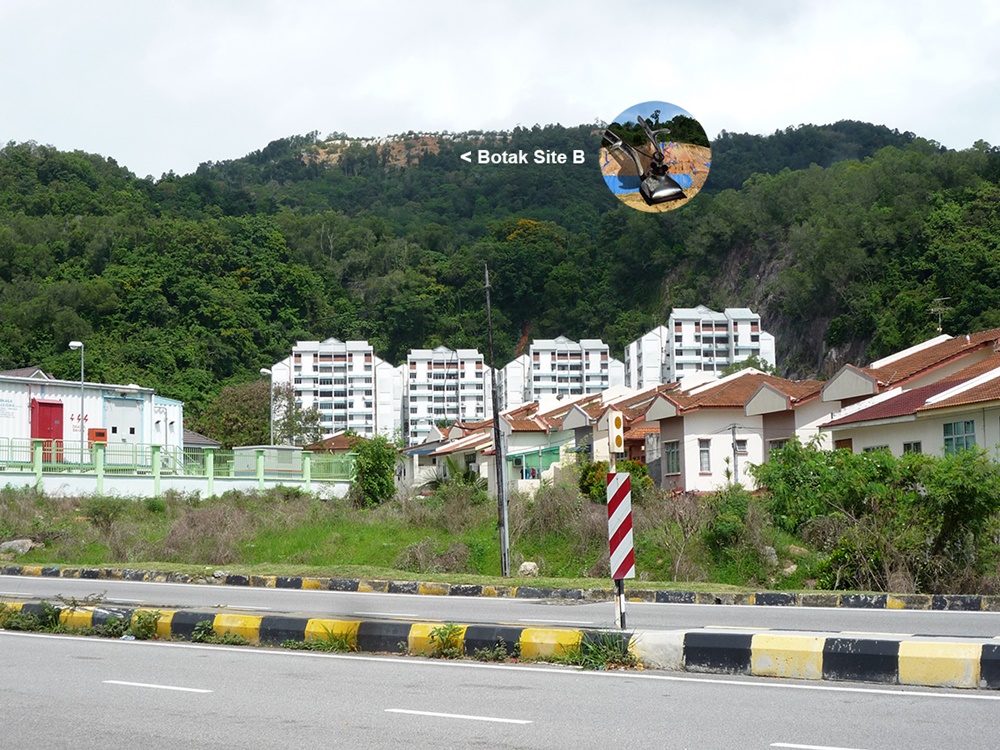 No need for a natural science PhD to complicate matters relating to safety, co-existence, sustainability and life and death in the natural world. Even the Orang Asli for generations know by heart the fundamental rules of treating the forests and hills with utmost respect. They know not to tempt fate with the Nagas, whom they believe to be ancient spiritual keepers of our rainforest hills and mountain ranges.

Penang’s hills are no exception as they once belonged to the lofty mountain ranges of prehistoric times. So are their living Nagas, ordained as the residing keepers of these ancient hills, which we take for granted today.

Since the early days of the frenzied development in Paya Terubong in the 1990s, we have witnessed increasing incidences of floods, landslides, mudslides, rockfalls, soil erosion and rapid rainwater run-off that turns roads into muddy rivers whenever it rains cats and dogs. And now, we have dustier air and hotter climate to bear with.

Back to the November, 1997 deadly landslide on Bukit Kukus: massive hill cutting of the steep gradients was the norm there and this was extensively carried out despite recurring environmental signs that the worst was yet to come. Until our arrogance paid the price. Did we not provoke the Naga of the Paya Terubong hills? 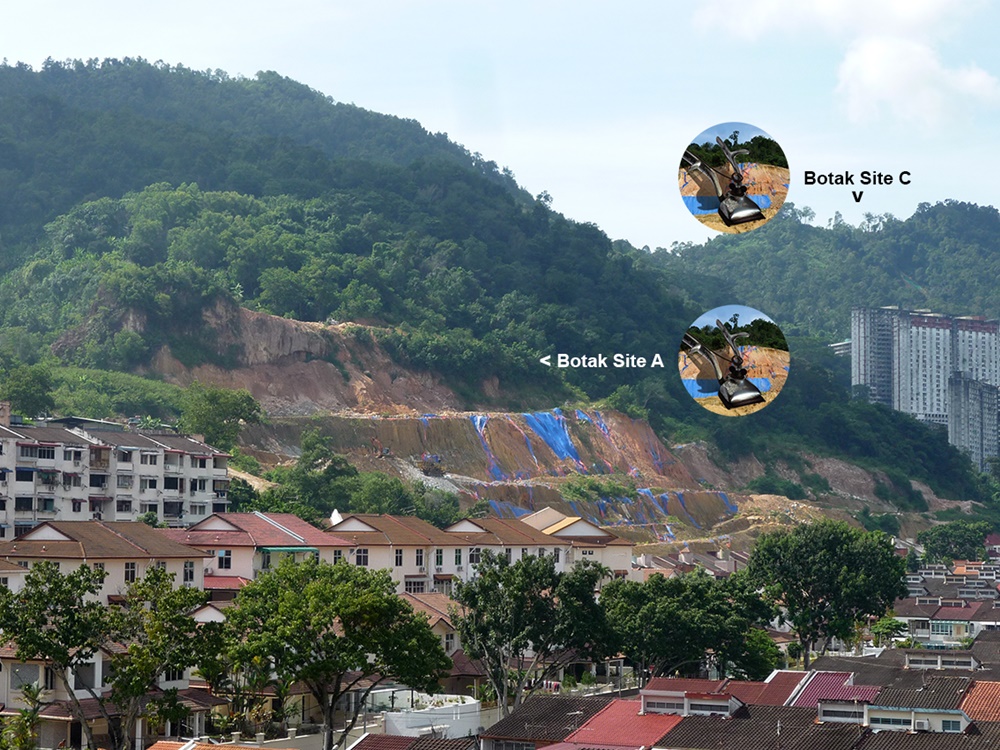 Take a Google Earth North-South view of the hill range of Bukit Kukus and Bukit Relau and evaluate the extent of botak hills and the dire environmental consequences should we persist further down the Naga’s unpredictable tail.

In the relentless botak hill pursuit of Cosmopolitan Penang, be aware that arrogance always gets another Naga’s tail wagging in the face. It is only a matter of when.

Note: The Nagas – imaginary, symbolic or spiritual – serve a universal eco-warning to humankind, that we are not to ‘play-play’ with Nature.

LGE and botak hill developers, want a free Botak Haircut?
Helps to have a clearer conscience after a clean cut, shiny shave and Delhi grab and twist of the head.
Use original American Clippers and Chicago after-shave foams.
Come to Little India barber shop (if you don’t mind our neighbor’s blaring Bollywood music).

Hello barber u charge gst or not?
My Chennai barber previously charged me RM6, now raise it to Rm7 plus another 40 sen Maslan Tax.

Hello CEO Maestro. CEOs don’t patronise small time barbers like us. Unless they are kedekut.
GST or not makes not difference to people rich like you. But for the poor to average folks, we no charge GST.
We may charge RM1K+GST for rich people like that fat mama in Putrajaya.

Rather than wait to vote anyone out of office, we need to ensure that the State Government of whatever type listen to commonsense. Today, with increasing signs that the world is suffering from environmental sabotage from those who only know how to exploit and destroy, we of Penang need to rally together and say enough…no more hillside/top development at all…no more plastic bags in drains, no more oil being put down drains leading to the sea, no more allowing raw sewerage to drain into the ocean, no more even considering reclaiming portions of the islands coast that are ecological goldmines… Read more »

Michael, I am with you there. If you read my posting, you will see what I mean. It is time for consultation and even withdrawal should this is needed. Since you mentioned New Zealand, having stayed there for more than 12 years, I can say that smack in the middle of Christchurch, there is Hagley Park, which is bigger in area than Teluk Anson, now called Teluk Intan. No councillor proposing the development of Hagley Park has ever survived an election following that proposal. The idea is that the people there view life and health as much more important than… Read more »

New Zealand has low population, more sheep than human beings, else the natural environment of the Middle Earth would have been plundered as well.

Read these news: http://www.freemalaysiatoday.com/category/nation/2014/07/08/another-botak-hill-in-the-making/ http://www.thestar.com.my/News/Community/2014/09/27/What-a-terrible-mess-Residents-fear-for-safety-as-mudslide-hits-their-area-again/?style=biz http://www.thestar.com.my/story/?file=%2F2010%2F8%2F14%2Fnation%2F6858552 http://www.thestar.com.my/News/Nation/2014/09/27/Third-mudslide-in-area-rattles-residents/ http://www.apartment-penang.com/2008/10/paya-terubong-landslide-destroyed-eight.html http://www.thestar.com.my/story/?file=%2F2008%2F10%2F23%2Fnation%2F2347738 http://en.penanglang.my/?p=2731 https://rexymizrah.wordpress.com/2014/01/04/bukit-relau-a-k-a-botak-hill-destruction/ http://www.buletinmutiara.com/quick-action-by-mp-surprises-residents/ http://www.thestar.com.my/News/Nation/2012/07/08/Bald-spots-are-evident-where-once-green-hills-stood/ And recall this particular news (pre-308 Angelic DAP): https://groups.yahoo.com/neo/groups/Mutiara-Net/conversations/topics/337 Excerpt: It is the responsibility of the state government to protect the safety of the people. The right to safe environment is a basic human rights. DAP calls on the Dr.Koh Tsu Koon led Barisan National state government not to compromise people�s safety for short term profit or exchange it with their personal political interests. DAP calls on the chief minister to direct all departments to take all proactive precaution measures to prevent another disaster in Paya Terubong.… Read more »

In Hobbit’s Desolation of Smaug, the naga of Middle Earth has been killed, leaving behind riches in gold.
Perhaps NFC could tap the goldmine with condominiums for the NZ sheep? Endless possibilities!

In the pursuit of “a few dollars more,” some Penangites are alas ready, willing and able to gamble with the lives of other Penangites and the families. As you yourself wrote, Tunglang, it is a disaster waiting to happen and when this happens, these same Penangites will be the very first to wash their hands as Pontius Pilate did in the Good Book. Nothing that they do after that will bless them with the soft pillow made of a clear conscience. Having said this, is it too far in the plot to stop this reckless challenge to nature and its… Read more »

Humankind is full of frailties. No exceptions to those who think they can pluck money from the air every minute. Behind the exaggerated abilities to make more money from any kind of economic endeavour lies a devil-may-care GREED mentality. No thanks to that hoarse preacher of “Greed Is Good” mantra, that Donald Trumpeter of Greed Apprentice. In the eyes of Nature, humankind is the worst of all living & extinct species in the animal kingdom. They create destructions (every where they go), hunt down endangered species, deplete natural resources at midnight whims & fancies, reengineer genetic codes in the holy… Read more »

That is precisely why, tunglang, we need leaders with vision, not half-past-six cretins posing as politicians who will sell their grandmother for a song!

It is an irony that Penang which used to export leaders to as far as Singapore, China and India, is today being run by a group of outsiders with barely any idea about our mores. Just study the composition of the Executive Council. I have nothing against any of them, but they will have to reflect the “preservative” nature of the Penangite soon and fast.

Leaders who acted ‘green’ in public cycling with 2,000 cyclists recently in Penang doesn’t sell anything but smacks of self-populist-aggrandisement hijacking the ‘green living concept’ but contrary to what is Greener & Cleaner Penang propaganda or snake-oil salesmanship. When the mind has reached the point of no return far away from the original socialist concepts & promises of 308, it is of no wisdom composition but is filled with all the developers’ pre-mixed cement of wealth-building, both for greedy corporates & political faux foxes. Time to chase out these politicians & KL + SingLand developers to the Andaman Sea, no… Read more »

We must vote DAP out of Penang in order to protect our Penang’s legacy !
OUT ! LGE OUT of Penang and you go back to Malacca !