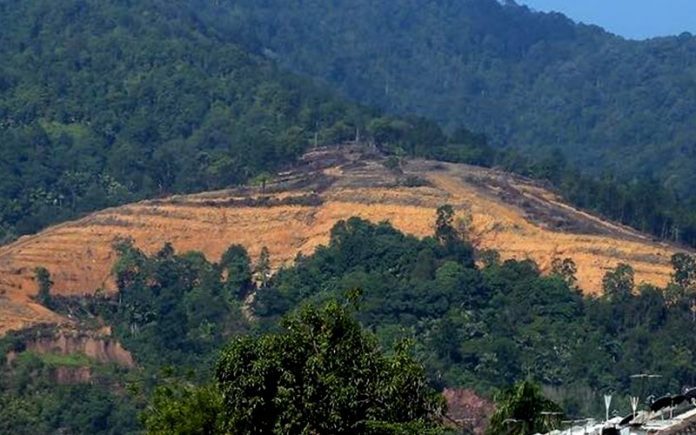 Recently I visited Ipoh for a weekend and got a closer look at the city at street level.

Ipoh is an under-rated city with hidden surprises, a rich heritage and some mouth-watering local delicacies such as salted chicken baked in rock salt, hor fun and special white coffee.

Back at the apartment I was putting up in, the hall opened up to the hazy majestic hills rising in the distance, bordering the Kinta Valley. But what was jarring was the bald spot clearly visible from Bukit Kledang, a sizeable portion of which had been cleared for oil palm cultivation.

Increasingly, wherever we go in the country, we can see signs of a certain form of development spilling over into public areas.

While in Ipoh, I couldn’t help recalling how, two decades earlier, the late Fan Yew Teng had fought a lone crusade to conserve karst areas in the Kinta Valley. Most of Malaysia’s limestone deposits are karst, which is landscape underlain by limestone. Full article on Aliran website

In the midst of PenangTolakTambak, a rare turtle highlights what is at stake

PUTRAJAYA, Aug 29 — As Pakatan Harapan (PH) approaches its second year in power and with the National Day around the corner, Prime Minister Tun Dr Mahathir Mohamad today conceded the general sentiment on the ground now is more pessimistic if compared to the same period last year.

He acknowledged that people were in a happier mood during last year’s Merdeka celebrations, as they were still reeling in joy after overthrowing the previous Barisan Nasional (BN) government at the 14th general elections.

PH is still in honeymoon mode?

Umno/PAS is coming up strong to recapture the Malay votes. Malays are beginning to feel that BossKu Najib was framed since he is still not locked up in Sungai Buluh!

Many Chinese are very unhappy over education issue. Instead of getting UEC approval, they got shock Khat/Jawi treatment! Also TBC case is still unresolved.

No botak hill in Singapore, but green corridor, SINGAPORE – A new green corridor will connect Singapore’s three national gardens when it is completed in the coming years, if plans to plug a gap in Singapore’s green links come to fruition. The 11km Bukit Timah-Rochor Green Corridor, which will run parallel to the Bukit Timah Canal, will give cyclists and pedestrians a continuous path between Jurong Lake Gardens, the Singapore Botanic Gardens and Gardens by the Bay. Construction for the first phase, a 1.4km elevated linear park that will lie above the canal between Bukit Timah and Dunearn Road, will… Read more »

Want to savour heavenly Penang Curry Mee? For Rm6.00 (Big with added liao) – you get worth-your-money liao of 5 (truly) fresh prawns (of 1.5inch dia), generous serving of blood cake (cooked pig’s blood) & deep fried tofu (tau pok). Soup is typical spicy of Penang’s Curry Mee ori-maestros. The chilli is dark red & spicy to bring out the sure drench of sweaty heavenly satisfaction! If you think of Basic without the added liao, just ask for the Rm5.00 (Medium). Do bring along a “Good Morning” Mini China Towel! Comparison Note: You won’t get 5 fresh prawns (of 1.5inch… Read more »

Anil how many of these delicacies have you crossed off the foodie checklist?

Wish I had seen this list before going to Ipoh!

Anil r u seeking retirement hpome base in Ipoh? If so right time to brush up cantonese now in preparation.
May be you can influence many readers who are fed up with concrete surroundings to migrate there and promote the street food there in the process.
Altetnatively you can opt for Taiping with more similarity to pre condo dominance Penang lifestyles

No, not about to retire anytime soon!

that is probably how your housing estate look like when it is first developed…….no complain then ??

Sounds like Anil is disappointed with Penang wanting to migrate to Ipoh?

Not sure if Ipoh has its own NGOs that demand this and that from its government.

I would say Anil is trying to ‘expand his scope’ to get new readers from Ipoh, as his Penang readership has saturated. Anil should also visit Sungai Petani and Alor Setar from time to time to provide his insight on the local issues, besides sampling local food (try ‘Ong Nasi Lemak’ and ‘Chai Poh Fish’ in Alor Setar).

Thanks for the ideas!

Save this playlist on hidden gems(food) of Alor Setar.

Must bookmark it. Thanks, Jordan.

Nasi Lemak that brings song to you.
Die die also must try!

She writes about her childhood memories living in JB. She is positive about JB and has a regular column on the monthly The Iskandar newsletter.

Anil can learn frim her to aporeciate the beautiful things in life, plenty in Penang and not to complain to suit the NGO agenda.

Thanks for the advice, but I belong to an NGO!

CIA has infiltrated the youth leaders … in Hong Kong, now they are flying the Uncle Sam flag.

The western democracy is the modern day opium that the HongKong youth are addicted to. Democracy and western-styled capitalism have failed to provide them with decent and affordabl dhousing. They fail to realise that the modern day China will provide economic prosperity, unlike they former political master that is facing the economic crisis of no-deal Brexit, with soaring food price looming.

The coming trajedy and disasters are hard to thwart. People are voting with their feet. The mentality of those who remain is becoming ever more apalling. Look at our leaders: (a) shooting from the hip and flip-flop (b) courting new friends (Turkey, Qatar, Egypt, new member UAE) in place of Saudis.

What NGO do you belong to?
Why not has its logo on your blog?

How to be impartial if you speak for a particular NGO?

I belong to Aliran. This is my personal blog (hence no Aliran logo here) and my views expressed here are not necessarily the offical position of Aliran.

I never claimed to be impartial. I am on the side of socio-economic and environmental justice and human rights.

Anil, Fighter from The Mighty River of Justice.
Keep up your good work. “Jia You” in the same spirit of HK protests!

I thought you belong to Penang Forum.
Maybe both.

What does it take to be an Aliran member?
Able to write?

Aliran is part of the Penang Forum network/coalition of several major Penang-based NGOs.

Any Malaysian citizen above 21 can join Aliran is they subscribe to human rights ideals and universal values such as justice, freedom, solidarity, etc.

You dont have to be a writer.

If you care to explore, there are plenty of good food in Alor Setar at a much affordable price compared to the overhyped Penang food!

Although the town (or city) has majority Malays, there are many types of good Chinese food around.

Anil: “Increasingly, wherever we go in the country, we can see signs of a certain form of development spilling over into public areas.”

Unsolicited quote from a relative stranger: “Malaysia still the best. Got money can do anything”.

The most important and effective way is to ban the formation and outlawing race/religious based political parties. As it is now, a lot of damage has been done by these parties. There are so many things to talk about – economic well-being, reducing poverty, raising the standard of education but all these jokers harp on is religion and race. Unfortunately, the Govt seems to be lost in confronting these and has not got its act together. This country must grow based on the unity among the races but it has become the mission of some to divide the people and… Read more »