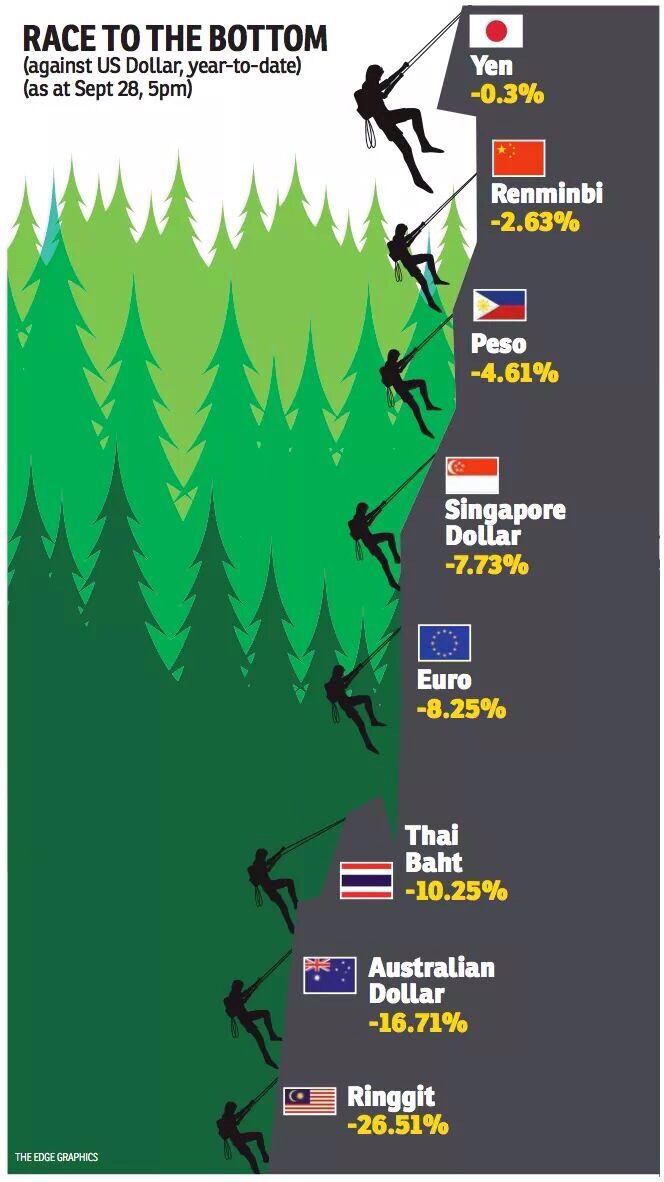 Check this out, the position at 28-29 September, courtesy of The Edge.

And the end is not in sight. Another key test looms this week.

Reuters reports that as RM11bn worth of Malaysian government bonds mature on Wednesday, foreign investors, who hold 45 per cent of outstanding bonds, could pull up to another billion US dollars out of Malaysia’s bond markets rather than reinvest.

This could push the country “a step closer to a currency reserves crisis that would send shudders across the region”.

Although Najib has denied any wrongdoing, a series of international investigations are under way into 1MDB’s affairs.

In the meantime, weak prices for Malaysia’s liquefied natural gas exports are eating into its trade surplus, there are concerns about its ability to repay its massive short-term foreign debt and the banking system has seen an erosion in ringgit deposits.

What will it take to stem the slide in the ringgit, which has also nudged up the prices of imported groceries.

Meanwhile, Shell Malaysia is laying off 1,300 upstream jobs out of its total workforce of 6,500 over the next two years.

And where is our Finance Minister?

PSM’s Arutchelvan noted: “Simple food items like chapati used to cost RM0.60. Today it costs RM.160 as cost price has increased from the flour that is imported from India. “The government is encouraging Malaysians to buy local products but at the same time there are not enough avenues for the local industries to grow. Just look at the property market that has taken up land which could be utilised as farmland and agriculture. People are opting to buy second or third-hand houses because they have no choice and cannot afford first hand houses. This proves that land utilisation has gone… Read more »

I used to kau-kuan Nasi Kandar from this corner stall (near a Chinese shrine) in Batu Lancang Market Food Court. Now what I get from ordering 3 Dishes+Nasi Putih Combo is: 1) 25% smaller Ikan Kari or 25% smaller Fried Chicken Thigh (my 2 favourite choices of Combo) 2) Cucumber & Pineapple Salad also reduced by 30% 3) Fired Egg remains the same size (maybe it’s insanely harder to fry an egg & reduce the egg white + yolk) + Nasi Putih still the same amount but the Curry is not as generously splashed as before. And the price hikes… Read more »

Oh, I have seen that stall!

Go for vegetarian meal of 3 dishes free soup around RM4 only.

3 millions chicken reported dead in northern malaysia likely choked by haze.
Fish stock declining due to over fishing.
So go for vegetarian ones although understandable also hike in price as tell me what never up up under lavish spending be-end.

JHO Low who enjoy lavish birthday party with Britney Spears, per SR if you can access, never know the sufferings he created for Penangites!

Fish stock falling also due to sedimentation and siltation and pollution.

Vegetarian meals also hiking prices many months ago! I used to frequent this vegetarian shop next door to Farlim Group’s Main Office in Farlim. For a 3-vege-dishes+rice combo, it used to cost Rm3.80 (provided you just scoop 1-2 spoonful of each dish) suitable for a slimming monk. As a 6-footer, this was too ‘decent’. So I would just add a few more spoonful of my one favourite dish to the other 2 smaller dishes suitable for a slimming monk. And it used to cost Rm4.50. AOK. Now, it costs me Rm5.00 for a 6-footer meal. I tried to save by… Read more »

Forum – 1MDB: Will Malaysia Survive or Najib Survive?
Gerakbudaya bookshop, Petaling Jaya 29/09/2015
Tony Pua: How Your Money Via 1MDB Has Gone Out?

Life getting tougher as our purchasing power has been eroded with devalued ringgit.
We can forget about overseas vacation, and unlikely for many to send their children for overseas education, even to Singapore.
We certainly need a change of government to reverse the fortune of the country!

Ambiga Sreenevasan: What The Rural Malays Want Is An Alternative To UMNO

Six years as PM and Finance Minister, Najib has failed in his transformation effort to steer our economy away from the dependence on palm oil and petroleum, and also did not reform the NEP to stop rent seeking among the Umno cronies. With scandals surrounding him, I guess his days are numbered. Really cannot stand that he and his wife still could go for Islamic fashion show in Milan on his way back from US using the private jet! Chinese Premier Xi flew on Air China but Najib chose not to use MAS!

Today Nades on The Sun tells us how the rent seeking is ptactised in Bolehland for easy money after getting government contracts or license.

Embattled Brazilian President Dilma Rousseff has closed eight ministries and reshuffled her cabinet, cut 3,000 workers in a nod to austerity. Ministers will have their pay cut by 10% to further reduce spending.

I think Najib should do the same to trim his bloated PM office and civil service, in order to help our economy.

Air China planes have no Ang Moh remote control to auto-steer her planes over the Gulf of Thailand towards Diego Garcia. Why want to take the calculated risk like MH370? Especially in these hazy skies where nothing can be seen happening in broad daylight.

China groceries especially vegetables to cost more now with unfavourable exchange. May be we have to consume palm products more as significant local land not cultivating green vegetables but for palm oil…..

As prices of basic items getting expensive in local wet market, those lower income folks will begin to understand how the 1MDB scandal is affecting the economy of our country. Not sure how Najib can continue to buy their support with BR1M as the nation is saddled with more debt.

Soon the Umno minister will ask us to Ubah Gaya Hidup and grow our own vegetables!

The current haze is a prelude to gloomy days ahead?

Shell Malaysia is cutting 1,300 jobs from its upstream division over the next two years in a bid to stay competitive in a low oil price environment. The job cuts represent 13.3% of Shell Malaysia’s total workforce of about 6,500.

Is this the beginning of a new wave of retrenchment due to weak economy and falling Rinngit? What can Najib do in his upcoming budget when the nation’s reserve is dropping while the debt is rising!

My neighbour told me her daughter working in Singapore now can send me more money as one Singapore dollar now can exchange for RM3.07 at JB money changer. We can expect more people to head south to work in Singapore to earn higher wages, not believing in Najib’s claim that we will be a high income nation by 2020. Possibly Najib is saying that most of us can be millionaires once the Ringgit is devalued to be on par with Indonesian Rupiah?

Yesterday For 2 hours in the afternoon the money changer could offer RM311 for every S$100 cash!

Why does najib care he has already pocketed the balance of his USD700 million – courtesy of Malaysian taxpayers(?)

Adding on, there are more and more unique Malaysian stenches coming out every now in the international news.

Those stench are well deflected by the lies from Utusan and TV3.
So the rural and uneducated Malays will still think Najib is doing a great job, like able to play golf with Obama, and able to speak at UN, despite little audience present!