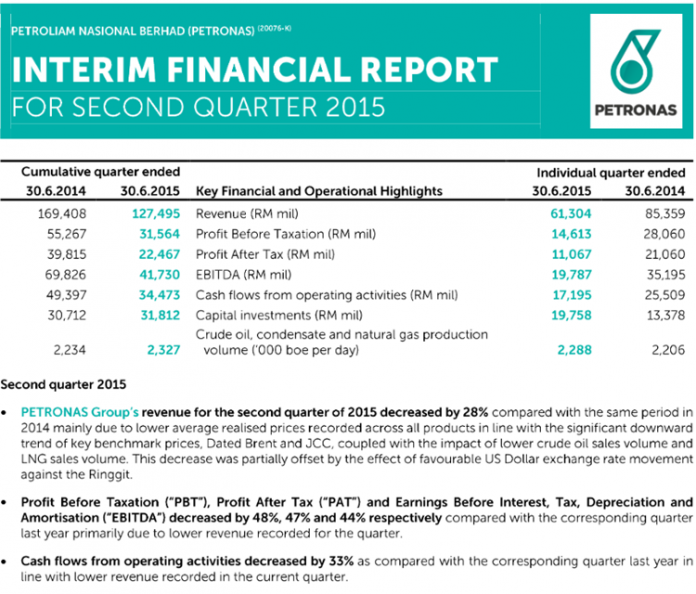 Petronas’ profit before tax has slumped by about 43 per cent so far in the current financial year and this is bound to have an effect on government revenue and Petronas’ own reinvestment plans.

In fact, profit before tax was almost halved in the second quarter compared to the same period last year while cash flow from operating activities dropped by a third.

Petronas accounts for RM26bn of the government’s annual budget. So far, the national oil company has contributed RM13bn to the government this year. But it is going to be tight for both Petrona and the government budget with slumping commodity prices.

This is what the Petronas CEO had to say:

I do not expect our cash flow from operations this year to meet our capex and dividend commitments. This means we will have to persevere through with more austerity measures, and will have to draw on our cash reserves.

And income tax collections are expected to fall as well. Where does that leave the government budget?

This excerpt from the Asia Sentinel spells out why the coming year is going to be tough for us.

In the current fiscal year, Petronas contributed RMB26 billion to the budget, with another RMB26 billion taken from the Petroleum Development Tax, for a total of RMB52 billion from Petronas reserves. Officials are privately forecasting that because of the collapse of oil prices, the two funds will contribute only RMB10 billion each, leaving a shortfall of RMB30 billion.

According to in-house figures, income tax collections are expected to fall by 20 percent to 30 percent from RMB160 billion in fiscal 2014, a drop of another RMB30 billion to RMB50 billion owing to weak consumer sentiment and the slowdown in business activity. Operational expenditure for Fiscal 2015 is approximately RMB230 billion.

“They can’t reduce it unless they begin to cull civil servants,” a well-placed business source told Asia Sentinel. “The deficit is 52 percent, with off-balance-sheet contingent liabilities another RMB18 billion. That’s like Italy and Spain and we haven’t taken into account 1MDB yet. How are they going to borrow? The ratings will be horrendous next year and cost of borrowing very high given Malaysia’s junk status. I fear they will start selling crown jewels, such as assets in government companies.”

According to Bloomberg and Reuters, 45 percent of bonds are held by foreigners, who are likely to bail out and redeem them as soon as they come to term. The bonds are spread over several years, so the foreign redemptions are not expected to pose an immediate problem. But domestic redemptions may well be. Some RMB33 billion in bonds are expected to come due in the next quarter. There is no reason to believe domestic investors in government bonds are going to be any more enthusiastic about them than foreign investors, although a significant proportion are probably held by government-linked companies that can be jawboned into renewing them.

I think this goes to show the following:

Warning from YB Liew Chin Tong: The era of high oil prices is over! The era of high oil prices since the Iraq war in 2003 (punctured briefly in 2008 by the Global Financial Crisis and resumed as US Fed loosened monetary policies in 2009) is now officially over. When Budget 2015 was presented in October 2014, Brent (reference oil price) was estimated to be at USD 105 per barrel. The Government had to adjust the budget in January 2015 to bring the estimate Brent price to USD 55. The 2016 budget estimated that Brent would be about USD 48,… Read more »

Malaysian young adults are accruing debt at an early age, a survey by the Asian Institute of Finance (AIF) has revealed, while some 40% are spending more than they can afford.

The survey among Malaysian “Gen Y” respondents between the age of 20 and 33 were living on the “financial edge” and were facing money stress, with the majority living on high cost borrowing of loans and credit cards.

Do not forget there are 200000 unemployed graduates with degrees in Malaysia.
http://www.theantdaily.com/Main/A-whopping-200k-unemployed-graduates-in-the-country

Wasted resources? Why then still depend so much on imported workers?
Why the country cannot have jobs for these graduates?

Local universities produce low quality graduates because of its kulitfication policy ignoring meritocracy. Simple as that.

Poorer economic conditions may / most likely hit pet dogs & cats – once lovey dovey pet owners may have to ditch their pet loves by abandoning them thro’ the backdoors.
High costs of pet food may be reserved for the richie pet owners. Middle income pet lovers may have to prioritise shrinking budgets for their daily 3 meals & family needs more than owning + feeding pets.
The same goes for other pursuits in life – kereta gaya, Genting gambling, branded shopping, Kimmy Garish-like restaurants, etc.

It all depends on whether one has a heart or a binchooi to maintain at all costs.

Be on the lookout for more ways to stealthily tax the people.

Oil price plunge and less income for Petronas in turn less payout to those warlords to sustain their lavish spending e.g. during election, and may be they can throw frustrations at those who earns in hard and moral ways?

The country is blessed with oil, but the government did not use the oil revenue to improve other sectors of economy, thus the GTP transformasi is a failure to me as reflected in the plummeting value of Ringgit.

For non-gomen aoded people like me on the streets, Petronas fortune up or down no impact on me as my daily meals of 1 meat 1 veg are always on the rise.
Hopefully Anil can gather readers info on where to get filling yet truly economical and healthy meals for 4,5,and 6 footers. 🙂

KiniBiz magazine in its latest issue on Car Wars said Honda Jazz is only RM36K and Toyota Altis is only RM46K in Indonesia. Here we are paying almost 3 times more to subsidise the survival of Proton! GTP to keep Proton afloat?

I wish Hooray can set up Chap Fun No GST stall selling dishes below market rate for any dish + rice combo. I will be the 1st customer turns loyal for as long as Chap Fun stall is operating. Then many in the streets can shout Hip, Hip Hooray!!!

Chap Fun economy rice stalls can thrive in economy of scale ie more customers to cover cost. No need fancy advertising, air con, urban fast food concept as long as the set up is clean while the food is nutritious and yummy ok ok good enough for non-binchooi ordinary folks.

Six months down the line after GST was implemented, Malaysians, especially the poor, have now realised that costs of living has increased drastically as most traders and retailers are compelled to pay GST.

With the introduction of the Trans-Pacific Partnership Agreement (TPPA), the cost of medicines and other goods that originates from Western countries will be further increased as the release of cheaper generic drugs will be deferred for eight years.

Can be balanced. All private entities , private companies and many prudent & responsible govts around the world does the same thing. This govt employs well over 1.4 million personnel and pays over 65.6 billion wages(year 2014 civil service) Scale down intakes /pay freeze/ pay cut/lower or no bonus/abolish First Class perks. Those due to retire at 55 retires them immediately. Leader must set example- No more flying to NY and Europe, use the teleconferencing technology. Cut Sri Perdana water & power bills by 50 % ( power cost 2.23million as reported in 2013). Cut down motorcades and have govt… Read more »

Out of those alleged 1000 so people who were present to welcome their ‘hero’ Najib back from his most recent overseas trip to NY and Milan, how many of them were civil servants accompanying their ministers like Zahid, Hishamuddin, Liow TL and Subramaniam? Who actually bear the expenses of the welcoming party?

Amno, perkasa, isma , red guards are dunggu and pea brain to blame other races. Take a good look at who is mis-managing the status. In many countries which depends on oil, a sovereign fund is set up for the oil money so that future gen can use it when oil runs out, but amno dig and dig. Good luck to our future gen

If BN set up a sovereign fund, it will suffer the same fate like 1MDB with so many dishonest politicians with personal greed agenda.

Wow. They have finally killed the goose that lays the golden eggs.
I predict, they will raise petrol prices some more, and “borrow” from EPF.
Cut allocations to opposition held states.

Its not the proposed budget that is the issue. Its the supplementary budget that will come very quickly after the proposed budget is over with which will sneak in the expenditures and borrowing they have to do.. Revenue can be plugged for example, ending the many GST exemptions now given.. Its simple and quick to raise money. Its not the issue. The issue really is they will borrow against any taxes and fees raised to spend.. It looks like the deficit gets worst a little at first but if they had not raise taxes, the deficit is actually growing.. Najib… Read more »

1. Sack Najib & his government pronto not tomorrow not in 2017.
2. Make Petronas accountable only to Parliamen
3. Sell all GLC companies including MAS
4. Hair cut to civil servant head counts at least 40%
5. Cancel toll roads agreements, monopolies & IPP which were negotiated at disadvantage to taxpayers.
6. Sell all government planes
7. Cut the number of ministries & perks of members of Parliamen

Vote out BN and the above points can be achieved.

Add one more: Kill off Proton!