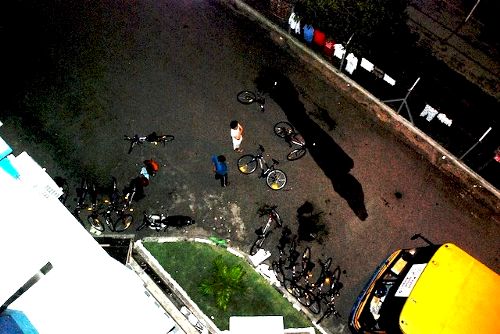 The Jerit cyclists continue to be hit by one obstacle after another.

In a pre-dawn incident today, unknown arsonist(s) torched eight of the Jerit bikes in Penanti on mainland Penang, where the cycling team were spending the night. Three of the cycles were badly damaged.

The four dozen cyclists were not to be deterred and continued their journey south.

Later today, at around 6.00pm, ten Light Strike Force personnel and 15 police personnel stopped the cycling team at Bagan Serai, reports a Jerit source. “The place was crawling with police, who seemed aggressive. They were after the identities of the cyclists.  The organisers refused to allow that and said the police could have the organisers’ IDs instead.”

After negotiations, the cyclists were allowed to proceed with their journey to Parliament. The cyclists are spending tonight in Taiping and Bagan Serai.

Over in Johor, despite obstructions yesterday by the police, 30 cyclists from Jerit’s southern team continued with their journey, moving north from Simpang Renggam this morning.

Why all these obstructions? Why so much fear and anxiety about workers and marginalised communities demanding their rights and a minimum wage that would allow them to live with dignity?

…one day these samsengs will make Malaysia famous but for the wrong reasons. ….

Outrages, indeed. The people can guess very well who are these criminals involved and the darks hands behind this incident. It’s pathetic, really.They have never hauled up and charged those from the most corrupt party who uttered seditious words against the people… Why are they targeting on the peace loving people? Will these arsonists be caught and charged? Your guess is as good as mine. They must have … forget totally about their own roles in serving the people by curbing the crimes. Already thousands of foreign students are afraid to come to Bolehland due to the worsening crime situation… Read more »

What trivial, petty stuff to work on for the Police. One need not wonder why crime rate, lack of police resources to nab real criminals are on the rise. Like they said, time will reveal the truth, eventually.

The police does not have better things to do??

…pdrm … engaging in terror methods to (oppress) the rakyat just like their brethen … of the west plundering and denying the poor arabs’ rights to live peacefully in west bank. We must always uphold nep – never ending protests for a fair & just system for all rakyat irrespective of class, race & religion. Peace & prosperity to the people of the world!

don’t let the cowards stop you from this noble project, the whole world know who they are, continue your journey to pursue your objective and don’t place any hope that the police will be successful in this investigation. good luck and see you all in parliament on 11th. of novenber.

… on the police.. I’ve never like them before and never will.. I always come across poliemen conducting road-blocks in a dack alley ..

If u can notice (many of them) are all “perut buncit” … They should spent more effort to nab snatch theif rather than stopping innocent cyclist..

The Rakyat never find these event nuisance, so “botak” hamid dun always use the “rakyat” as an excuse, u might as well say UMNO don’t like it.. cause u and the Police (are perceived to) represent UMNO!

Nothing to say
Nothing to call
Only the perception
People know

Is it so difficult to see that a society needs to care for those who are marginalised and poor?

What will any decent human being do if driven to hunger and desperation?

Terrorise them, bully them and haunt them like animals some more and you just watch what they are capable of doing in society!!! Well done UMNOPUTRAS!!!

This protest is an outpouring of citizens’ outrage at the injustices of the present gomen, which is that tryannical umno! umno never ending ‘plundering’ of the country… Our country has to be protected from these umno ‘plunderers’…

aaa said: its more like an embarrasment to the BN-led govt for neglecting a large segemnt of the marginalised society. but such bullying tactics will only put the govt in a really bad light. You hit the nail on the head! Umno/BN thinks the rakyat should be docile & accept being misgoverned without protest. Being allowed to vote once every 4 or 5 years is bad enough a compromise – see what happened the last time? But they just can’t tolerate seeing the rakyat acquiring initiative & taking firm steps to call for change. The rank & file are only… Read more »

KEEP ON TURNING TO COUNTER CHURNING

This is a clear case of “terror” where young Malaysians trying to stay healthy by the older and slower mode of transportation were harassed by the so called guardian of national security. Cyclists are even detained and released on bail. Where is this country heading? Let the government also ban “le tour de langkawi” because there are much more cyclists and many roads will have to be closed causing great inconvenience to the people and as if we are being frenched, when to go dutch is better. Calling Malaysians to unite and you have only one right and that right… Read more »

UMNOPutras must be feeling the heat. That’s one thing. But why should the police bother? UMNOPutras have been organising road trips using Mat Rempits and super bikers that were even given police escorts (as if Police didn’t have anything better to do than escort UMNOPutras). Why the different atiitude with this one? Apa dah jadi dengan Piagam Polis? … dengan slogan Bersih, Cekap, Amanah dan Kepimpinan Melalui Tauladan? Mahathir’s (dirty) ways has infected everything he touches it seems. It is precisely the fact they are not answearble to anyone but their UMNO bosses that such blatant double standards are employed.… Read more »

goo and go we suport u all the Jerit cyclist

These Special Branch/ Strike light force are really bad news. They are essentially … bullies in uniform set upon civilians.

i dun think the jerit cyclist were being rude by going to the hotel where the government was having a economic plan for penang or sumthing but instead it was reminding the penang government tht they must do their work. hey anil.. gary nair of PRM is PARTI RAKYAT MALAYSIA ah ?

umnoputras at work? if so, then they dont understand the meaning of human rights and freedom of expression. anyway, dont see how these people can be a national threat. its more like an embarrasment to the BN-led govt for neglecting a large segemnt of the marginalised society. but such bullying tactics will only put the govt in a really bad light.