Kg Tanjung Tokong villagers are appealing to Prime Minister Najib Razak to fulfil his father’s promise for their village. 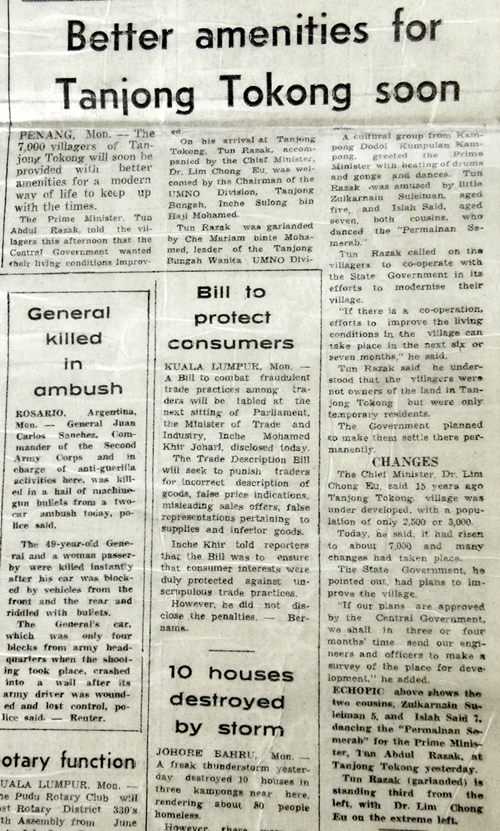 Razak’s vision as reported in The Straits Echo, 11 April 1972 – Photo by Anil

During a visit to the village in 1972 accompanied by Dr Lim Chong Eu, then premier Abdul Razak told villagers that he understood that they were “not the owners of the land” but only “temporary residents” of the 200-year-old settlement.  Nevertheless, he was reported as saying, the government planned to make them settle there permanently.

The late Razak said the government had plans to improve the village and provide its residents with better living conditions.

But more than a quarter century later, Uda Holdings, owned by Khazanah, has declared the villagers to be “setinggan” or “squatters”.

The villagers are now appealing to Najib, who also heads the Finance Ministry, which owns Khazanah, to get Uda to return to his father’s original vision for the village and to live up to Uda’s social responsibility, says Mohd Salleh Yahaya, head of the Kg Tanjung Tokong residents’ association.

Improving the village, he adds, does not mean demolishing its houses, but rather improving the historical settlement with better amenities as Razak had envisioned. Development, asserts Salleh, has to blend the modern with the traditional.

BN & UMNO under Najib could not even fulfill his father promise to the Tg Tokong resident, lest alone how could he fulfill any promises to the people. His rhetoric are just lies and half truth out to hook wink the people. Koperasi has approved the government proposal to build 24 double storet house and this is the promise that has been fulfilled by LGE and Pakatan to the people and resident. Looking at it Najib 1Malaysia are just zero KPI filled with true lies and half truth.

Remember Bagan Pinang…….I am not saying that people there are stupid…..You see in biblical history. Such people were like some Isrealites groaning on Moses after liberation

Anil, what say you?

Jong, ‘Morning Dew, UDA may be under federal govt control but Tanjong Tokong is under jurisdiction of Penang State govt, they still need the state’s nod and co-operaton like it or not. Sensitive project that may be politicised either way, not worth jumping in just yet.’ Under the National Land Code, once a piece of land is taken by a Federal agency the state government basically have not much of a say left in the matter. UDA will still have to comply with the usual procedures and laws surrounding any projects but the State government CANNOT stop the project or… Read more »

Fools! Yes, these KTT villagers are fools taken for numerous rides. After 52 long years and they still believe in what umno says? These umno people had been lying to the whole country all this while, and here you still have fools believing in them! Tipu 1Msia. That’s what the slogan is all about, come rain or shine!

Plus one clown from UMNO saying that UMN should not give face to Gerakan……..

Tsu Koon was in power for 18 years not because of Gerakan’s competence in running Penang but the fear that UMNO would overun it.

Penangites would not be that stupid in voting in Gerakan again. Especially with people like Gerakan K within Gerakan

Morning Dew, UDA may be under federal govt control but Tanjong Tokong is under jurisdiction of Penang State govt, they still need the state’s nod and co-operaton like it or not. Sensitive project that may be politicised either way, not worth jumping in just yet.

It has been 37 years and yet BN Gerakan & UMNO has done nothing to improve the villagers and better living conditions. As always it is … all lies that is 1Malaysia. Even though PM Najib who heads the Finance ministry which own Khazanah and inturn own UDA, he would not bother to negotiate for a higher compensation on the RM75,000/= 850 sq ft flat that the Tg Tokong residents has been given. LGE on the other hand and with his hand tied negotiated with Nusmetro for a 1400 sq ft double storey house for the Kg Buah Pala resident.… Read more »

Yang,
Plus kenna condemned about it. I mean LGE’s effort. Plus, someone says that the loss of Bagan Pinang is attributed to this

What a joke! BN is no more in power in Penang that’s why you don’t see the arrivals of bulldozers into Tanjong Tokong! So they lie low for time being, also an opportunity to gain political mileage that they badly need by bringing out his father’s name and promises! Politics!

Jong, UDA is under federal government control. BN now has a good opportunity to demonstrate that they can do one better than PR government in penang ? Will they ? If they do because they wanted to show PR up then they are shorted. If they do because it is the fundamental principle that motivates them then they are resting on very strong foundation.

Just like Kg Buah Pala, this is an injustice.

Let us see if BN, Gerakan, UMNO and Najib 1 Malaysia can give what LGE gave to Kg Buah Pala residents. Gerakan K and SUGU please wake up …..zzzzzz from your slumber

What a great snapshot. But the story is badly done. The real UMNO over the years – Promises broken from father to son…