A memorial vigil for Mey Sichan, a Cambodian domestic worker found starved to death, was harassed by a few hecklers at Speakers’ Square in Penang yesterday evening.

Her employers are being charged with murder.

This is just one of the many cases of abuse of migrant workers in Malaysia.

The organisers of the memorial, Jaringan Utara Migrasi dan Pelarian (Jump), condemned the act. During the vigil, attended by around 60 people, they highlighted the plight of migrant workers in Malaysia and how some of them are exploited and mistreated.

Several individuals intent on taking over the stage heckled and disrupted the proceedings. They accused the organisers of promoting “Irene Fernandez’s agenda” and said they wanted to speak on a more ‘important’ issue.

But organisers managed to complete the memorial programme before any major shouting took place.

Report on the vigil from The Malay Mail below:

Vigil held for maid who was starved to death

An individual signs JUMP’s call for justice campaign for Mey Sichan’s who died of prolonged starvation on March 31.

GEORGE TOWN: The death of 24-year-old Cambodian Mey Sichan was given justice today during a candlelight vigil and a signature drive organised by the Northern Network for Migrants and Refugees (JUMP) at the Speakers’ Corner this evening.

Mey, a domestic helper, who weighed at 26kg was found dead in a Bukit Mertajam house allegedly due to prolonged starvation on March 31 after working here for eight months.

Her employers, hardware store owners Soh Chew Tong, 43, and his wife Chin Chui Ling, 40, were charged for murder on April 13. Their case is up for mention on June 7.

A group of 60 persons from various human rights NGOs and individuals gathered with candles, sang songs and called for justice for migrant workers who suffer in the hands of their employers.
sichan1 [3]

JUMP representative James Lochhead said the event was organised to remind people that Mey’s death cannot be in vain and her voice cannot be forgotten.

“We say enough is enough. Please stop deaths an abuses on migrant workers, domestic maids and refugees in Malaysia.

“We condemn the murder of Mey as well as the climate of abuse that allows domestic workers to be treated as slaves without adhering to many basic standards of human rights,” said Lochhead.

While pointing out that Mey’s death was part of nine Cambodian maids who have died during employment since last year, he said one of them was Choy Pich 22, who was found dead outside her employer’s house in Penang in July 2011.

He said there are about a quarter of a million domestic workers here and several documented abuse in the past have led countries like Indonesia and Cambodia to suspend the supply of maids in June 2009 and October 2011, respectively.

“Her death has to be the impetus to the question if Malaysia’s progressing economy has to be on the backs of migrant workers and domestic labour.

“Work done that Malaysians don’t want to do yet is fundamental to the country’s economic success. Therefore, we ask why progress comes without basic human rights for many,” he said.

Lochhead highlighted nine demands the government should look into including the recognition of domestic maids as workers under the Employment Act 1955, a day off and limit to working hours.

A Cambodian Embassy official Kosal Chhay said he ‘almost could not believe’ that Mey, a mother of four, died of prolonged starvation because it meant that she ‘got serious punishments from her employer until she died’.

“Now, our new generation enjoys freedom of life but why do my people like Mey meet such bad circumstances similar to that under the Pol Pot regime between 1975 and 1979?” said Chhay, whose statement was read out by Lochhead.

“I suffer for Mey. I don’t know how to describe my feelings! It is more and more painful to this she met with this misfortune,” he said, while questioning Mey’s death. 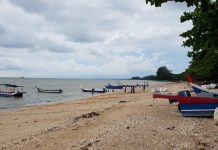 If i were the mother of the Perkasa heckler, I’d be very ashamed to have given birth to that beast of a person. …

Some people can be unbelievably inhumane. I hope his family is forever cursed.

This … bloke didn’t know the issue of permits for immigrant workers is under the purview of Malaysian Immigration Department at Putrajaya. Perhaps, his (business) employed many underpaid & abused immigrant … workers for … long work hour regime(?) NGOs fighting for such abused immigrant workers are his (and the likes of black cake vendors) nightmare but still he could conveniently spread lies against the state gomen for such sordid state of affair committed in his own back lane. Who is crying wolf? Never miss the racist roti canai at the narrowest lorong off Macalister Road for more than 10… Read more »

I think it may be a good idea to make some copies of the videos of the Perkasa goon’s antics.

The head goon aka Raja Katak has said that he intends to stand in the coming elections, so it would be nice for the electorate in whichever constituency involved to be able to see for themselves just what Perkasa stands for.

No respect even for the dead, especially when the deceased was a poor victim of abuse. Just when I thought they’d shown us their rock-bottom level, they prove me wrong with an even more despicable stunt.

My goodness, i really dont believe these Perkasa goons … at work again !!!

This bunch of idiots are a big shame to their own religion !!!