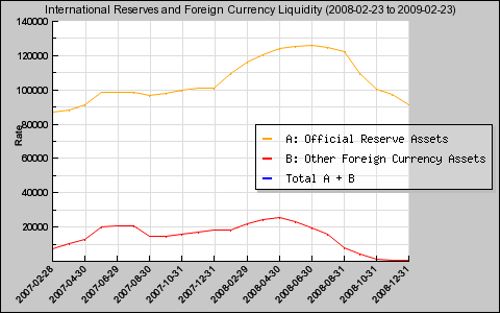 Let’s zero in on the third quarter of 2008.  During this period alone, Malaysia’s foreign reserves fell by RM31.5 billion.

The breakdown of this balance of payments deficit is as follows:

Capital and financial account: RM61.5 billion deficit (an increase of 400 per cent from the second quarter!)

So it is clearly that funds have been flowing out of the country from the third quarter onwards.

That said, the foreign reserves of US$91.6 billion (as at 13 February 2009) are sufficient to cover 7.6 months retained imports and 4 times the short-term external debt of the country.

Despite my utter contempt for BN and its cronies and for the endless harm that they have done and are doing to this Nation, I feel a tinge of sympathy for Najib that he had the urge to take on the job of PM in the worst of times…. Anyway, that is what politicians are good for and that is the innate quality of men who hanker for high office. They (bring) someone down and in the end get themselves (brought) down. Look at TDM. He is a very good example of one who has been cut down without his… Read more »

Notice that since March 2008 after the Political Tsunami the Malaysia foreign reserves diminishing quickly and very scary. This show that something was very wrong.

RM 56 Billion fleeing out from the country, what happen? confidence crisis or corrupted money ? If the purging of the reserves won’t stop and prolong until this years what will happen to this country?

Without the US engine, ie a big spender, growth will be very slow from now on. Europe and Japan are also half dead. Brace yourself for a very rough ride ahead.

Pat192, You have to be registered first before you’re permitted to comment. First, write to [email protected] with your name,email address,contact number and desired user name. Also include a little introduction of yourself and your reason for wanting to comment. They will then revert to you with a password. When you want to comment, you’ll have to go to the contents page and login with your user name and given password at the top right hand corner of the content page. A comment box will then appear at the bottom of the page for you to write your comments. Hope this… Read more »

Malaysians are looking at an impending economical disaster.Thousands of Malaysians are on the way to loosing their jobs. I was told by reliable sources that,a number of multi nationals are in the process of relocating or shutting down operations.Even some banks are (said to be) on the brink of collapse.Well I do not know how far this holds water,but what I know is that,its imperative for the Malaysian govt leaders to rope in the brightest and the best brains in the country to get to the bottom of this serious economical issue immediately.Failing to do so will spell disaster for… Read more »

aiyah, the RM fall from RM 3.50/USD to RM 3.80/USD. That’s 10% already. Not all reserves are kept in USD, so already kena from currency speculators

Someone up there mentioned boycotting the USD. LOLLLLL.

Which country is going to accept your Ringgit when you import? Where do they get Ringgit to pay you when you export? Remember, there is no offshore trading of the Ringgit. Who wants Ringgit anyway except those currency speculators waiting to hammer us?

So, can you now imagine when you have low or no foreign reserve?

I dunno about you but I’d get me some gold & silver. Fiat money and especially US Fiat is finished. Just a matter of time…

That worked out to roughly: RM 4000/= per living person in Malaysia (based on a population of 26 million). RM 4000.00 vanished in eight months. That’s five hundred ringgits we could use monthly !!!

I also had difficulties in accessing RPK’s website. Had to try continuously. I believed d establishment is doing its level best to block. Just keep on trying. Best is to revisit the earlier news u had seen or read.

Hai bro Anil,
Sorry, need to use your column to get some help from any bros out there.
Can someone please help out. Can’t seem to log on to RPK’s blog…
Wonder what’s wrong.