Another tax! A new ‘tourism tax’ ranging from RM2.50 to RM20 per room per night will be imposed on all hotels, budget hotel and guest houses with not less than 10 rooms in the country, beginning from 1 August 2017.

By the way, tourists also includes Malaysians staying at a hotel. (“Tourist” means any person, whether he is a Malaysian national or otherwise, visiting any place in Malaysia for any of the following purposes, namely… )

The rates are as follows:

The tourism tax rate is fixed according to the ratings below:

The tax is supposed to be used to “develop the tourism industry” and to “protect, preserve and conserve Mother Nature, culture and heritage…” (What is the GST and corporate tax for?)

Maybe they got the idea from Penang, which already has a ‘Local Government Fee’ of RM2-3 per room per night imposed on all hotel guests from 1 June 2014. (What is the assessment rate for?)

One small hotel manager in Penang I spoke to lamented the new tax: “Mini-markets are already suffering from the GST,” he said. “Now it is the turn of the hotels (with this new tax).”

Those inclined toward Cuti-cuti Malaysia will now have to cough up this new tax.

According to Minister Nazri, this new tax could raise RM655m to RM873m based on an overall hotel occupancy rate of 60-80 per cent.

More information can be found here. 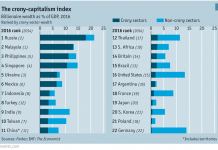 Crony capitalism: Malaysia is no. 2 in the world!

The proposal will be presented at the next Pakatan Harapan presidential council meeting, she said.

“Putrajaya’s failure (in raising the tax) is seen in the withdrawal of the Sarawak government from the Tourism Malaysia Board. This is a poor political indicator for Barisan Nasional,” Wan Azizah said.

Kit Siang: Penang not becoming failed state, M’sia is http://www.malaysiakini.com/news/385307 DAP veteran Lim Kit Siang today rebutted claims Penang was heading towards becoming a failed state, as stated by BN. In a statement, Lim said: “I do not know whether to laugh or cry when I read this. “Are BN leaders seriously suggesting this? That Penang is worse than Kelantan, Terengganu, Perlis, Kedah, Pahang, Malacca, Negeri Sembilan and Johor?” he asked. Lim said this in response to a recent statement by the BN strategic communications team that Penang was set to be a failed state, due to its increasing debts,… Read more »

“I never realised that I am such a threat to Najib and the Umno-BN coalition that they could threaten DAP’s deregistration and disallow the use of the rocket logo in the 14th general election unless I retire from Malaysian politics.

How valuable were Mrs MO1’s diamonds?
“I will tour the country to seek public feedback whether we should succumb to such intimidation from Umno-BN – whether Guan Eng should resign as Penang chief minister and I retire from Malaysian politics,” Lim said in a statement today.

Amanah Youth: New hotel tax suggests gov’t coffers running dry http://www.malaysiakini.com/news/385270 Parti Amanah Negara (Amanah) Youth believed that the introduction a tourism tax was proof that government funds were depleting. Amanah Youth deputy chief Faiz Fadzil said the tax was nothing but a “desperate” measure by the government to look for additional funds. The public, on the other hand, will be further burdened with the new tax on top of the 10 percent tax on services and the Goods and Services Tax (GST) at six percent. Commenting on the confirmation by Tourism and Culture Minister Nazri Abdul Aziz that the… Read more »

MO1 claimed that our country has strong economic fundamentals.
Why then he remove subsidies and add GST and all kinds of taxes to burden us?
Kids do not need DHA to understand the truth and the lies.

“Tourism Tax/Charge” can or may be implemented as entry payment/ticket sales into parks and gazetted tourist areas. As such places really do and need to hire more crews and provide a better security level. Or take the money to maintain and sustain the environment. Okay, now that might make some sense. In this Mr.Nazri case, it is clearly a Hotel & Lodging Tax. Where anyone who checks into a lodging room will have to pay Rooming Tax per night basis. Problem now is that not everyone checking into a hotel is a tourist. Example- Passenger requiring a room because of… Read more »

Looks like Umno-BN is going to make Mohd Isa Abdul Samad the fall guy in the current Felda-FGV fiasco? Let him take the blame for all FGV losses, and hope to convince Felda settlers to give Umno another chance in GE14? At today’s market value, FGV share prices have loss more than 50% from the IPO price of RM4.45 and that alone should be good reason to remove this non-performing Chairman.But what can Malaysians expect when the fish rots from the head,the body and tail would follow. The FGV members should and must quickly sack the Board and Administrators. There… Read more »

The chairman alledgely has the thrump card of that infamous Port Dickson photo to make MO#1 kow tow to him such that he has become the untouchable of N9.

where is Calvin to give his analysis on FGV? He has nothing to say about federal but pile up to say on penang state?

Why RU so desperate for answers?

In need of cash to sustain TN50 initiatives, probably social blogger to be taxed next for publishing virtual tax? More readers higher the tax rate.

One way to balance the budget.

Somebody cannot “tighten his belt”, “think outside the box” and operate within the budget? GST rate is still flat?

Also, collecting any deposit as security for a future fee is really collecting this fee itself in advance.

To avoid being “pok kai” (bankrupt), Malaysian leaders have to think out of the almost emptied coffer (no thanks to 1MDB Misdeed – the #1 Debtor of all debts combined) to save the nation.
Who else but the Rakyat will have to bear the misdeeds of a few ….
To MACC, “We will see what happens after GE”.

So very satisfied boastingBeEn expenditute is so little but wants to collect this tax on top of GST. This will helpAnb and house investors to open serviced apartments. Hotels will be down workers will be less and less pay but serviced apartment and unlicensed will be more