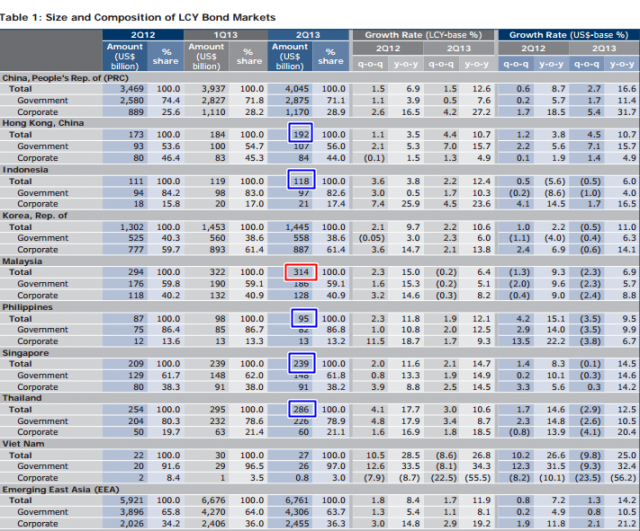 A bond is paper issued by a borrower, whether the government, GLCs or private firms, with a promise to pay periodic interest and to repay the face value upon maturity. The terms of payment depend on how investors view the offer, the risk involved and the country’s economic climate – a view also shaped by rating agencies.

Out of this RM994bn bonds outstanding, the corporate sector accounts for RM406bn or US$128bn. Here are the top 30 outstanding corporate bonds in Malaysia. Note that four out of the top five issuers are state-owned. 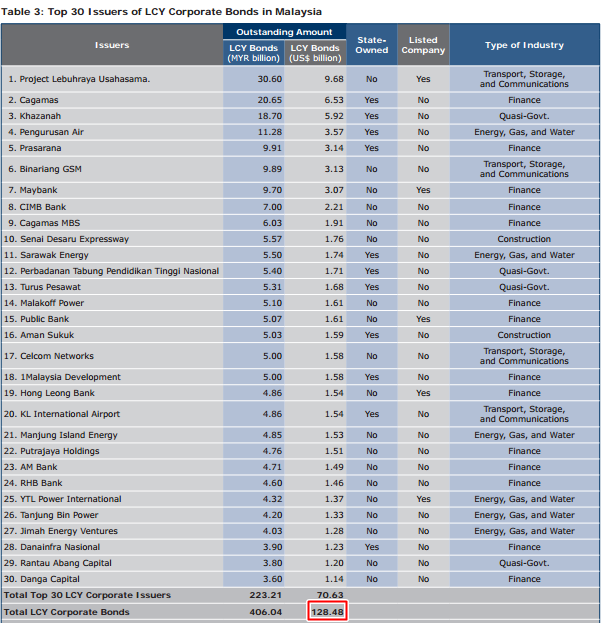 When compared to the size of our economy, our bond market comes up to 105.3 per cent of GDP, still the highest in Asean and higher than Hong Kong’s or even China’s. 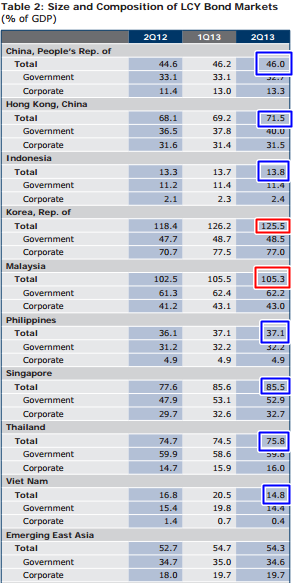 Meanwhile, Malaysia’s central bank has sold RM2.5bn of 30-year bonds, the longest-maturity offering ever but foreign investors have stayed away, the Wall Street Journal has reported. “One concern among investors has been Malaysia’s debt. The country had $145 billion of local-currency government bonds outstanding—one of the highest levels in the region—as of June 30, according to the Asian Development Bank. Indonesia has $89 billion of outstanding government bonds, Thailand has $104 billion and Vietnam has $26 billion.”

BN wanted to introduced financial planning as a subject for school students.
I think it is more appropriate for BN politicians and civil servants to attend such course to stop unnecessary spending and wastage of public fund as uncovered in the AG’s Report.
They should lead by example.

Dear Anil thank you for this article. Could you enlighten us about who is holding all this debt? And what’s the annual yield? Coz if it’s 3%, Malaysia spends 30 billion ringgit on debt servicing. I’m very worried about something I read at KWSP/EPF’s Wikipedia page that states that 75% of all EPF funds are in debt papers. 75% of 569 billion ringgit is 420 billion. Is the EPF being looted to buy and hold all this debt? Another question please. You mentioned that our MGS is rated at A3. What’s the regular yield on an A3 paper in the… Read more »

I agree with you. The borrowing angle is not totally correct.

Dear Sir, Borrowing is good if properly and productively channeled and can be adequately repaid over time. Now if you look at the profile of the borrowers, most of the borrowers are probably politically privatised individuals of Government projects. The question of the borrowings is more an issue of why the privatisation of such a huge number of Government concessions to a few politically connected individuals rather than the issue of the borrowings itself. If the borrowers and their projects are to be further examined, it is clear that the purpose is for infrastructure development to create jobs. But privatisation… Read more »

Thanks for the excellent insights Jim. Appreciate that. Yes, not only is there believed to be inflation of pricing, the need for some of these projects is highly questionable.

Conscientious and responsible use of nation’s monies for the present and future benefit of the populace is the hallmark of a good government and its leaders. The act of spending the nation’s monies for the sake of merely propping up ones popularity or other personal benefits is a blatant act of irresponsibility that betrays the very trust placed upon the leaders by the people. It is also brings the nation towards the slippery slope of bankruptcy. Just look at nations like Greece, Spain, Zimbabwe and more recently the USA. Are we going along the same path?

While all these corruptions and mounting national debts are of grave concern to most Malaysians, there are morons in our midst who regard this national crisis as “biasa la” and don’t give a damn
to whatever happen to this beloved nation of ours. Recently, as if the situation is not bad enough, PERKASA demanded that Najib put aside an allocation of RM1.3 TRILLION for ketuanan Melayu.
If this is not a fish-head-curry brain, then what is?

Those are mostly local debts and see how aNIL manipulate the wording, that is using percentage of GDP when the actual figure is way below when compare with USA, China, etc.

Just google what is ‘bond’. It is very long term debt with low interest rate. And to be fair, just find out the total debt for each country and you will be please that Malaysia is in a very good position/ranking. Countries of interest, let’s check the sovereignty debt for Singapore, China, US, Indonesia and Thailand.

This is a culture of reckless borrowing money to develop a nation, to spend like there’s another tomorrow, to wow with ‘Psy’ comes ‘election’ campaign every 4 yrs, to K-Pop with frothing mouth of no apology (Khairy was right). Corporations are also to be blamed, no thanks to their culture of quickie-borrowing (by getting publicly-listed) instead of frugal management & reinvestment of earnings & profits for the longer run. Why can’t they learn from the late Loh Boon Siew, instead of flashing new Mercs & Volvos of non-productivity every year end to avoid taxes. And with corruption in our midst,… Read more »

We need a Royal Commission of Inquiry for your serious allegation Anil.
rajraman.then we waste more taxpayer money.

Ther are already so many commission of Inquiry and what happen. just a waste of money, time and resources. Must really make an effort for change

Yang,
You tell direct.
rajraman.I tell sinister way.As long UMNO still having the war chest fund … they will have a say by buying the poor people’s votes..

They can always print ringgit and tax us. Wadehel ‘endless possiblities’

Now finally we know that whatever entertainment and star we see prior to the last election are not really free. In fact we the rakyat are paying for it as listed out in the auditor report. The Cheap PM continue to borrow and borrow until finally again the rakyat will have to face the burden. Don`t blame anybody. Blame yourself for being too naive. If the rakyat especailly those rural Malays and Indian that support ARMMO the most still do not wake up, don`t blame anybody but yourself and yourself for believing in the lies of Perkasa and those NGO… Read more »

The implication is, phyllis, there’s no room for error.

Agree with Phyllis… I’m a smart fella but this is Greek to me. How will it affect my wallet and my family?

More money “borrowed” AKA Printed by bank negara. Economy foundation 101, too much money, production unable to catch up : Internal inflation.
It is totally irrelevant with how “strong” the local currency vs US dollar. Because exchange rate volatility it is artificially control by the central bank. FDI are not stupid, they need to leverage the risk of currency.

And don’t expect those illicit outflow fund will “buy back” to support the bond.

So we just borrow, borrow and borrow for the govt to spend, spend and spend? I thought US can do just that because it is the world reserve currency and the pertrodollar system. Is MYR anything close?

Anil should explain the implication or impact of this to ordinary rakyat.
Will it affect borrowing cost or interest rate?
Will it affect the behaviour of BN policy maker?