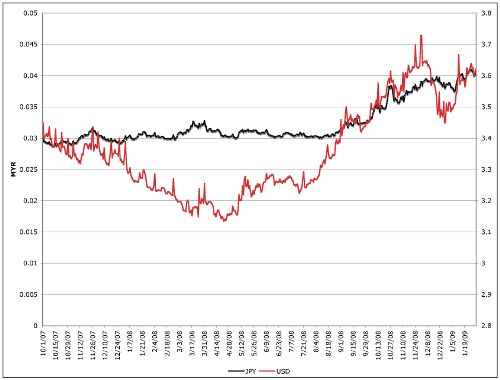 Ringgit weakens against the US dollar and Yen

Buckle up, folks! We are in for some tough times.

Malaysia’s economy took a dive in the fourth quarter as GDP stood on the brink of negative territory, growing by just by 0.1 per cent, compared to 4.7 per cent in the third quarter.

This was largely due to a drop in manufacturing from 1.8 per cent growth in the third quarter to a shrinkage of 8.8 per cent in the fourth quarter, largely because of a contraction of 12.3 per cent in export-oriented industries.

Meanwhile, portfolio investments continued to flee the country. In the fourth quarter, RM25 billion flowed out of the country though that was lower than the RM38 billion that left the country in the previous quarter.

But the Bank Negara governor said we have nothing to worry and insists we will not slide into a recession. She was reported as saying that growth for 2009 would be 5.0 – 5.5% (oh, puh-leeease!).

Hi Anil, As I was telling you this evening, it is REALLY RAEALLY BAD now. I was at the USM EKSPEN 09. Only 11 companies were there having open interviews! This is one Expo to get companies to interview graduating USM students! I have been retrenched 2x in 4 months, 1st by the largest Lab equipment manufacturer in the world, and 2nd by a NanoTech equipment manufacturing co. Orders have dropped by 40-60% in many companies in Penang. SMI factories supporting the MNCs and the larger companies are winding up/closing shop by the dozens if not hundreds. I don’t know… Read more »

It is only a a mtter of time before we will have Zero interest rates in Malaysia and many other countries. Our savings will then be used not for investment in the economy but buy up the debt accumulated by banks. If that does not work then we will go into Quantitative Easing which means that we pump in more money into the economy and hope the for the best. Our leaders must have the courage not only have to make the right decision which includes cutting cost but they will have to put the right people on the job… Read more »

5% to 5.5% growth this year? What more proof do we need that she is economically challenged?

Average Malaysian understands how vulnerable we are economically. But the new finance minister thinks everything is under control. In less than two months he made many contradicting statements pertaining to the economy. I afraid our economy might get worse under his leadership.

Can someone please get the BN Governor to loan her financial management knowhow and expertise to the rest of the world’s central bank governors and the Fed in order to…er…(sorry, to rain on your potential parade Mr Brown) save the world from the financial meltdown!

dear anil
Again you got the graphs upside down. Our leaders (PM,DPM, FM II, BNM) have assured the rakyat our economy is resilient. If at all only a “ripple” effect. Please check your source of the graphs again.

DSAI and his PR counterparts have warned that Bolehland’s economy will be in deep trouble many months ago in 2008.But the Bee-End is forever in a state of denial. May be the Bee-End has a good source of income from: 1. Saving billions daily from the Petrol subidies because the price of petroleum came crashing down (however Petronas will be badly hit). 2. Collecting RM0.40 from every litre of petrol bought by the Rakyat, it’s tons of monies, anyway. But how are they going to use this money? (buying all the toll highways and IPPs to benefit the Rakyat? No… Read more »

We knew what was coming some time back and the rest of the world also saw the “shut” coming. Unfortunately our Beloved DPM soon to Be PM (God Forbid) still thinks he can … the people by his ever positive view – until now that is. But do you expect him to say “I was Wrong”. Say more and he will come back with his warning that he will take action against us all for challenging his statement. Aiyah , might as well stay diam diam. Wait for next elections lor. Too late no doubt but sill can kick the… Read more »

The figure of 0.1% looks too fake to me. I believe they are afraid to show a negative figure, and thus declared the lowest possible figure short of the even more unbelievable zero.

You know what. Our friend must have the charts upside down. That is why he is so upbeat.

The economy is fine. Only other unstable countries are facing recession….we are still going strong….NOT!

only in malaysia they say its okay!

End of the day, only Anwar was right when he argued about the budget Badahwi tabled. They are in denial,ignorant and arrogant. Want to speak like they are smart.Everything is ok….that’s the sleepyhead’s favourite words.

Bank Negara’s governor is a … that obediently says what the political maniacs want her to say. … But that’s obvious enough.

In Australia Parliament the govt and the opposition are debating fiercely on the second stimulus package. After the first stimulus plan was implemented, there was no promising signs of things are improving… mass retrenchment is a daily occurance. Thousands have lost their jobs and many more to come. I wonder why Malaysia is so confident that it won’t happen in this ‘lucky country’??? Do we even have the talents in BN govt to tackle this Huge Global Financial problems?! As we witnesses recent events unfolded in Bohonland, Politics is more important than Bread and Butter. We may wake one fine… Read more »

Oh we are so strong!
The economy fundamentals good
We don’t have to worry
Our reserves can last the pace

When the world facing the crisis
Bee Anne leaders still partying
Rewarding cronies forgetting about economy
Now the crushing time
What lies ahead?

Are you sure about this Anil? We are still being told everything is fine and stock market boleh tahan. Infact, we are even told that Malaysian economy is so resilient that it can weather this storm.

Najib will say, “No problem, my …. still intact”