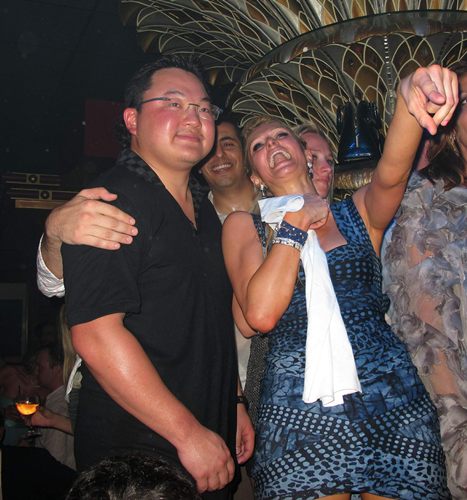 Check out a couple of pictures from the BZ Berlin website here. And have a peek at the party pictures on the Celebutopia website forum here.

The party to top most other parties has made it to the British press as well – in the Daily Telegraph of all places.

Look at those massive champagne bottles. A lot of champagne flowing there – wonder who paid for it. According to a Telegraph source, there’s another wealthy dude in tow as well: Zhen Low, who together with another billionaire, reportedly picked up a 2 million-euro booze tab. Some party, eh? (Jho Low, in a Star interview on 29 July, subsequently denied that he or his brother had paid for the drinks.)

Now, where did these dudes get all that money from?

What recession? Tycoons spend £1.8 million on champagne in St Tropez
Paris Hilton watched as the rival tycoons Zhen Low and Winston Fisher competed to see who could order more £600 bottles of Cristal in a St Tropez nightclub.

As Joan Collins and her friends descend on St Tropez this week for a party on board Lady Joy, the yacht owned by the American socialite Denise Rich, they have been made to look positively austere.

Mandrake hears that two rival billionaires spent a staggering €2 million (£1.77 million) on champagne at Les Caves du Roy nightclub. Zhen Low, the younger brother of the Malaysian tycoon Jho Low, became involved in a competition with Winston Fisher, a New York property developer, to see who could order more £600 bottles of Cristal for their chums.

“Even by the standards of Les Caves, this was something else,” says my man on the Côte d’Azur.

Meanwhile, the Star reports that Jho Low’s father has asked him to er… lie low (pardon the unintended pun!) for a while in view of all this unwanted publicity.

22 July 2016, at the end of the day Jho Low is just another low life thieving crook.

he’s such a money waster…makes malaysia so shameful…

Paris’ Wisdom-
“Every woman should have four pets in her life. A mink in her closet, a jaguar in her garage, a tiger in her bed, and a jackass who pays for everything.”

no one to blame lah, whats wrong with him? he only enjoy his life time with the money he earn with his bare hand, if he really promote malaysia as what he had said dont u think it will bring benefit to this country. hope he really do it loh.

… I am not sure if this guy is born in Penang. I dont really care. He will be better honoured if he has given his money for a good cause than to soak it up in booze and women. Yucks.. Paris Hilton????? Birds of the same feather flock together.

aiyah he look like sudah mabuk la. He is so cute he reminds me of a ‘roast …’. I recommend he join Pakatan Rakyat and fight for Pasir Mas parliament sit and fight against Perkasa’s Ibrahim Ali who also looks like a burnt roast …! heh heh heh heh .
Anil, drank too much teh tarik today. All Gobind’s fault lah.

Jho Low can join BN and teach BN how to:
1) Close the gap of deficit
2) Improve FDI inflow
3) have Paris Hilton promoting home=stay like A Simple Life
4) Teach malaysians how to be rich at young age
5) revamp the curriculum of primary/secondary school.

i dont care he party with paris.

he fat and i am sick of all his cover story like he is donald trump or something.

yeah, well….he answered the allegations. Let’s give him the benefit of a doubt. It’s not like we have any evidence of wrong doing on him. Just leave him alone and let him spend what he wants. However, should it come out in future on any wrongdoings on his part; i certainty don’t think its just people on the internet that will be calling for (action). Let’s concentrate on what we have right now.

He ran a company that he setup during his university days with some others friends and the company is worth more than USD 1 billion in New York…so you guys still want to scold him ? His own effort la…

It’s a waste of time to party all night. He should help the needy instead. I believe there’s other ways to socialise.

If i am just rich as Jho….i’ll partying with Lindsay Lohan hahahaha….But i think it was a mistake have something to do with Paris Hilton….We might see another “One Night in Paris” soon….

After the report in The Star, there are many Malaysian sour grapes everywhere. Malaysians should get out of the tempurong and dare to go out to the outside world, it’s huge there !

The parents never give a good education to their son even they are rich !!!how to use the money in correct way !!!

Did he pay enough tax in Malaysia or USA?

All of you know federal hotel and low yat plaza , right?
That is the hint.

Consider it a publicity stunt for which the value of the media coverage outweigh the price spent that night.

lol to all idiot

Hahaha, in a way it’s a very good advertisement for Malaysia and Penang ! Hei, no need to pay any middleman canvassing fee now !

Malaysia Boleh! (means Malaysia Can). It is Malaysia slogan.

Malaysia really can, it proves Malaysian billionaire are able to spend money. Money is not yours until you spend it! Boleh!

respect! yall never ever will party with paris hilton in yo life time! i wanna be a billionair so freakin baaad