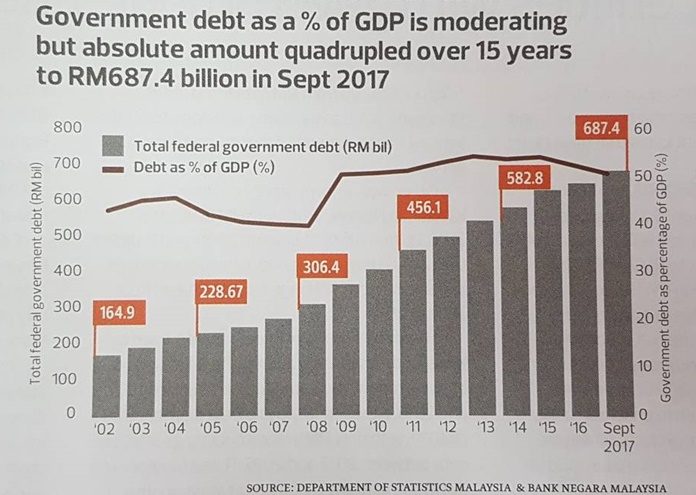 Here are five reasons why we should be concerned about the Malaysian government’s debt and expenditure levels.

Take a look at the rising government debt level and the projections into the future.

So far, the government has been careful to keep the debt level below 55% of GDP, but this figure does not capture the full picture, as we shall see below.

Live for today, too much burden to think of tomorrow, this factor drives consumerism in modern capitalist world hopefully PSM can address in its GE14 mAnifesto.

Minimalism is about saying goodbye to excessive consumption, but not to consumption per se. It is more about living (well) within your means, rather than trying to keep up with the Joneses by working crazy hours because you need that promotion to support your already inflated lifestyle. To practice minimalism, ask yourself these two questions: “Do I really, really need that?” and “Could I live without that”? First, ask these questions whenever you are about to buy something. Once you notice you’re buying less, ask yourself the same questions about all the stuff you have already collected over the years.… Read more »

Only a Thief will: Craft web of stories of super-generous donations from foreigners to justify his loots. Sow hatred within the multi-racial communities to create distractions from his crimes already know to communities. Create fear & hate of a ‘bogie man’ in the minds of the armed forces & police. Deny everything in spite of mounting evidences. Shut the glaring whistles of blowers with fake news law. Misuse avenues of questionable justice to clear his tainted name. Most probably want to steal some more to feed his addictions. The next time you come across a #1 Brand of questionable repute… Read more »

Let’s hope voters can think like you and reject Umno-BN. Cheers.

Past one week najib is dispensing goodies to civil servants police, army, fisherman… where did he get the money if we sre in hugh debt? Supplementary budget is a resl mockery to Bajet 2018.

From you and i. Wants to listen to ah soon, calvin, engineer? Only way to stop is to have new gomen. They give peanuts, but they eat kfc.

Take the BN goodies but vote for Harapan.
Please give Harapan a chance, you can see Penang and Selangor have been well governed the ladt 10 years.

PM Najib said Malaysia’s debt-to-gross domestic product (GDP) ratio is relatively lower than some developed countries, at 50.8%. Najib said the country’s relatively lower debt-to-GDP ratio was proof that the government practised prudence and accountability in managing its debt. “The allegation that our country is in massive debt is unfounded and untrue.” Idris Jala praised the government for doing the right thing by “taking the road less travelled”. “We (the Cabinet) found that 90% of all advanced countries achieved high-income status by borrowing money. Only 10% took the road less travelled and we are one of those countries, thanks to… Read more »

Statistics look good but we do not feel it.
Cost of living has gone up so much.
Our purchasing power is so low.
Bank Negara has admited our wages too low, possibly suppressed by cheap foreign labour.
GST rate might go up once BN is reelected.
Sigh!
Harapan is our hope.

Why does Hong Kong government have so much cash?
Read more at https://www.thestar.com.my/business/business-news/2018/03/25/why-does-hong-kong-government-have-so-much-cash/#dBlg6bkSyiSWVtta.99

Hong Kong’s foreign currency reserves held US$361 billion as of 2016.
Bank Negara Malaysia’s international reserves held US$103.6bil as at Jan 15, 2018.
The contrast in land size, resources & financial wizardry between these 2 countries can be compared to a Sang Kancil vs a Kerbau!

Recently, hk gomen announce they are helping low income earners with rm2k. Oredi, seniors aged 70 are given rm1k fruit allowance EVERY month. Even li ka sing richest man is entitled because every 70 years old resident is entitled. They have social security and social worker to handle the case. Seniors only pay rm1 for every trip irrespective of distance. Here, bn tell us to be grateful when they give leftovers. Malaysia is a rich resource country. Yet we have do many ministers in pm sector. What are they doing like low paul n wee. Aca investigate phee and tunnel.… Read more »

Vote for the wrong politicians, hawkers may have to add GST, which may cause many hawkers & ori-maestros to close stalls (chap-lap).

Poor man’s Bee Hood Mee to cost more than Rm1.50 per packet?
Time to switch to Roti Canai Kosong which costs Rm1.00 (though not so healthy).

Facebook has been collecting call records and SMS data from Android devices for years. Several Twitter users have reported finding months or years of call history data in their downloadable Facebook data file. A number of Facebook users have been spooked by the recent Cambridge Analytica privacy scandal, prompting them to download all the data that Facebook stores on their account. The results have been alarming for some.

Take a look at the scale of the scam (democacy for sale):
http://www.informationclearinghouse.info/49060.htm

Nothing can beat the MO1 Scam!

This father of all worldwide scams even supersedes money games, which are liable for prosecution! Still no case, w.t.h.!

Knocking on Heaven’s Door and seek the courage to vote for change in PRU14.

Putrajaya’s “Jualan Sentuhan Rakyat” is proof that the cost of living is high due to the Goods and Services Tax (GST), Penang Chief Minister Lim Guan Eng insisted.

Lim claimed the federal government’s sale campaign was to detract from the high prices of goods due to the 6% consumption tax.

“By organising this campaign, it only means they are admitting that the prices of things are too high now,” he said.

Hey, politician. Give our Royal Malay Regiment the highest respect. They are the fearless regiment respected worldwide. And one of the best armed forces we have since Merdeka to protect us while we go about our business.
To treat our RMR like kids with bogeyman fear is totally disrespectful of these army men who fear nothing but God.

Bands performances of the Malay Regiment at Buckingham Palace, London

Yoursay: Disband Malay Regiment? Fake news from the PM
https://www.malaysiakini.com/news/417989
‘His allegation Malay Regiment would be dismantled is not only false but a blatant lie.’

Ah soon, calvin and engineer. Dedak and fake to say Mal.Regiment can be disband. Ruler of a state is the commading officer.

What are the living wages for Penang?
Readers please offer opinions based on your experience.

As long as there is no COLA, salary increments are superficial, unions are hobbled and profiteering reigns, the outlook is bleak. We constantly hear rosy news of certain social programs. How accessible are these? What happens when a major illness or old age strikes?

It all depends on how much you are keeping aside for retirement. Somehow people only spend to enjoy today, but no savings for rainy days. Things could get worst if GST is raised beyond the current 6% should BN gets 2/3 majority after PRU14 the way Mr MO1 is throwing money in his cash is king strategy to buy votes.

A new concern for Starbuck fans:

Starbucks must put a cancer warning on coffee sold in California, a Los Angeles judge has ruled, as California law requiring companies to warn consumers of chemicals in their products that could cause cancer.

One of those chemicals is acrylamide, a byproduct of roasting coffee beans that is present in high levels in brewed coffee.

Heating carbohydrates produces acrylamide. The famous example is potato chips. Anything gone brown (e.g. crusts) is also suspect. Ditto for over-heating fats and proteins. Moreover, food processing utilises literally tens of thousands of untested, unregulated and undeclared (or obfuscated) chemicals. This is in line with capitalism, the leading, global religion.

“Corporate consumerism requires that we suffer psychological, physical and environmental disease, and if necessary die, for profit.” – David Edwards, 1996

Coffee, cancer, and other improbable ways coffee might harm you!

How much debt is Putrajaya owing to China to date? And how much of future debts is China willing to accommodate for more debts? Is our debt to foreign countries tied to USD? More debts = at the mercy of creditors (learn from Ah Long’s merciless morphing T&C). Future Scenario: 1) Debts to finance expensive development projects = leverage of foreign control of local profits via tolls & rentals of business space. 2) Debts with a depreciating Ringgit = paying more to service higher interest quantum & to reducing appreciated premium loan. 3) Indebtedness = kowtow to foreign creditor’s political… Read more »

Many China mega projects in Melaka Gateway and Johor Danga Bay+Forest City, and not sure how much impact on Malaysia reserves. But for sure if China makes its presence felt in Penang, it is very likely to become very sensitive matter for BeEnd.

To avoid so-called annihilation by DAP, MCA can bigwigs can move to contest in safer malay-majority areas, if its master Umno is agreeable to seat swapping.

Redelineation according to racial composition will mean MCA and MIC can no longer depend on Malay votes to win.

There are no federal plans for pg. How many houses central has built? Central has mrt and flood mitigation for kl. Pg chak kai ki