Update: According to Forbes, Mokhzani was the 15th richest Malaysian as of February 2013, with a net worth of US$980m (RM3.2bn). “Mahathir Mokhzani reaped 43% gain in wealth after his Kencana Petroleum merged with Shahril and Shahriman Shamsuddin’s (No. 12) SapuraCrest. Serves as executive vice chairman of what is now Malaysia’s largest oil and gas service provider, SapuraKencana. Father is former prime minister Mahathir Mohamad.”

SapuraKencana Petroleum Bhd, whose executive vice-chairman and part owner is Mokhzani Mahathir, has reportedly entered into a partnershp with Vestigo Petroleum Sdn Bhd, a subsidiary of Petronas, to bid for a second risk service contract to extract oil from a marginal oil field.

The Edge cited sources as saying that SapuraKencana has signed a heads of agreement with Vestigo to bid for the Bubu marginal oil field off the Terengganu coast.

So far, four RSCs have been awarded:

A total of 25 lucrative contracts could be awarded in coming years.

Just weeks before the 5 May general election, Anwar Ibrahim had vowed to revoke the RSC contract awarded to Mokhzani’s SapuraKencana.

Risk service contracts are a profitable business as the internal rate of return is around 16 per cent.

Mokhzani, son of Petronas adviser Mahathir Mohamad, has a 13.2 per cent stake in SapuraKencana. He was previously the major shareholder of Tongkah Holdings but disposed of his interests in 2001. Tongkah Medivest was one of three firms awarded government concessions for support services at government hospitals and medical institutions.

Shahril Shamsuddin is the other major shareholder of SapuraKencana. Shahril’s father Shamsuddin Abdul Kadir, a close Mahathir associate, had moved the Sapura group from telecommunications to oil and gas. 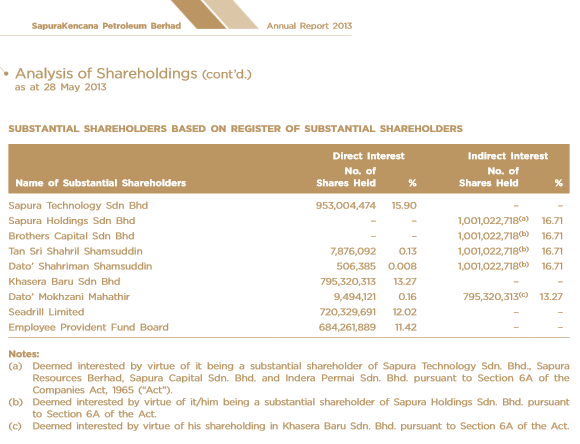 mahatir children are extraordinary species.
who pay for tongkah mess?

Yes just like Waytha pretending to fast just like the great pretender.
Wowo finally got a deputy minister job
Wowo he thought he can talk hahahah Zhaid, Hishem, Khoiry and many UMOO said shut up.
Yes like an obedient boy he is really shut up now and continue to get his titbits and salary

Yang,
That’s how Organised Politician works.
rajraman.When zaid and Hisham open mouth they talk rubbish,but Najib said toe the line Whaytha toe the line and take the salary.He should resign to em·bar·rass the red lips but Indian Politician are common in one thing including Pakatan.CHAMPION OF DEAD INDIANs AND TEMPLES.

Andy many will suffer just like Tongkah many many years ago that go PN17 and was busted and delisted.

Thanks Andrew I
rajraman. I don’t know there’s a crown but i just want to play a game.Please join me.Lets play the mind game with UMNO warlords.

Andrew I
Reply to  rajraman666

It’s the crown for pickling Gherkin.:-)

rajraman666
Reply to  Andrew I

Well i pick Gerakan K because once upon a time Gerakan KSK told openly there is no calibre Indian candidate from Gerakan to represent Gerakan as Political candidate for election.
rajraman.I turn the table, Pakatan Indian Politician is represent Indian dead bodies and temple issue.Economic wise they are dead silent.The other races in Pakatan openly ask for economy pie and through back door.

If anyone say i am racist so it’s be.

Sure jealous lah.
rajraman.Everything the UMNO Dynasty take all.What’s left not even bones.They rape our natural resources and don’t leave for the generation.Even Timur Leste have oil money more than 10 billion currently as saving from oil money for their citizen like Norway.

Andrew I
Reply to  rajraman666

Hahahaha…batuk,batuk. I hand you my crown, raj. You do it so much better than I do.

Not jealousy, Its cronyism. Capable people don`t just rely on govt contracts and thats what his son and many UMNO guys are doing. Yes you are also the same and one always waiting for govt titbit, handouts and projects. Since when have YOU yes YOU and the Malays and UMNO cronyism stop using CRUTCHES.

A … is always a …, regardless of what and how the … calls himself especially when your father is egregious Mahathir ? Can a … breed a …?

This is how elite umnoputera made money (who cares about BR1M?) by dabbling in the stock market via contra transaction (with insider’s information?).

One way for entrepreneur brother to help … political brother career … ?