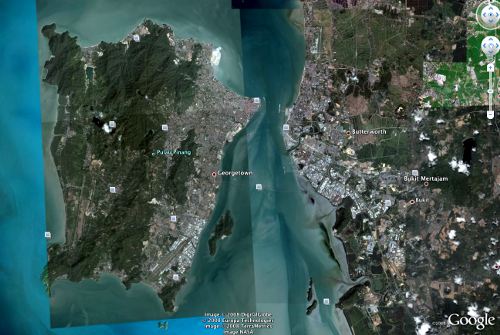 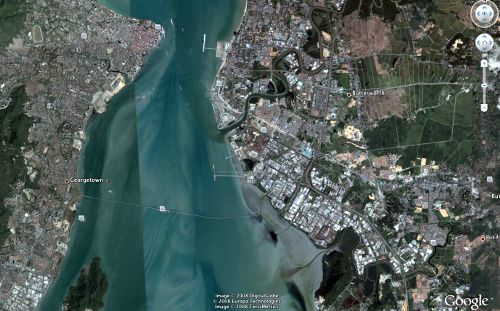 Ever been in a plane and looked down carefully at the sea around Penang?

These satellite images paint a thousand words. Look at the mess around the island and mainland. And take a careful look at the colour of the rivers leading to the sea. Black. Siltation and pollution. Ugh!

Now, would you really want to swim in these waters? You can see the contrast between the murky waters around Penang and the deep bluish green hues of the Andaman Sea farther north leading up to the breathtaking islands of south Thailand.

Is this the price we have to pay for industrialisation and ‘progress’? Is this an acceptable price, do you think? Who is to blame for this? Industry (untreated discharges that flow into the sea)? Property developers (hill-cutting that leads to siltation and sedimentation)? Lack of effective sewage and effluent treatment plants? Government (for its ‘pro-business policies’ that fail to take into consideration compliance with tight enivironmental regulations and standards)? Or all of the above?

It wasn’t always like this. The older generation will remember how crowds used to enjoy swimming off the coast of Batu Feringgi and Tanjung Bunga (until the 1970s) and even on the beaches of Butterworth and Telok Air Tawar (until the 1960s).

Now, there is so much talk about promoting tourism. You can read the funny brochures talking about the five-star beach hotels, white sandy beaches – but the brochures don’t mention the polluted sea and the jellyfish which thrives in it.

It is possible to clean up the rivers of Penang and the sea around it – if we have the political will to come down hard on pollution and siltation. (Singapore has cleaned up its rivers.)

What is the Department of the Environment and the government doing about this?

I am sorry to say that nothing will happen.I have send letters for the past 3 years to the current goverment and the previous goverment about the polution of the small lagoon at the floating mosque.The polution just carries on without anybody batting a eye.On top of that you have a few hotels near the floating mosque and i wonder if those tourist really know that they are taking their health into their own hands by swimming in the sea.

Its about having that political will and determination to get things done. Singapore has done it well because they have planned it well from the beginning. Include punitve fines to people who pollute the environment and surrounding. During the 90s, they even have Corrective Work Orders on pepetrators with camera filming them all time Hmm……..Good source of revenue for state coffers. You think LGE and its state government plus penangites willing to accept such solution. Heavy Fines. Vigorous cleanup with extra charges funded from Penangites and others in Penang. Can penangites accept this? It does not come cheap. And it’s… Read more »

Coal power plant in Manjung perak is flushing million tons of sulphate, nitrate, chlorine oxide residue, and other toxic waste into the sea for the last 5 yeras. all these wastes can have damaging effect on the sea and environment. best you do a story on the waste discharge from Manjukg coal power plant. billion ton of sea water is use and sent back polluted. this plant have another 20 to 25 years to go. Think what can further happen to sea then.

The polution of seawater and river in Penang state is the fault of the government department which did not plan, manage and enforce at the utmost of their abilities from the begining of the industial era. In Juru light industry estate,how many plating plant which operate in small scale have a waste water treatment plant? No wonder Sg.Juru is the top in South East Asia of polluted river,the recovering works untill today have not yet have any positive sign. Sg.Prai,decade ago is the dirtiest rivr in M’sia,millions of ringgit have put in to recover it,till today when tide is high,a… Read more »

we must first change the mindset of people. most are ignorant of their actions and of cos, the very weak scrutiny from the authorities had worsen the problem.

i’m sure such problem did not happen overnight. it is the result of the accumulation of waste all these years.

hopefully something is done real soon. if not, i dare not imagine the condition 20 years from now.

Thanks for highlighting the plight of Penang’s seas. I guess you were probably asking a rhetorical question ” Now, would you really want to swim in these waters?” Not me, and I told that to my Penang friends more than twenty-five years ago! Anyone who knows Penang will tell you it is such a beatuful island with an alluring and rare charm that even beguilded Somerset Maugham the novelist, who spent time there. But take a drive along its unique sinuous coast road around the island and you will see how the poor island has suffered a tortuous existence since… Read more »

I am surprised that you have only just noticed….

continuous rain in penang will destroy penang a lot surely la … lets do something..

reached home around 3.30 am .. rain kinda stopped in town when i dropped my friends home .. but in greenlane it was still very heavy .. access to houses also flooded …

Can we start with ourselves first? We are treating our small longkangs and rivers like rubbish bins. We throw rubbish into the river. Just look at Sg Gombak rubbish trap. Also how about hawkers and markets – can we have bigger bins to contain them and any grease should be properly disposed. Of course factories and and constriction can be mornitored and the culprits be hauled to the court and fine them. This also include the air quality that is emitted by factories and the SMART Tunnel. Did SMART Tunnel produce the air quality and emssion report due to heavy… Read more »

I personally went out with a few friends at 2AM last nite to see the floods and it was scary guys. I didnt take pictures as i left my camera at home. Was rushing though but had my handphone to take pics. Yes, i must buy a better camera soon as my current one not so good plus it was at nite , no lights, my housing area and a few others areas blackout, my car swam tru floods and already many times my Perodua Myvi swam tru floods and its ok , touchwood, saw a couple of mercedes rosak,… Read more »

Hi, Even in the early 80s we could still find nice sandy beaches; for me, the srtongest signal that something was going wrong came when fishing trips yielded worse catches. During the 80s, you could still get quality table fish even when fishing from the shore. Cast netting for shrimps in the late afternoon was a favourite pastime; it also yielded fresh and tasty fare for the table at dinner. The surrounding waters also had quality table fish like groupers, threadfin salmon (senangin), sembilang, and jenahak from time to time on live shrimp bait. Even trash fish (as it was… Read more »

Perhaps we could form a group to clean up together the environment. Why wait for others?

Came across this article /a> here. Though is not mainly about environment but gomen should concentrate in this and not big projects only. Federal gomen too.

Busy engaging in communal politics to give an iota of care towards the environment, Anil. I just drove up home to Batu Ferringhi from Georgetown, workers are still working to clean up the land slides and there are three temporary road blocks to control the flow of traffic both ways along the narrow sea-front road. I wish I can have both the ex-CM Koh Tsu Khoon and present CM Lim Guan Eng to give both a piece of my mind. More and more hill slop developments along the coast with 50-60 storey high condominiums located on steep hill slopes. Trees… Read more »

Anil, Dont think your use of google earth to prove your point is entirely accurate. The composite satelite pictures were taken with different lighting of the sun some parts very bright and some parts dark. I have seen pictures where one part of the river is coloured black the next square you move it is white. As far as i remember, 1977 I always see jelly fish in the Penang waters. I am not disputing there is polution in Penang and environment degradtion but the evidence provided by you is more for dramtatic effect than concete proof. Dear Jun Yeen,… Read more »

Anil – I also would like to know what the Jabatan Pengairan dan Saluran doing because last night, my area here near the Race Course was flooded. This is the worst flood I have experienced since I moved here 7 years ago. The water was as high as half a Kancil. Since August 25th 2008, we had experienced three floods and two motorbikes and a Naza Ria belonging to me have been damaged. I wonder if the Jabatan Pengairan has done anything since Aug 25th ‘cos the flood worsen eventhough the rain is not that heavy. Makes me wonder if… Read more »

Who to blame? What an easy question BN in general and Gerakan in particular for the 40 years of neglect, it will take another 100 to clean this mess up. Note to DAP: Lots of work ahead, we know miracles wont happen but affirmative action is what the people of Penang want to see. On another note, check out this Eurocopter Cougar deal that Brazil made in June 2008 for USD1.2 billion, we are paying USD600 million for a lousy 12 copters, something smells very bad here, rotten and possibly high commission deals. http://www.defenseindustrydaily.com/Brazil-Signs-1B-Production-Deal-for-Cougar-Helicopters-04959/ June 30/08: Brazil and France sign… Read more »