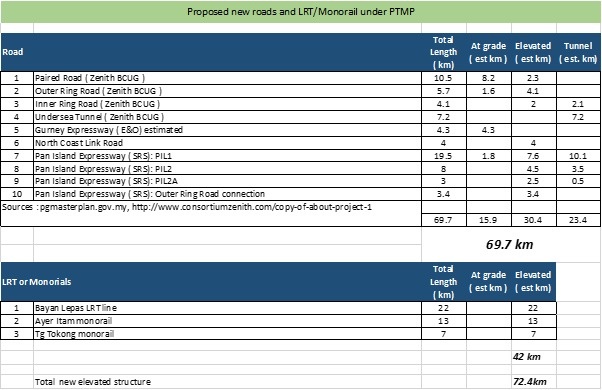 At a time when visionary and progressive nations are turning towards more sustainable forms of mobility, Penang appears stuck in a 1950s to 1970s time warp as the state plans more and more highways for this small Penang Island.

Check out the table above. As someone noted on social media:

Penang Island stretches from north to south only 23km and 17km from east to west and round Penang Island is only 72km. But we are going to have a total of 70km of new highways and 72.4km of elevated structures on this island!

And check out (below) how the proposed six-lane Pan Island Link (red) will run parallel to existing multi-lane roads (blue).

By the way, the first phase of the PIL highway (PIL1) will cost over RM8bn and the second phase (PIL2) will come up to RM4bn, making a staggering total of RM12bn.

So what happens when the PIL gets congested? Build a PIL3 at the summit of the hills of Penang?

By the way, do you really think property prices will rise next to a highway like this below? 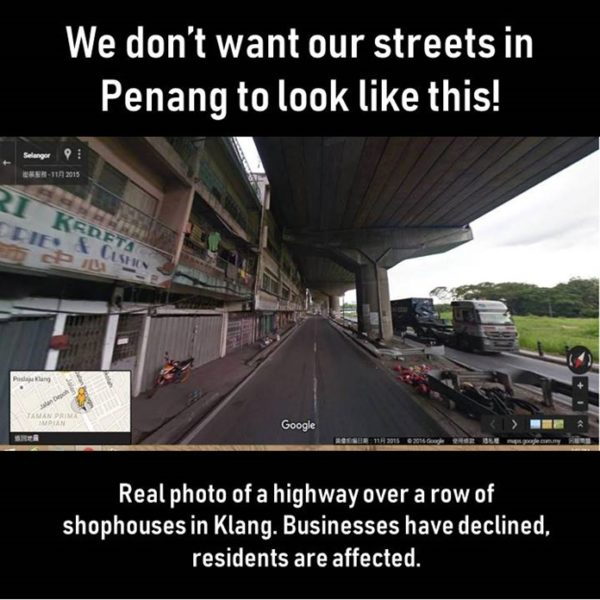 Will business really improve for shops in the shadow of such a highway, with all the noise and pollution? Think about it.

Finally, it looks as if those pushing for all these highways have not yet received the memo on cars and climate change. A 2010 Nasa study found that motor vehicles are the greatest contributor to global warming. No wonder an article just published in New Republic has said that if we want to solve climate change, “The modern automobile must die”. According to the article, even electric cars won’t help unless the electricity comes from renewable energy. If the electricity used to charge the electric car was to come from a coal-fired plant, the emissions would be more than those coming from a petrol-powered car.

Remember the Pakatan manifesto’s pledge to cut carbon emissions by 40% by 2020? So how?

If Penang’s prominent civil society groups and environmentalists are to be believed, the majority of the island’s residents are strongly opposed to the proposed Pan Island Link 1 (PIL1) highway project.

However, the many locals who find themselves stuck in traffic on a daily basis are welcoming news of the RM7.5 billion proposed highway.

Penang Forum must reach out to more Penang folks as you cannot count on them attending your forums in George Town.

This is the top issue in Penang right now.

Sumisha Naidu of Channel News Asia (if you are reading this) please come to Penang to do an exclusive reporting and interview Mr Anil to publicize this hot topic.

Sumisha is a Malaysian working for Singapore CNA?

Sumisha Naidj can still make it to the forum by Penang Forum. Or Melissa Goh can come instead? Penang Forum should invite these prominent tv personalities, can help in marketing your message. Or can get Majalah 3 folks from TV3?