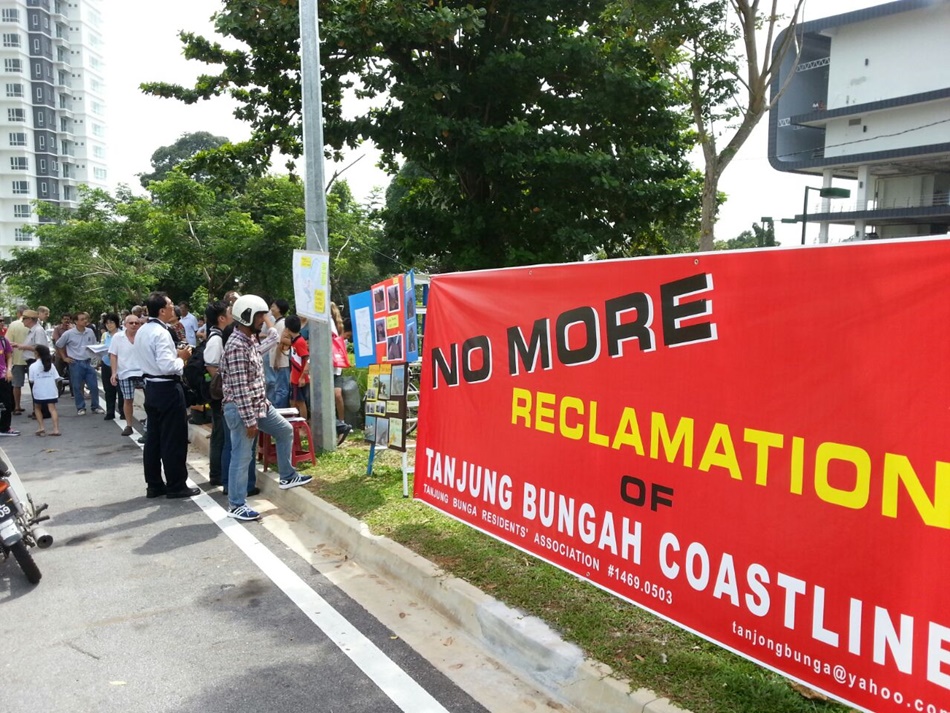 Remember the Jelutong dump site? At one time, there were plans to create an urban park for the people. But now, PDC is requesting for proposals to redevelop the site, presumably for mixed development.

Similarly, over in Tanjung Bungah, the state government announced in 2010 the soft launch of a coastal park at the site now popularly known as the Sore Thumb, because it juts out into the sea following some (illegal?) development and reclamation work. 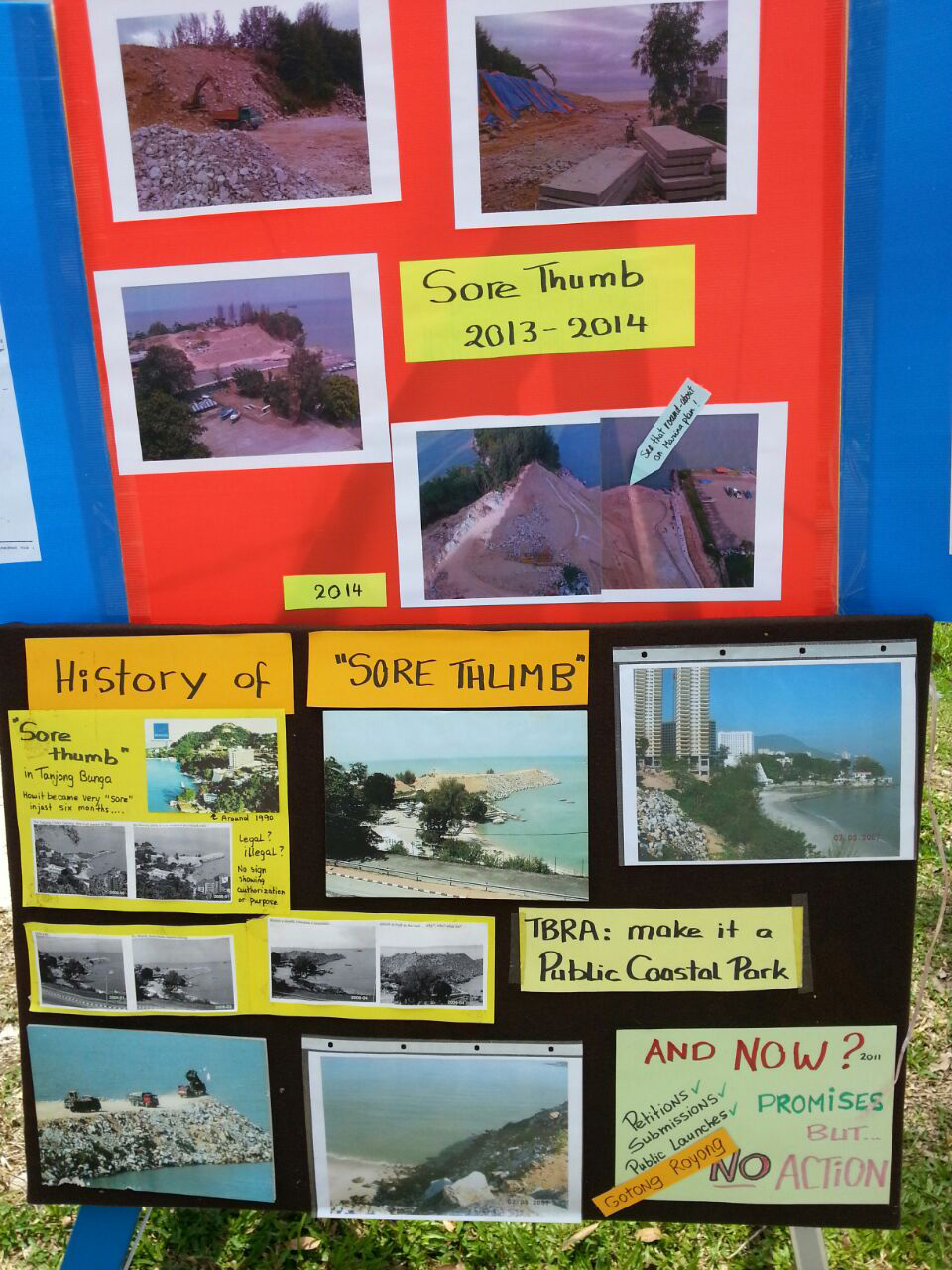 But now there are bigger plans – which sound strangely familar because they seem like old, resurrected plans. PDC plans to develop a “marina and supporting coastal and marine tourism facilities” on state land and the adjoining sea area (great, more land reclamation for the well heeled!) in an area measuring 5km by 5km.

The marina development and operations “will be offered on a lease for a 30-year period with a renewal at the discretion of PDC for a further two terms of a 30-year period each”. The reclaimed land will cover up to 20 acres of the project area and it will be regarded as 99-year leasehold land. The deadline for the request for proposals is tomorrow.

PDC envisages that at least 20 per cent of the berths in the marina, which is meant for pleasure crafts, must be able to cater to super yachts. (We can see where the priorities lie. What about 30 per cent of the area for low-cost and low-medium cost housing? No, the PDC is not allowing any residential development here.)

What about the Sore Thumb? Was this reclamation legal? 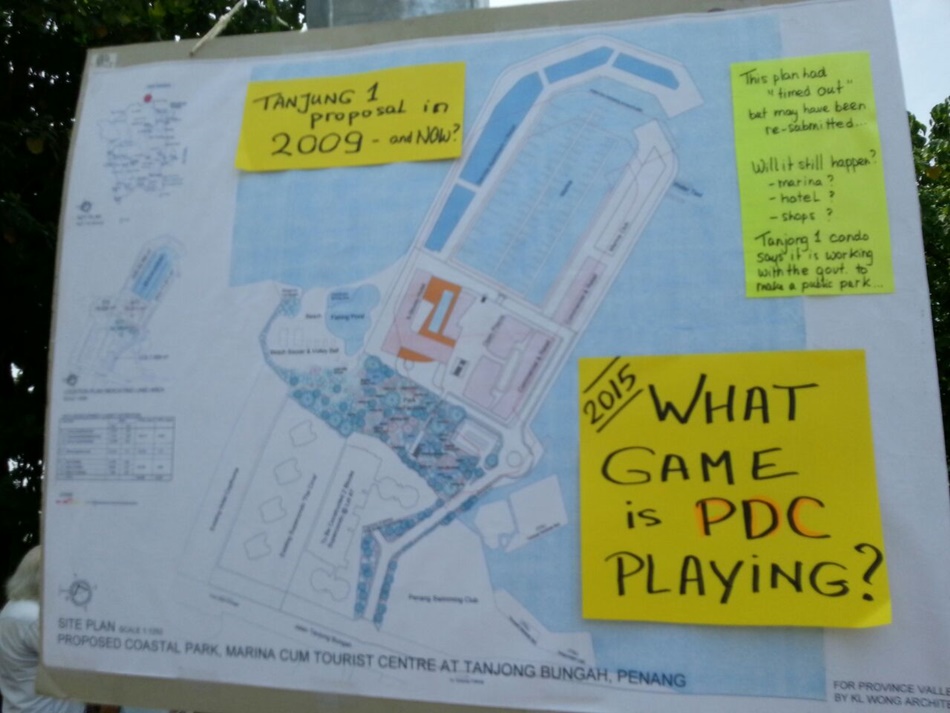 Now it looks as it looks as if the Sore Thumb and the proposed public coastal park will be part of the selected developer’s scheme. (This explains the public road between the Penang Swimming Club and 1-Tanjung.)

What will be the impact of the reclamation on the Penang Swimming Club?

And what is the role of the 1-Tanjung development in all this?

Isn’t this PDC invitation for proposals similar to what was originally intended by certain parties when they first came up with plans for the area including reclamation about half a dozen years ago?

Who was responsible for the dumping of rocks and earth – without the permission of the MPPP, which issued a number of stop work orders? 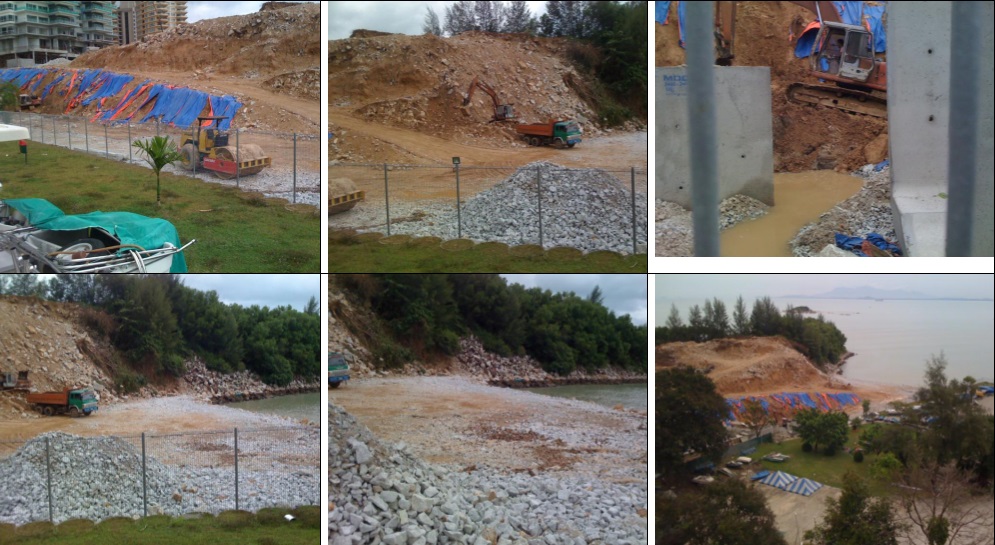 But of course work continued after short pauses. Why didn’t the MPPP ask the party responsible for the dumping to take back all the rocks and earth and restore the beach to its original condition?

TBRA tried to make the best of a bad situation by asking for the Sore Thumb to be turned into a coastal public park. And a soft launch was even held, complete with a layout plan for the park.

It looks as if this latest move by the PDC has the effect of giving a veneer of legitimacy to veiled plans made a long time ago.

We like to sing praises for our success. We say many things. Some true while others have to be passed by the lie detector test. But before we sing any more could one person from Penang be sent to the Ocean And Port City of Plymouth United Kingdom on a study tour with the purpose of finding out how clean that city is with the view to making an unbiased report and to draw up plans to clean Penang.

I felt encouraged when the state government restricted the usage of plastic bags and banned the usage of polystyrene. But now the people start to realise that it is actually a camouflaged monster that is destroying the beautiful island of Penang

Dedicate this “Earth Song” sung during The Voice USA this week to YB LGE & YB Teng with the message : What on earth is happening to the landscape & geography of Penang Island ???????

Gerakan Teng focuses on Parking Coupon discount matter and not working to resolve the woes of concrete development like land reclaimation matter or botak hill concerns ? How pathetic the strategic thinking hats of Gerakan Penang !

I am sure Teh can anytime be a better CM of Penang than any of the sleeping Adun there !

Not only Gerakan. Surprised that MCA, UMNO, BN, Perkasa etc didn’t make much noise about this issue. Why?

Have traffic management been taken care when the state allows reclamation for property development?

I always wonder people’s say there is no more land but out of the blues suddenly new house,apartment, factories lots and shop lots suddenly appear in front of me. All this happening in prime area. Shop lots especially plenty in my housing estate but they keep building and someone buying it for speculation.Even the old part of my housing area the shop lots are 35 to 40 % empty. The new part almost no tenant and all for sub sales.The radius of this shop lots around 1 km to 2 km . Even my few friends in real estate telling… Read more »

Penang island will have great challenge to build new homes and facilities for the growing population since the land is limited, and many peoplw seem to oppose to reclamation or hill cutting.

The problem is the most of the homes being built are beyond the reach of the working class.

This wonder of Penang is no different from the splendour of WorldCity, all catering for the rich and not the commoners. Soon the class divide will become more apparent on the island.

Social classes become more distinct now. In the past, the types of car define the binchui factor. Now it’s where you live on the island that signifies your standing. Thumbs up if you agree with this statement not from me but from the masses.