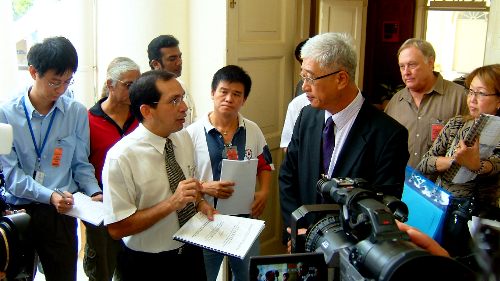 At 3.15pm today, sirens blared and then two thunderous blasts followed by a smaller one unnerved residents of the Coastal Towers apartment blocks in Tanjong Bunga. At the nearby Straits Regency apartments, windows vibrated – even above the 10th floor

It is not surprising that residents groups from Tanjung Bunga, Penang, have joined forces to call for a ban on current and future projects on steep hill-slopes. Yesterday morning, representatives from these groups handed over a memorandum, signed by 1,558 residents, urging the Penang state government to do something.

They are not interested in stop-work orders; they want a permanent ban.

In their memo, the Chee Seng Gardens Action Committee against Dangerous Hill Slope Development and the Tanjung Bunga Residents Association  also highlighted a string of abuses complete with supporting appendices and photos.

They pin-pointed the Bolton Surin project and the on-going land clearing, blasting and construction work there, which they allege is poorly supervised. The groups claim that the geotechnical report for the project was not comprehensive while the project work allegedly went beyond the scope of the report. They are especially upset over the land clearing, which they claim is being carried out even on Class IV hill slopes.

The residents groups are alarmed that the authorities have not adequately supervised the rock-blasting and the removal of rocks and soil from the construction site, and they worry that measures to prevent malaria and dengue outbreaks have been inadequate.

The two groups conclude their memorandum as follows:

Based on the above abuses by the above mentioned developer of the Bolton Surin Project development site, TBRA is in complete support of the Chee Seng Gardens Action Committee against Dangerous Hill Slope Development. TBRA fully supports their call to the State Government to review all approvals as provided to the developer for Bolton Surin in the light of the perceived abuses highlighted in this memorandum. Thereafter, TBRA joins with Chee Seng Gardens Action Committee and all other Action Committees in Tg. Bunga, such as the Solok Tan Jit Seng Action Committee against Dangerous Hill Slope Development to urge the State Government to undertake the same scrutiny for all other hill slope development projects for the entire state of Penang.

TBRA also calls upon the State Government to take all required action to determine if there has been any abuse of power to approve the land development works for lots 4204, 4165 & 4166 which is not covered under the Geotechnical Report for Lot 4189. Additionally if no permit was given, then to investigate why GLM Properties Sdn. Bhd. (the developer of Bolton Surin) was allowed for so long to undertake land development on these unapproved lots.

Additionally, as all Class III hill slopes are risky and Class IV are considered extremely dangerous to develop, we call upon the State Government to implement an immediate ban on all current & future hill slope development on Class III and Class IV hill Slopes. Banning land development on all Class III and Class IV hill slopes will be in the best interests of all residents of new property and other long time residents of existing properties in Penang. Such firm action will ensure the long term safety and wellbeing of residents are given paramount importance by this State Government.

We cannot afford to have a second Highlands Tower or a second Bukit Antarabangsa incident happen in Penang.

We believe that the measures mentioned above will be very popular measures by right thinking Penangites and it will go a long way towards proving that the DAP and Pakatan Rakyat Government of Penang is serious about making Penang a better and safer place for all in terms of land and housing development .

If the project is approved by Majlis, then we should stay on with that project. We need to come out with sound engineering practices.

General Election March 08 is over long ago. So should learn like USA where citizen support their government. If you dun support, then be ready to stand as a candidate for the next general election.

I used to hear, education makes people easy to be lead. If I cant be a leader, be a good follower. Then, peace will be upon this nation.

George Aeria,
We are proud of you!

Now please nail the b…. responsible for putting the Tanjung Bungah residents and the many users of the Batu Feringgi coastal road in harm’s way.

Dear All With the submission of the Memorandum to our State Govt, via YB Phee, the TBRA and the CHee Seng Gardens Action Committee has decided to give our new and better state government (from the last one-lah) a 2 month period to see concrete action. In fact in my discussion with YB Phee on the day of submission – he did indicate that he might come back to us earlier. We are please with his statement and his care to the environment of Penang To put on record – the TBRA and Chee Seng Action Committee is VERY aware… Read more »

Children, if your daddy happens to be one of these cynical, money-grubbing, nature-insensitive “developers”… give him a chance, talk to him and make him see the error of his value system. If he refuses to change his destructive way of making big bucks…. disown him!

When you drive around Tanjung Bungah and Batu Ferringhi, you just KNOW that something’s got to give! It’s all so built-up! Concrete towers everywhere! What has happened to the greenery and hills that used to define Penang’s uniqueness? This cannot keep going on like that. To say the State is afraid of lawsuits is just a cop-out. Lawsuits and developmental policies are all part of governance; it just has to be done. It has been said that LGE is not from Penang, and so he feels no nostalgic compulsions about wanting to preserve the place. Or maybe being the accountant… Read more »

The politician who was ultimately responsible for approving these types of projects should reflect on his karma.

…. at Lin Guan Eng and Koh Tsu Koon . Both of them do not want to do anything to the developers.

Unilateral decision by a parent to convert a child below age is the worst thing to happen in a civilised society. Religion does not say that this is right. It’s only the intepretation of some zealots who feel that the father has the right to do so. The government should stick to their recent decision that a father cannot do so without the mother’s consent. STICK TO THIS. With this ruling, many will not just ‘convert’ for some ulterior motives. A mother and her children too are human beings who need to be respected. Good that PKR and DAP have… Read more »

Yes. It’s going to be Dr Mansor for Penanti as predicted. PR or PKR for that matter has learned a lot from it’s short past. No more posman (with due respect to the dedicated ones) chosen to become a candidate. No more desperate moves. PKR has matured. Many more professionals are joining the party. This augurs well for a 2-party system in the country.

How come the residents around the site were not consulted before approval as it should be? How can the previous government approve so many high rise buildings so close to each other?

The project has to stop and if the developer wishes to sue, they can sue the previous government. The safety of the people should come first. PKR, DAP, do something to show the people.

Good for TBRA ! Finally some people are not taking silence for an answer; they want a ban. As to all these fears over sueing, how can those companies sue … It is about time a real investigation took place; an independent one if there is such a thing in Malaysia. Let the People’s government show they can stand up for the people.
Hubert

Yes, frankie, agree absolutely with you and honestly it actually gives me the creeps when I drive along the winding road my the family. I have this phobia and feel that the earth may just soften causing a landslide pretty soon, in view of the constant downpours apart from the traffic obstacle you mentioned. Anyways, I pray that the current state administration will hear the people out and do the needful. By the way, with all this luxurious developments, does Penang residents really have the dough to afford owning them or was it a deal between ex administration with the… Read more »

The residents of Tanjung Bungah should pay their fellow resident Koh Tsu Koon a visit. After all, they elected him their assemblyman for eighteen years.

He had kept a disgraceful silence on the land scams so far. It is time he sheds some light on how the approvals for the developments of the Tanjung Bungah hillside came about in the first place.

Whatever the reason, the present state government should take leadership and discuss with the developers to ensure that appropriate steps are taken to conform to the statutory requirement and obligation expected of them when they go about with their work.

Blaming the previous government is not the way to solve a problem.
The rakyat expects things to be different ie. more transparent and more caring, under a PR government.
Otherwise, why vote for a change when change is not forthcoming?

Dear YAB Lim, please don’t disappoint them and us.

I drove past Batu Feringghi today, realised that many new development have taken place, many more building, low and high rise building mushrooming but one thing remain the same, the road which see some part widens, some part, the one with narrow winding part still the same.

Honestly, Batu Ferringhi is not going to be the place it used to be. If the mushrooming high rise on hill slope do not choke Batu Ferrighi, the traffic will do the killing.

Bet the former is laughing hard.since they already took thier gains, whereaes present has to bare for all the losses.

There are issues not only on enforcement but also at approval stage, how the state bureaucrat calculate the slope steepness, and how the slope is being categoried and based on what criterias and constraints should be highlighted too. Read my write-up on “Hill Cutting Raises Concerns, Questions”
http://eusoon.blogspot.com/2009/04/hill-cutting-raises-concerns-questions.html

Sad that the residents have to make noise. The authorities in the first place should be the body to safeguard the interests of the people from any element of danger.

In KL, some projects cannot be touched because money has been paid into pockets.

And we know very well, once money has been paid, there is no turning back.