The Tanjung Bunga Residents’ Association, together with Teh Yee Cheu, the Adun for Tanjong Bunga, held a press conference this morning to highlight the pollution at the Tanjung 1 project, a huge high-rise condominium development between the Cove and the Penang Swimming Club. 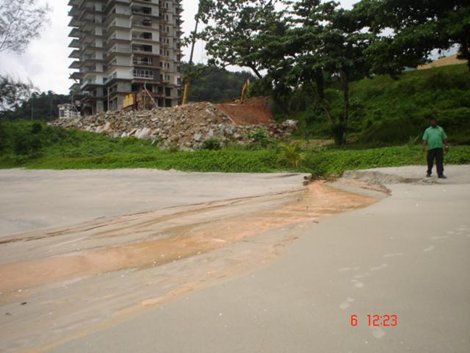 The Association was represented by its Chairman, Dato Dr Leong Yueh Kwong, while Teh chaired the press conference.

TBRA said that the much of the massive development along Penang’s beaches are on ecologically sensitive areas without any close supervision and monitoring by the Department of Environment and the local authorities, and they are causing irreparable environmental damage to the coastal areas through soil erosion and water pollution from the runoff.

“Nowhere is it more clear than at the Tanjong 1 tower being built at the edge of the sea,” said Leong.

“In their rush to complete the condominiums, the developers are ignoring the environmental impact of their construction. Their huge posters on the main road show the unspoilt, pristine beach in order to promote sales of the multi-million ringgit apartments.

“Down on the beach, it is a different story: mud turns the sea orange as the rain washes the earth downhill whenever there is a heavy downpour which is very frequent at this time of the year.”

Tanjong 1 has been encroaching on public land by bulldozing rocks and soil beyond their limit.

The Association is concerned that the authorities seem unwilling or unable to stop the pollution of the beaches and coastal waters, despite some earlier efforts to help clean up the beaches. In March 2012, MPPP joined the residents in Tanjung Bunga for a massive ‘gotong royong‘. More than 200 people helped to clean up the beach and also prepared a path for public access to the proposed Tanjong Bunga Coastal Park.

This month all of that was forgotten as the private developers went their way to expedite their construction regardless of environmental concerns.

“Tanjong 1 brazenly removed all the fencing on the seaside and is bulldozing excess earth and rocks onto the public beach and park area. MPPP should be protecting the beach by regularly overseeing the impact of construction works,” said Teh.

TBRA is once again asking for the immediate gazetting of the Coastal Park which has been promised for years. This request has been made many times over the past four years but nothing has been done. Letters to the Chief Minister have gone unanswered.

“The people of Tanjong Bunga are tired of waiting patiently and politely. They want a public recreation area. They want to save the Coastal Park now. They want clean seas and public beaches. This is part of state government’s often trumpeted policy of a cleaner and greener Penang which we all support.

“They don’t want the government to allow private developers to snatch the coastal park away under one pretext or other. That would be one scandal too many,” said Leong.

The Tanjung Bunga Koay Kau Residents’ Association chairfish: “I have lived here as the how-many-hundredth generation of Koay Kau among the anglers’ rocks behind Dalat International School. I was told by great grandpa that we Koay Kau were the smartest of all fishes to get free baits everyday from die-hard anglers who had a hard time to bait-hook us up. The fresh, less acidic & clear (pristine) sea water worked to our advantage as we could see clearly our escape routes in between rocks. Then the sea was very deep & wavy, thanks to the strong water current & no… Read more »

“Letters to the Chief Minister have gone unanswered. ”

Shut up Gerakan K. Nothing good comes out of your filthy mouth. Work with state to improve. LGE stepped on your toes? Such disgusting remarks from only un-educated fools.

It really seems like the authorities don’t really give a —– about our beaches. A few of us have sent letters to the CM to highlight the serious environmental issues and watersports issues (Batu Ferringhi) but he never responded. Tanjung 1 will be a guaranteed EYESORE. The Cove jaunts out like a sore thumb and is horrendous. According to several councillors at the recent PenangForum 4, there are building regulations and rules…Someone MUST answer, WHO APPROVED TANJUNG 1? And yes, I remember all that hoo-haa about creating a public park…is that all BS? CM, you must clean your own backyard… Read more »

Precisely, before worrying about the pollution in Pahang let us make Pg a green and environment friendly state. No point saving on plastic bags and polystyrene containers when big fish like these are destroying the beaches and polluting the sea on a daily basis. Who approved Tanjung 1 doesn’t matter, we can’t stop them from building it now. What we can do is to ensure that they do not destroy the environment and if possible require them to contribute towards conservation. For a start they can sponsor the proposed coastal park.

You are absolutely right. They have my full support. Of course there will be those who will argue that development is very important for the state. I agree with them but development has to be regulated and be in appropriate locations. Having your construction waste run into the beach and sea is definitely not following regulations yet the state govt and MPPP prefers to close one eye. We all know that the project may have been approved by BN but enforcement has to be carried out by the govt of the day. The state govt has said that they have… Read more »