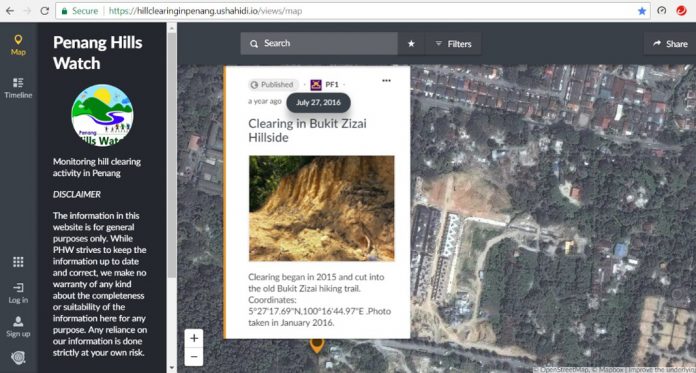 Of the dozens of cases of hill clearing highlighted by Penang Hills Watch, the site of the disaster this morning was the first in a series of dozens of cases brought to the attention of local authorities earlier this year.

The disaster site today was case number 1 out of an initial list of 29 cases for which Penang Hill Watch, an initiative of Penang Forum, sought clarification from the state government. [I had blogged about it here.]

You can see the Penang Hills Watch report of the 29 cases here, which was submitted to the state government on 2 January 2017.

And the state government’s response on 26 January 2017 was “Kerja tanah dalam pemantauan” (the earthwork is being monitored). (The earthwork had been approved on 30 June 2015.)

And this is an artist’s impression of the Granito project by BSG at the site.

How many other migrant workers have perished at construction sites, with hardly any news about them or how their families were compensated (can any compensation ever make up for the loss)? Are these ever reported?

Not far away from here, near the Surin condo, another case (number 4) was highlighted by Penang Hills Watch. This morning, a concerned resident informed me of a ‘waterfall’ at the site. 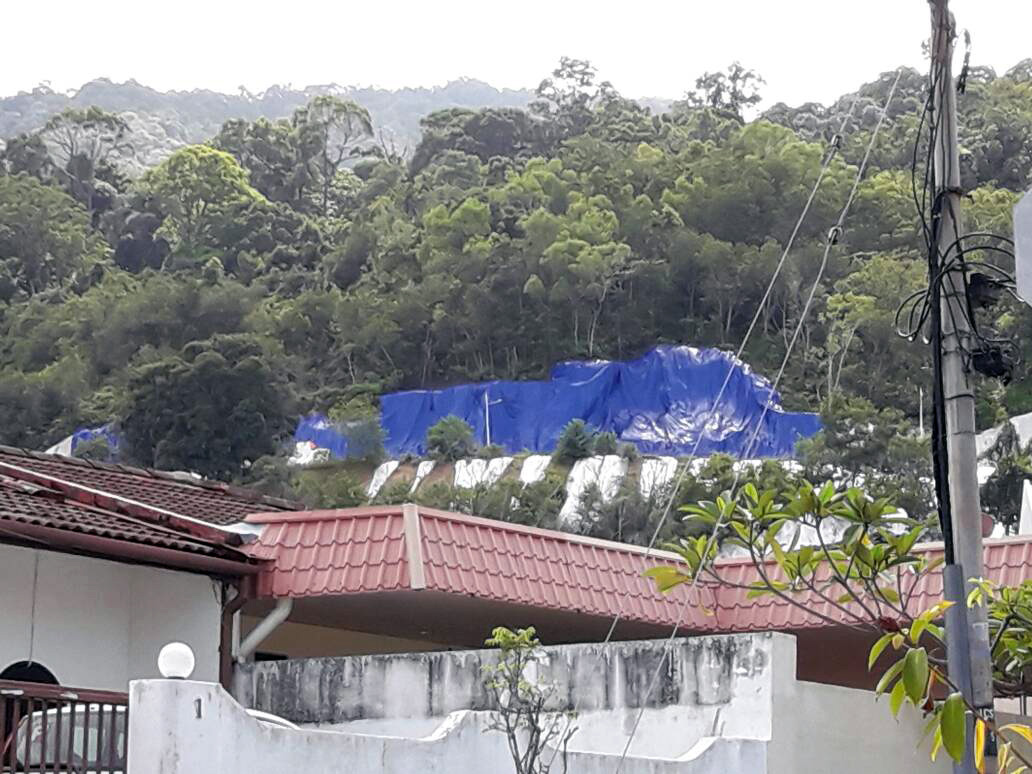 “People walk here morning and evening,” said the resident. “(The site is) disguised and hidden by bushes. There is a big waterfall here. We can hear gushing water.” 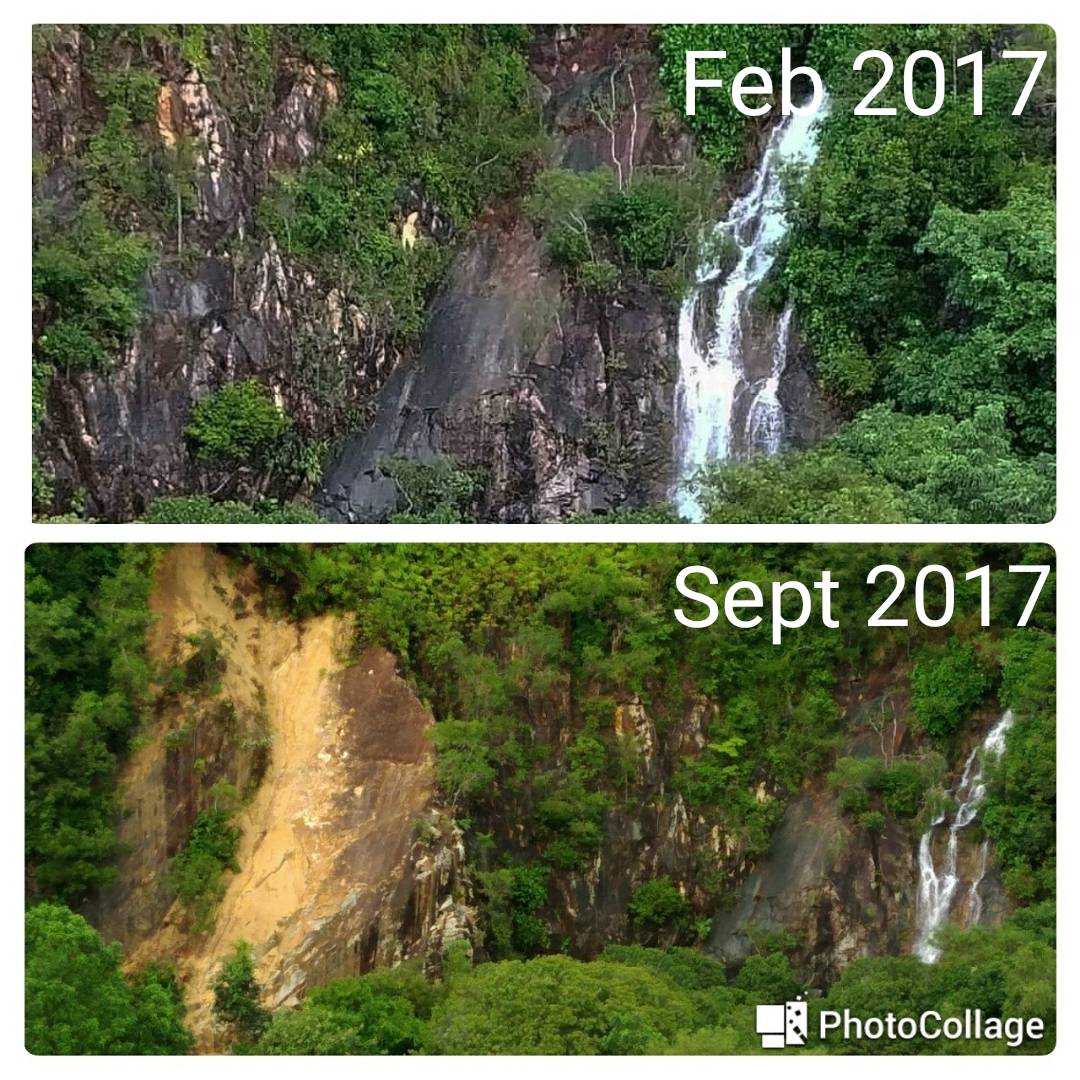 You can see the extract from Penang Hill Watch’s report on the case here: 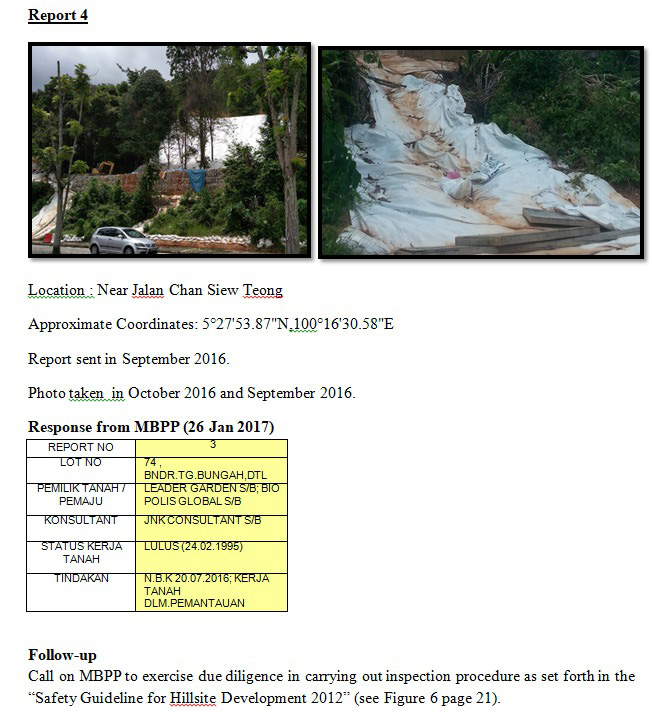 How were these projects approved in the first place? Who approved them? Can we have some names? Will anyone take responsibility?

A thoroughly independent probe is needed. It is time to put a stop to all property development on the ecologically sensitive hill-slopes of Penang.

Pray hard for the project to DISCONTINUE. No matter the landslides issue can be settled or not, the nearby granite quarry is a big reason for the developer to stop the development. They keep on highlighting that previously they able to get approval from the government on development near the quarry but why not this one? Commonsense tells me, those previous developments are not that dangerous because they are typically low building. But this project, BSG Granito, it is a 49 level high building. I don’t think they don’t have the commonsense, but they just ignore it. SELFISH & IRRESPONSIBLE.… Read more »

It all started from greed of massive money, by both CAT gomen & greedy-not-enough developers. Just b’cos of PTMP Dream of Cosmopolitan Penang Frenzied & Financial Portfolio to boast annually. From the Penang State Planning Committee (SPC) which holds broad power above all, even to disregard DOE directives. MBPP merely follows order. It has no independent status other than to lick CAT’s paws. All excuses of past approvals in Tanjung Bunga (by Gerakan state gomen) is a blatant ticket to do the same misdeeds by CAT, which were decried by DAP before 308 La-La-La. Of course, to CAT Gomen, Penang… Read more »

EIA, DEIA, SIA – so many nice, me-too terms. But such reports may only be available in the remote jungle (as in the case of Bakun) or in a restricted room with no copies. Bolehland also practices pre-emptive “approval in principle”. Fed. gomen now says it was only “advising” against this particular project.

I have seen a very large water tank on a hill at the edge of a housing estate. It is about 60m from the nearest houses. There was erosion just below the tank, followed by the stop-gap resort to plastic sheets. Later, some remedial work with concrete and piles was done. I still find the criminal irresponsibility that led to the earlier erosion frightening. Untouchable tuans supervise public facilites and large, private projects in name only. Vital facilities are even left unlocked, e.g. semi-govt. phone and electricity sub-stations. Everything that can be outsourced, privatised and plundered is allowed to deteriorate… Read more »

Cosmopolitan Penang Frenzies = more hill development? Excuse that land is scarce = to ‘free up’ more land > hill land zoning should be converted to housing development zone? Zoro was shrieking for it many moons ago, now will Shriek shriek for more hill cutting for more unsafe houses? With Penang Hill being a sensitive hill to development & human activities in the name of commercialisation (make more money), we saw the state gomen tangoed with Fed’s Satu Lagi Projek Upgrading Pg Hill Railway. Was it also an engineer’s fantasies (make more money while the CAT gomen “bisu”)? I hope… Read more »

No complains or objections when angmo built road, funicular and houses in bkt bendera? No body complain how much deforestation just for few privilege ones who will go there once a while. If more visitors go, will pg forum request pg Hill Corp to impose quota?

Let us see how “Competent, Accountable and Transparent” the Penang state government will be with regards inquiries and investigations into these issues.

Meanwhile, is there any way for the families of all those who perished in this catastrophe to sue those responsible for negligence, tort or whatever?

Compensation: Why do you think most of the workers are “illegal”, uninsured, etc.? It is a vast scam – in many countries including “advanced” ones.

Recently, a court fined a factory RM20,000 for the death there of its employee. The safety officer represented the factory. No mention of compensation. No problem.

If factory in Malaysia under federal factory act is unsafe, how much more is in construction site.

“If factory in Malaysia under federal factory act is unsafe, how much more is in construction site.”
Why not ask your highly worshipped SPC Chairman?
You should have been told more, or else how to spin gau-gau?
Should I address you as zoro or Shriek?