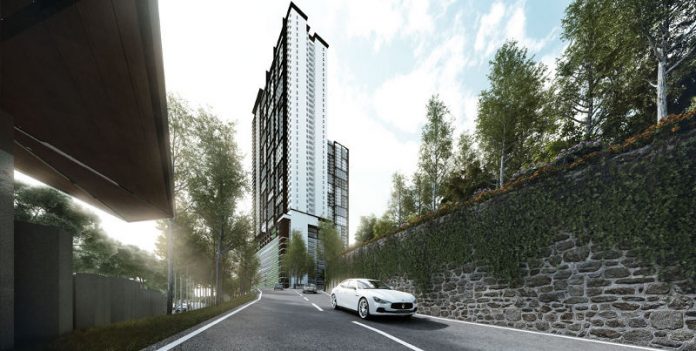 The over-riding plan governing development in Penang is the Penang Structure Plan. Gazetted in 2007, it should be legally enforceable.

That, in my mind, should be the main reference point.

The Tanjung Bungah Residents Association took the matter to court, but it was thrown out on technical grounds – the matter was time-barred, the state argued. But the NGOs maintain the text should take precedence – and that the maximum density should be 15 acres as stated in the Structure Plan text: 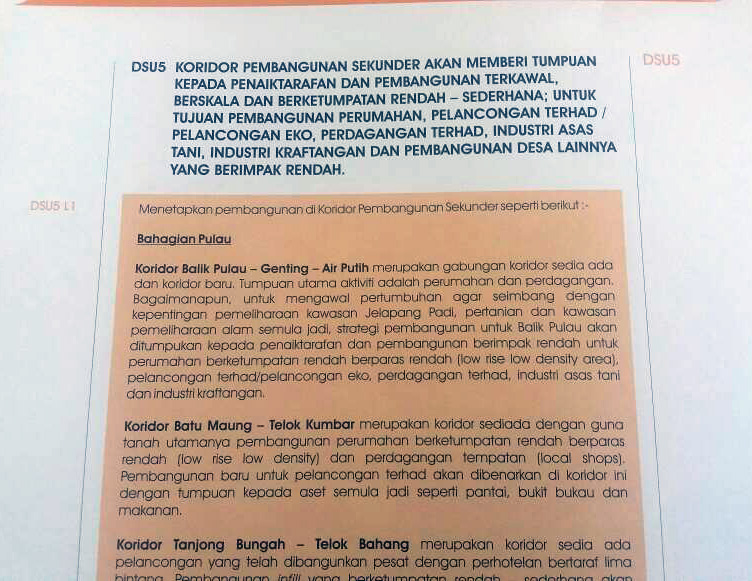 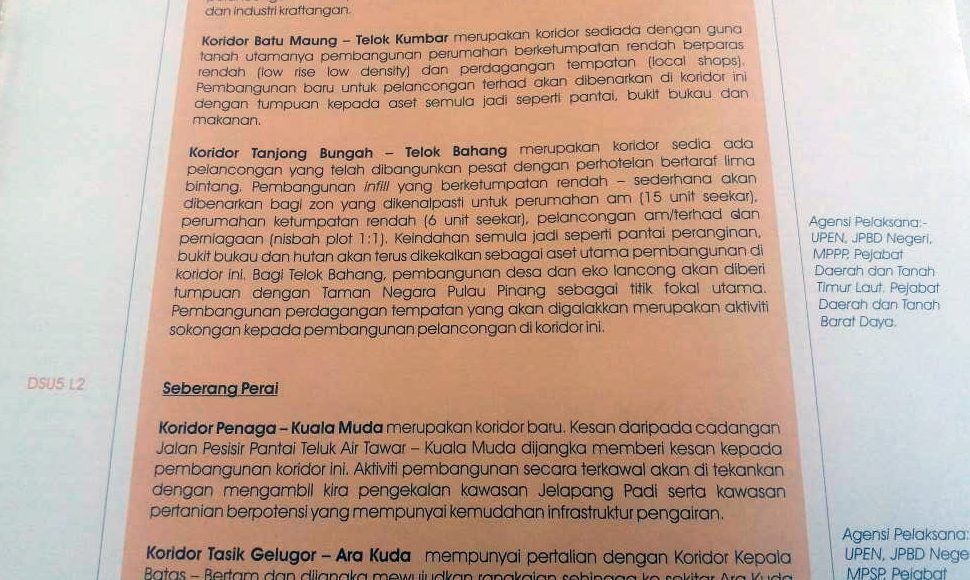 Even if Tanjung Bungah is a primary corridor, that would make it a maximum permissible density of 30 units per acre under the Structure Plan.

Remember, the Structure Plan is a legally enforceable document unlike the 1996 Plan Dasar, which is just a guideline.

So what is the density of the 50-storey tower blocks with 980 homes? What about all other projects in Tanjung Bungah – and elsewhere – approved since 2007? The state government should tell us all their densities and what is specified in the Structure Plan.

Granted this particular project is for “affordable housing” (at what price?), but let’s look at how the state/local council decides on density and the legality of such decisions when compared to what the Structure Plan specifies. [Is ‘affordable housing’ really affordable to the lower-income group – this is another issue discussed elsewhere in this blog.]

That approved Local Plan should then have been put up for public display so that residents could know what would be in store in their neigbourhoods and provide feedback or objections. This public feedback should have then been incorporated into the Local Plan and the plan modified if necessary before being gazetted. But this was never done.

So here we are, nine years on, with an approved local plan – which most people have not seen – that was never gazetted. Which is as good as having a Local Plan ‘missing in action’. Why was this local plan kept in cold storage?

The state government has argued that two other projects near the quarry were approved by the DoE. but these are low-rise projects. Nothing like the twin 50-storey towers – though on somewhat flat ground – in the pipeline close to the hill-slopes.

Now those slopes may be Class 2 (less than 25 degrees) but that is not the only consideration. You have to also consider the terrain, the water tables, gradients above, the load or weight at the top of the slope, and any signs of instability up the slope as a result of the quarry and blasting. A lot of other factors determine slope stability. Was this done? If these are not considered, any excavation work at the base of the slope would be even riskier.

The state government had also indicated to Penang Forum on 26 January 2017 that earthwork at the site would be monitored. Perhaps it could tell us what kind of monitoring was done and what they found. In the first place, does the council have enough engineers to independently monitor such sites (and there are many other sites near or on hill-slopes on the island)? Such monitoring of slopes should be an ongoing affair – even after construction is completed and the homes occupied.

Hope the sincere councilors of mbpp will find the answers raised by Anil, in particular whether the structure plan was followed.

Liew listed down 7 points where the Najib administration hampered Malaysia’s growth. Firstly, Liew said Najib failed to ensure a fairer distribution of domestic consumption since the global financial crisis in 2008 which led to workers being paid less to compete in the export market. “During the export-led era, paying workers less allowed us to have competitive prices in the export market. “But today, paying Malaysian workers better means more sustainable income-driven domestic consumption,” he said. Secondly, he said Najib has not brought the nation beyond the labour intensive model which focuses on unskilled labour. Liew said the nation should… Read more »

Thank you Eric for posting such video.
Good to hear alternative views from Harapan.

Tomorrow Najib is unveiling his Bajet 2018 – expect plenty of gimmicks ahead of GE14. BR1M could be increased to lure votes. Likely higher import levy and further removal of subsidies on ‘non-essential items according to Umno’.

Wait til full investigation for the landslide to be completed before we criticise with actual facts and not hearsays by NGOs.

But right now what is impacting us is the 2018 budget. So should expect more coverage of budget in this blog and not to dwell too long on the landslide matter until the truth is found from investigation.

And what’s that got to do with this topic? Unless of course you are a member of the KOMTAR propaganda team out to mislead and confuse people.

MCA is getting overly excited over Education Minister’s (note not PM’s) in-principle approval (note not funding) to build 10 new chinese primary schools (note no timeline specified). Is this not an election ploy to lure chinese votes?

If go by PM’s TN50 vision, will these 10 new schools be realised and built in the next 32 years? MCA will have to seek funding from the chinese community since PM never mention financial support? PM may cancel the ministerial approval if he cannot secure chinese votes in GE14?

But how can komtar compare to the propaganda with 12 billion budget allocated to pm section in putra? You got a good start for pm section. You must have a good job. Share with ah pek.

Guan Eng: DoE didn’t request EIA for Tanjung Bungah project site https://sg.news.yahoo.com/guan-eng-doe-didn-t-request-eia-tanjung-073200294.html This is the most outrageous answer coming from a CM! Q: When DoE rejects an application outright, should it request for an EIA to waste more time or maybe be influenced to change its mind? Q: Knowing that obvious rejection, why go ahead to take calculated? risks (based on an approval for the project given by the One Stop Centre Committee (OSC), which consists of more than 20 technical agencies)? So, 20 technical agencies are better & more qualified than DoE judgement? Why weren’t they presented to prove… Read more »

The more he opens his mouth and talk, the more idiotic he sounds. I am shocked by the outright lies and spins being spewed by the propagandist of this CAT regime. People who have no business in this and not a part of the state govt are jumping in for the defense of the Tokong rather than offering anything constructive or appear to be remorseful.

The more you open your mouth and talk, the more foul air you emit.

C Sankaran only appears when he has the opportunity to whack the Penang government. Other than that no constructive views from him.

Concerned Penangites raise red flag to proposed construction of highrises on a slope behind their neighbourhood https://malaysia.yahoo.com/news/concerned-penangites-raise-red-flag-090205015.html Fearing landslide, residents protest against Penang hillslope project https://sg.news.yahoo.com/fearing-landslide-residents-protest-against-penang-hillslope-project-120100219.html Someone with family can sleep soundly at Jalan Pinhorn but not the sleepless residents in Taman Sri Rambai and Taman Lau Geok Swee. The White Shroud of Bukit Kukus doesn’t look very good but ominous for the residents 24/7/365. If some think worshipping Deity is good, pls have a human heart for these sleepless residents. Not after an ‘accident @ work site’ claim with a RIP condolences. Karma is watching closely at someone &… Read more »

If nobody cares to buy hilly homes, then the developers will have no choice to halt such development. Consumers need to be cooperative.

Cooperate to take risks (of imminent disasters) knowing full well what could be in store?
How to sleep well everytime it rains cats?
Pay for a high ticket product that chances one may end up dead?
Where in the world can you find that kind of corporate-loving consumers?
Consumer Association of Penang, hard luck to your purpose & existence if Penang Langs are that cooperative!

don’t visit bkt bendera too. Is the rail safe? safe to go to genting?

Admit or not, you are still ah pek and tun lang.

At least, I don’t hide under a second name (for dubious purpose) like you zoro!
One have to be brave to take shots by trolls like you who doesn’t agree with me & many others. One have to be honest not to masquerade as another person with a dubious purpose to continue (after failing zoro mission) to confuse, spread lies, spin & worst of all to continue character assassinating.
All I see zoro ala Shriek is a coward.

After starting the KL (FT?) structural plan around 2010 and great expenditure, the multi-levelled bureaucracy abandoned it this year. Penang is playing the same game – so much for “transparency”. In the “little red dot”, a great deal of info. and plans is in the public sphere including precipitation, flooding potential, traffic density, development plans, aggregate consumption of utilities.

Penang housing exco Jagdeep Singh Deo said Putrajaya should set the limit for hill land developments at 76m above sea level and 25 degree gradient. That is the limit followed by the Penang Pakatan Harapan government. The national guidelines by the federal government allow all types of development on hill land up to 300m above sea level. “For the federal government to show sincerity in dealing with hill land development issues, Penang would like to suggest it reviews its 300m limit policy. Reduce it to 76m like what is observed in the state ,” Jagdeep told a press conference in… Read more »

That limit of 250 feet was set a long time ago – before the present administration. But yes, the federal government should also follow the same threshold.

Yes, the Federal Government should.

on what scientific basis 76m comes about? why 6 (sick)? or 250 ft which is under british system just like 5 foot way.

Now Ah pek must be jumping 6 (sick) m high to say I am kayboo. Cornered until nothing to say but to insult people

Shriek: “…to say I am kayboo.”
SO, YOU FINALLY ADMIT YOU WERE ONCE zoro?
I am waiting for your public admission.