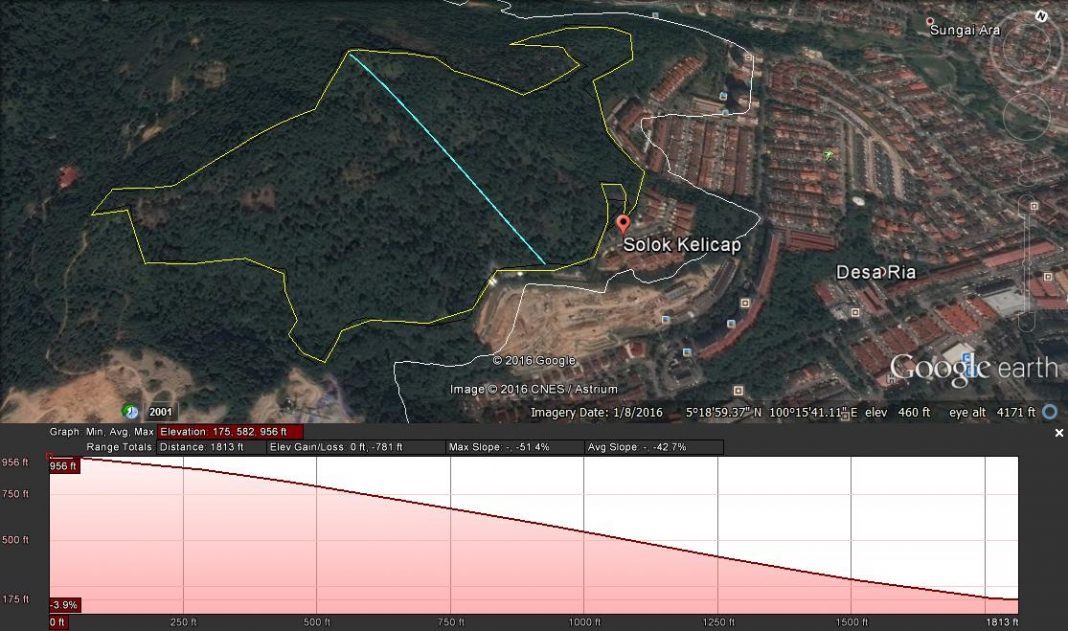 Residents in the area around Persiaran Kelicap and Solok Kelicap in Sungai Ara are anxiously awaiting an Appeals Board decision on a developer’s plan to build 14 fairly highrise blocks on hill-slopes, more than 250 feet above sea level.

White line – the 250 feet above sea level threshold
Yellow line – the rough outline of the perimeter of Lot 14345, Mukim 12, DBD Persiaran Kelicap, Sungai Ara
Blue line – see the elevation profile at the bottom of the image

The developer had submitted a project plan, which was then approved around 2012.

The residents then filed their appeal.

Around this time, the developer submitted a detailed development plan for approval.

But as the residents had already filed their appeal, they requested the State Planning Committee to return the development plan to the developer, pending the appeal.

On 27 January, they will learn the outcome of their efforts to stop the project.

lucky those residents on both sides of solok kelikap. part of the original ground is above the 250. anil’ pic shows the houses have recessed into the uphill as the contour line concaved inwards.
similarly solok kelipak also could be higher than 250 but earth excavation n cutting brings below 250.
as ususl not my backyard mentality. residents say we can and you cannot

Is this the SP Setia project?

No, I believe it is a Sunway project.

“We have to pay compensation in the millions. We already approved it. Don’t you understand???”
“Btw, let us check whether BeeN or Gelakan 🙂 has anything to do with it (earlier)”
“Come here, my cutesy CAT. Time for Friskies & Kimmy Gary MilkShake”

Below 250″ most of Sg Ara housing estates built from 80s are landed houses, the residents therefore feat for safety if there is natural or human-made landslides. Having said that, I believe if there is no herd mentality mad rush for property then the developers will not be so daring to explore slope option.

With mountain behind your home is good for Feng Shui. So it is natural for those residents of old estate below 250′ to be upset that their precious natural mountain element could be replaced by the less auspicious man-made development,

Wee Chin, it should be stopped if above 250′ whether it is for fengshui or not. Tq

If che sua khua hai fengshui principle works (at all), why did Cameron Highlands residents suffer massive & unprecedented landslides in 2014?
Mankind suffers b’cos of some greedy minds at work, fengshui or not.
Don’t know whether CAT subscribes to fengshui.
Note: when the hills are botak-ed, where to find the shui (water of life) flowing?

Every developer engages its own Feng Sui master to focus on selling. If you can get any two Feng Sui masters to agree on respective SWOT analysis, then we can be sure otherwise they simply manipulate to profit maximization per whoever engages them.