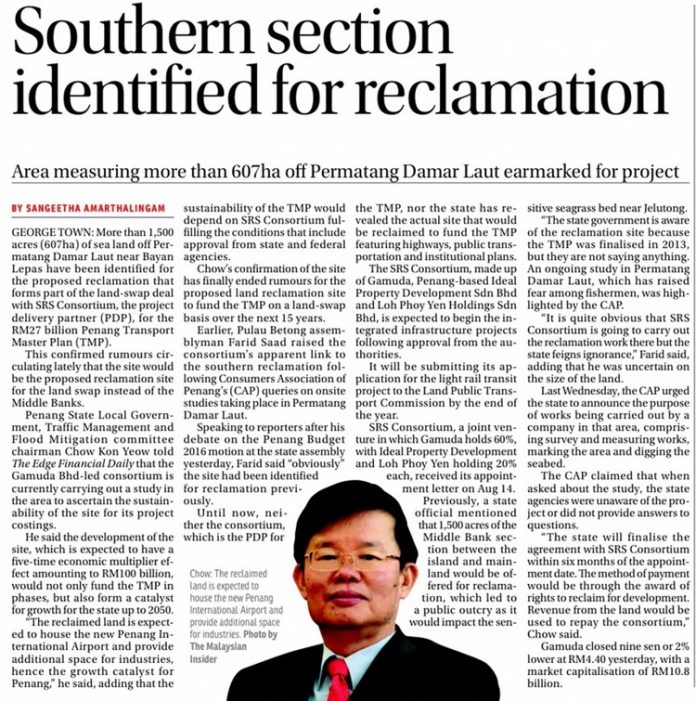 There’s been a lot of politicisation of the motion on land reclamation in Penang while the real issues surrounding the deal are clouded and shrouded in secrecy.

In the first place, we don’t even know for sure how big an area is affected. I am saying this as one report (above) in the Edge Financial Daily on 18 November 2015 said the reclamation would be “over 607ha” (i.e. over 1,500 acres).

But that 607ha figure was the figure reported earlier if the Middle Bank off the east coast of Penang Island is reclaimed.

For southern Penang Island, the figure reported earlier by Bloomberg TV Malaysia was 4,000 acres. Yes, 4,000 acres. And Permatang Damar Laut is in the south, not near Middle Bank. So it could be 4,000 acres – not 1,500 acres.

So, the state government must tell us once and for all – are they planning 4,000 acres for land reclamation in southern Penang Island? Yes or no?

And when exactly was this area signed over to the developer or other firms? I am asking this as  the state government is now warning that it would have to pay large ‘compensation’ if the reclamation does not proceed. (Ho-hum, the usual threat to silence critics.) Was this signing over done before 2008 or after 2008?

The state government must also tell us what shape this reclamation will take. Is it normal land reclamation (i.e. without any channel separating it from the rest of the island) – or will it take the shape of Dubai-style articificial islands (like Seri Tanjung Pinang Phase 2 in Tanjung Tokong) to maximise the “sea-view” of high-end property development? And if it is the latter, how many artificial islands will there be?

Why does all this appear to be so hush-hush? This doesn’t sound like CAT. People have been wondering what’s going on for months now.

All this reclamation is part of the Penang Transport Masterplan.

The other side of the coin is that this whole masterplan ‘swap deal’ thingy is just as much about plenty of high-end property development on reclaimed land, with pockets to be allocated for industrial use and airport expansion. Make no mistake, the developers stand to make big, big bucks – and that’s why the stakes are so high.

The inter-party mudslinging involving Umno-DAP-PKR about who voted for the motion in the state assembly isn’t helpful – it is actually distracting and diverts our attention from the real issues. (That said, elected reps, who represent the people’s interests, have every right to vote according to their conscience on a matter of public interest.)

Yes, we want better public transport – but don’t link that to massive land reclamation without conducting highly competent and independent EIA and other impact studies (as opposed to EIAs prepared by consultants on the payroll of developers).

Both public transport and land reclamation are separate issues which warrant careful independent study; so these two distinct areas should be studied and assessed separately with full prior public consultation and participatory decision-making. They should NOT be intertwined via land-for-infrastructure swap deals.

Who is responsible for getting us into this dilemma by intertwining these two areas via such ill-conceived swap deals? Perhaps, any compensation payable (if at all) should come out of the private pockets of those responsible – and not out of public money.

This is madness. Even with computer modelling, it is hard to predict the effects of sand accumulation/erosion, wave changes, etc., especially at the mouth of a channel/straits. A good stretch of the mainland coast may be affected.

In Selangor, the gomen is playing a similar game of hide-and-seek on the highway through the water catchment forest east of KL.

Chow let the CAT out of the Komtar Bag? The sly CAT now cannot continue denying & pointing paws at previous state gomen. What a sly …CAT. Read: Southern part of Penang island to be reclaimed to fund Transport Master Plan – See more at: http://www.themalaymailonline.com/malaysia/article/southern-part-of-penang-island-to-be-reclaimed-to-fund-transport-master-pla#sthash.7pDMHSQ9.dpuf First the denying, then the blaming, now under pressure – the revelation by his Keep Calm official. This shows volume of what kind of CM we have. A Bo-Hoot Niao Kong! C’mon. TMP is not the sole reason for the coming transformation of southern Penang Island for the rich & famous. In fact, no… Read more »

DAP would be much better off without LIm Guan Eng

Is there a news report you saw re Middle Bank?

Ivory Properties Group Bhh has entered into a partnership with Tropicana Corp Bhd for a Penang land reclamation project. What does this mean for the company in a soft property market?
The Edge TV discuss ihis here: https://www.youtube.com/watch?v=Zs_jmPhu-eU

I believe this is for the Bayan Mutiara project. Did Ivory really have the financial capability in the first place?

Penang’s housing, land reclamation projects signal end of ‘honeymoon’ for DAP, pundits say https://sg.news.yahoo.com/penang-housing-land-reclamation-projects-signal-end-honeymoon-021300077.html “Their honeymoon period is over. DAP can’t continue to harp on what the previous administration did, what’s important now, they must show that they are not continuing with the policies put in place by the previous administration, otherwise, they are no different,” political scientist Faisal Hazis told Malay Mail Online in an interview this week. The associate professor at Universiti Kebangsaan Malaysia’s Institute of Malaysian and International Studies noted that Lim has repeatedly pointed out that BN had approved more land reclamation projects compared to his… Read more »

Dear Anil,
pls help.
Will this mammoth project on?
i can’t get any info, its so secretive.

Becoz its my kampung.
My mum lives there.
My father recently passed away n buried at the old cemetery in the airport compound.
Is Lim Guan Eng DAP reviving NCER Umno’s project ?
TQ.

Yes I believe it’s on. They’re reclaiming 4,000 acres from the sea. So I hope your kampung wont be affected.

Noted Anil – I have deleted it just now since proof not ask.See many things during blogging. I don’t know why i can see but never seen a Devil.

rajraman. Thought of calling Atila and say Anil the Bee Warrior calling but in real life i don’t play prank.

Thanks for deleting it.

rajraman.Anil it’s works.I can even read Atila email and her handphone number.That’s suppose to be confidential right? Is only me can see or others also can see.
Ask to know?

hi raj, I had removed the contact details from her comment, but maybe the email notification showed the full comment before I had a chance to moderate it, so I think only you can see it now.

Atila should remember the US$16 billion project on the south-eastern side of Johor, in Pengerang, called the Refinery and Petrochemicals Integrated Development (Rapid) – said to be part of the Malaysian government’s plan to capture some of the global energy business from Singapore. As the project involved in the reclamation works to extend the shoreline of the Rapid, it has harmed the environment and affected the livelihoods of fishermen. The Pengerang Chinese Cemetery plots have to make way for the project. But the licensed fishermen have been offered RM30,000 in compensation payments for the loss of their livelihood while unlicensed… Read more »

Anil,
Can you just reply a say something. Seems doesn’t work,you are online?
Can help please.
rajraman.

Hi Raj, I am not sure why the comment notification thing is not working for you. Any others having the same problem?

Thanks Anil, Does Not Work. The old Laptop last time works but always says kill your page ( remember?). I kill the laptop get a new one,but this new one kill all.Even subscribe to your new posting no update. rajraman. It’s hard to play a game manually,don’t reply when someone reply or chased after Benny to play a game also no fun. Have a facebook this year lasted 2 or 3 months,fed up with some people posting eating also get 100 likes and never put a likes for them call and ask. This people so funny, most of them Senior… Read more »

Malaysian public likes to debate current issues., but sadly thy cannot affect the outcome.
I believe this reclamation matter will be no issue in a short while, just like the NFC case.

Reported on AEC news that reclamation deals were signed before 308, and if present government does not honour the deals then expect to pay lump sump compensation in millions. Perhaps investigative reporting should dwelve into such scenarios instead?

Which reclamation deals? What about the one in southern Penang Island?

This is what I am asking the state government to clarify.

Penang island’s turtle geographical shape to be transformed into one laying egg if southern part being reclaimed? What would Feng Shui masters think of that? If the egg being “eaten” then of course bad omen? If the egg later hatches into a baby concrete turtle, will it bring shine of the pearl?

There’s been a lot of politicisation of the issue of land reclamation in Penang while the real issues are clouded and shrouded in secrecy. Not even the Shroud of Turin is perpetually shrouded in controversies under the watchful eyes of the Papacy of Rome. To prove its authenticity, DNA testing & carbon dating were carried out in spite of religious contentions & orthodoxy. May be, the CAT should be summoned for a Lying Test in GH just to prove once & for all what exactly transpired, who transpired & what deals or secrecy that has been smoke-screened by paw pointing… Read more »

Of course those BN-aligned mainstream media politicized the land reclamation in Penang but chose to be supportive of BN’s reclamation at Johor’s Pengerang for petro-chemical industry that has destroyed the natural habitat of lobsters, affected the livelihood of local fishermen as well as removal of century-old chinese graves and thombstones.

You mean if the world renown thief can do it and the others also can do it?
rajraman . I hope this simple english for you Benny with simple question.
Looks like we going to have the next generation of thief to replace the current 2.5billion thief.It’happening already in the name of development.
2 x 5 = 9 + 1.
The anwser is still the same i think bacause i never pass my maths.

Would Lim Guan Eng Be Praised For Permitting The Penang State Government To Go Bankrupt For Paying Compensation So As To Stop Reclamation Projects Approved By The Previous BN Government That Will Only Benefit BN Cronies?

Would Lim Guan Eng be praised for permitting the Penang state government to go bankrupt for paying compensation, so as to stop reclamation projects approved by the previous BN government that will only benefit BN cronies?

No need to tell any more stories of CAT pointing paws.
Just tell us this: Do you actually understand what is a Chief Minister job?
And do you know your 28th Floor view of Penang Island is not permanent
(unlike the UN Security Council). So, do you know how to ‘best’ contribute to the state?
All it takes is a vote of no confidence.

The Alphabet666.
Reply to  tunglang

Hi Tualang,
Don’t be sad, i am back for you. Let have a war with the deity blind followers.
Cheer up buddy.

rajraman. Non member of any Organized Religion, Political Parties,Hate UMNO n Gangs, Currently will question Opposition who administered Selangor and Penang.
Kelantan – gone case only their God can help them – as far i concern.
Testing reply by email. Setting done.