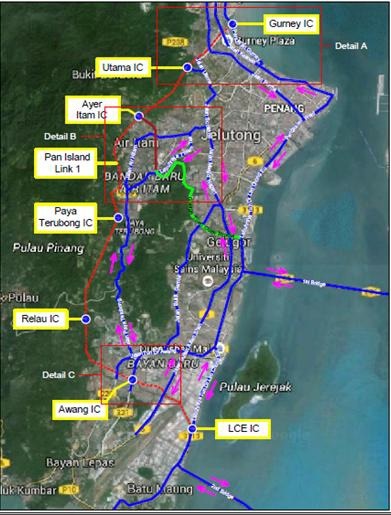 I was amused to hear that the state government has reached out to nearly 17,000 people through “public engagement sessions” to explain details about the Penang transport masterplan.

First, which transport plan did they “engage” the public with – the original Halcrow masterplan or the exorbitant SRS RM46bn mega transport proposal?

What do they mean by “engagement” – perhaps a more accurate word might be briefings, as some media reports described those sessions. Were the public presented with all transport alternatives? Were they briefed on the financial viability of each alternative and its environmental impact? Were they shown a cost-benefit analysis of the various options? Were they told that highways would get congested after five to 10 years? Was climate change and emissions discussed? If not, why not? Are we immune?

Those 17,000 people they reached out to – did they include all those in affected neighbourhoods, businesses, schoolchildren and their parents, teachers and principals, religious congregations, all park-goers?

Last I heard, the fisherfolk in southern Penang Island were not impressed with those “engagements”. Many of them stand to lose their livelihoods. Were the fisherfolk part of the 17,000?

That didn’t go down too well, did it?

I attended one of those 965 “engagement” sessions and it confirmed what I had anticipated. It was more of a top-down briefing of the SRS plans. Hardly anything about the Halcrow masterplan and why it was drastically changed.

There is a big difference between:
a) participatory decision-making, where all options are on the table and alternatives discussed, and
b) top-down briefings, where the big decisions have already been made elsewhere

a) is required in Strategic Environmental Assessments, which is a systematic decision-making process to ensure that environmental and sustainability aspects are effectively considered.

Wikipedia describes its key characteristic as

Its aim is “to support more effective and efficient decision-making for sustainable development and improved governance by providing for a substantive focus regarding questions, issues and alternatives to be considered in policy, plan and programme (PPP) making”

In the European Union, strategically enforced assessment procedures are required by Directive 2001/42/EC (known as the SEA Directive).

The operative phrase is participatory decision-making with all alternatives on the table.

I believe what we witnessed in Penang was mostly b) – that is, top-down briefings going by the term “engagements” with some Q and A. The reality is that most of the really big decisions (about land reclamation and massive highways etc) were made away from the public eye, behind the scenes.

The RM46bn “transport” plan is more of a property play linking up the Gurney sea front reclamation with the property development in the three southern islands. Indeed, SRS stands for Southern Reclamation Scheme; so that tells you where the priorities lie.

This same mode of “engagement” (top-down briefings with Q and A) was used in the Penang Transport Council – at least that was my impression, when I was in it.

All the big decisions were made elsewhere and at the transport council meetings, civil society representatives had to listen to briefings about the SRS proposal. For a long time, the SRS proposal was hidden from the public. When it was finally put on public display, we couldn’t even take photos or images from the 20 volumes to share with the public. Even now, they don’t want to put the 20 volumes online. Transparency? I think not.

True, we could raise questions and objections at the Penang Transport Council. And quite a few objections were raised (especially about the inherent conflict of interest of a contractor and developers acting as project consultants or delivery partner). The objections were noted, the explanations hardly convincing. And that was it. It was frustrating – and little changed.

Similarly, who’s idea was it to have a tunnel? How was the decision made? From what I hear, even the Halcrow consultants had to treat it as a fait accompli.

As a colleague pointed out, RTM reaches millions of people every night and briefs them about latest developments. But that’s hardly participatory decision-making.

“Engagement”, “updates”, “town halls”, surveys etc. are part of modern, corporate PR. The aims include (a) numbing those concerned with quite irrelevant info. (b) building a defence of having been open (c) conveying subtle threats (d) identifying potential threats. For the US Patriot Act, legislators were only given a few hours to approve a massive document that neutralised their Constitution. For TPP (now called CPTPP), Bolehland did not even pretend to publicise the draft; in USA, legislators were shown the draft in a secure room, but unable to even take notes. To read the EIA for a certain Bolehland construction… Read more »

Long time no hear. Resurrection. Very good to hear from you again

After the election, there are now more websites to visit for local news. Thanks Gobind and PH.

Instead of pursuing PeroTiga, Tun M should use his personal and sons’ wealth (plus Syed Mokhtar & Daim) to buy back Proton? Proton + Petron a good synergy, and later revive Sepang F1? No need totouch our national’s coffer.

If only Mahathir could believe in public bus for once.

Why? Why do you want the gomen to compete with the private sector (even undermine it and customers) when (a) this is not an essential industry (b) it is proven idiocy from p.o.v of economics and climate change (c) few other gomen’s have ventured into it? Is it because you want cheap cars at any cost, or do you have a phobia for sharing public transport with other people?

More points: (d) gomen has many, much higher priorities, and is not exactly rolling in wealth (e) it should not get trapped again in more policy contortions, e.g. building more highways to serve cars, enriching AP kings and under-perfoming crony sub-contractors.

While we are fighting for alternative transport solutions against the MONSTER (Pg Transport Monster Plan), some of us may get stressed out! Try this (watch the video): Shinrin-yoku: How Japan is fighting stress with nature http://www.bbc.com/travel/story/20180823-shinrin-yoku-how-japan-is-fighting-stress-with-nature Forest Bathing – Japan’s hottest wellness trend has been shown to reduce stress hormones, lower blood pressure and stave off diabetes. My Own Forest Bathing Experience: Walking slowly & taking in the ambience of our rainforest. Feel & breathe in the moisture air intently. Touch the ferns, brush the tree trunks. Listen to the insects, the falling leaves, the rustling of branches. Enjoy the… Read more »

Terima Kasih, Anil for not indulging in pandering journalism (apple-polishing the powers that be). Neither shrieking nor creating fake news commonly used in spinning & troll personal attacks.

Ah pek the way and the truth?? Pg lang has to be spoon fed. They cannot see the black and white???

Still the same Arrogant Penang state gomen inherited from the last. To sum it up, Penangites were taken for fools for their trusting votes of GE14, which on purpose & passion was prioritised to oust the Kleptocratic Regime of Naik Jeep. There was no audible shout of dizzy support for PTMP by any audience at any ceramah or at saliva talk + walk in the markets by desperate politicians clever with the art of Opera Face Changing. Development then should not be politicised (to garner false egomaniac among people) but be undertaken with socio-economic-environmental consideration under the rule of open… Read more »

Ah peak, not true son pg. Ah pek forgets for almost 10:years, pg is only getting peanuts and promises by his umno party to build better public transport were broken.