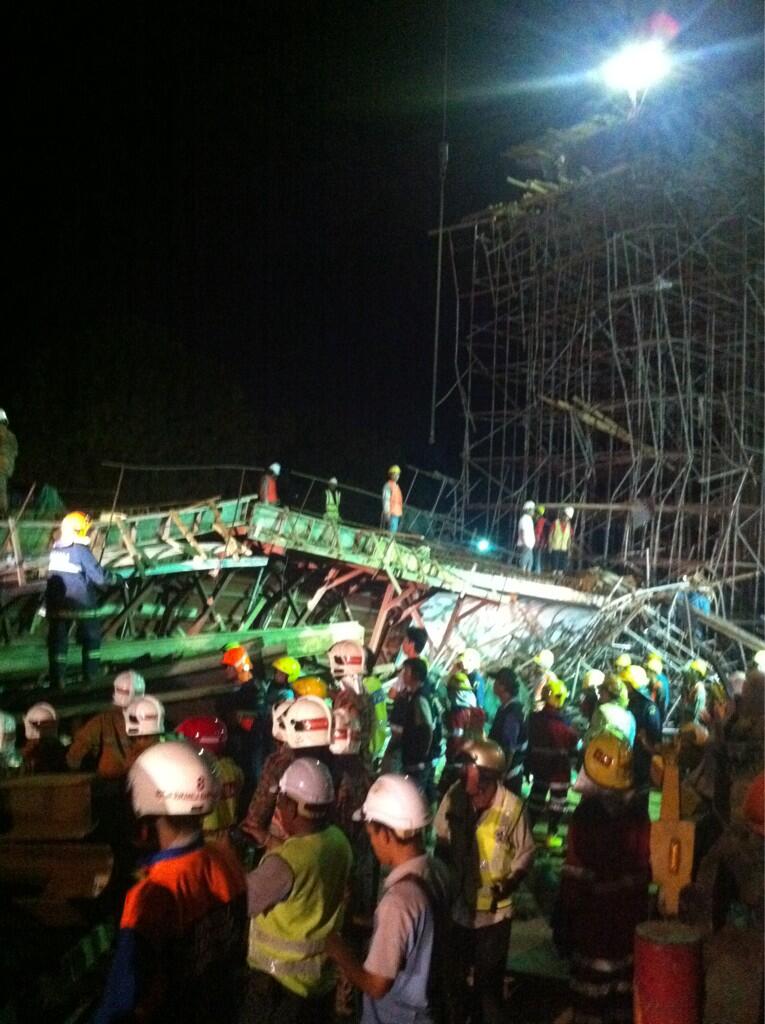 The section collapsed at around 7.00pm when traffic along the coastal road was very heavy. The fire department was briefed that a car was trapped underneath and personnel are now waiting for a bigger crane to lift the fallen section. 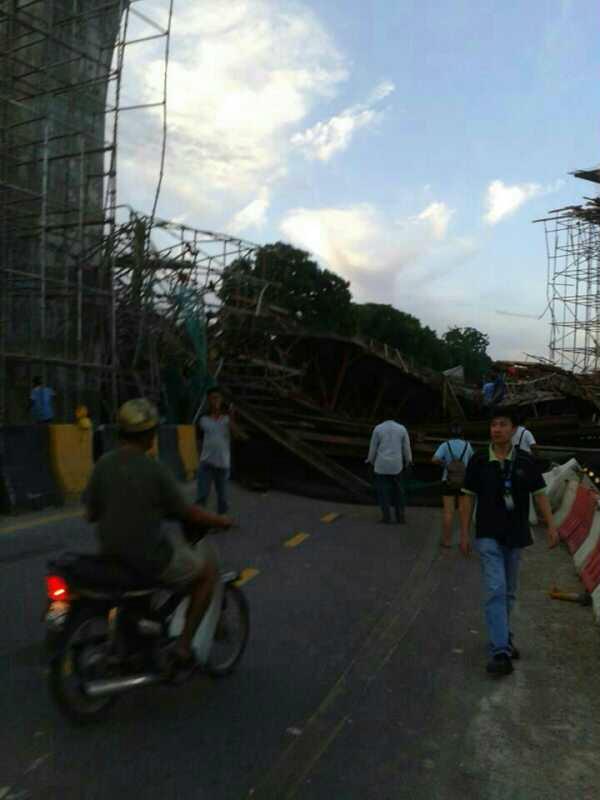 A 30m-long section of the ramp, about 30m high, at the entrance of the bridge collapsed at Batu Maung. 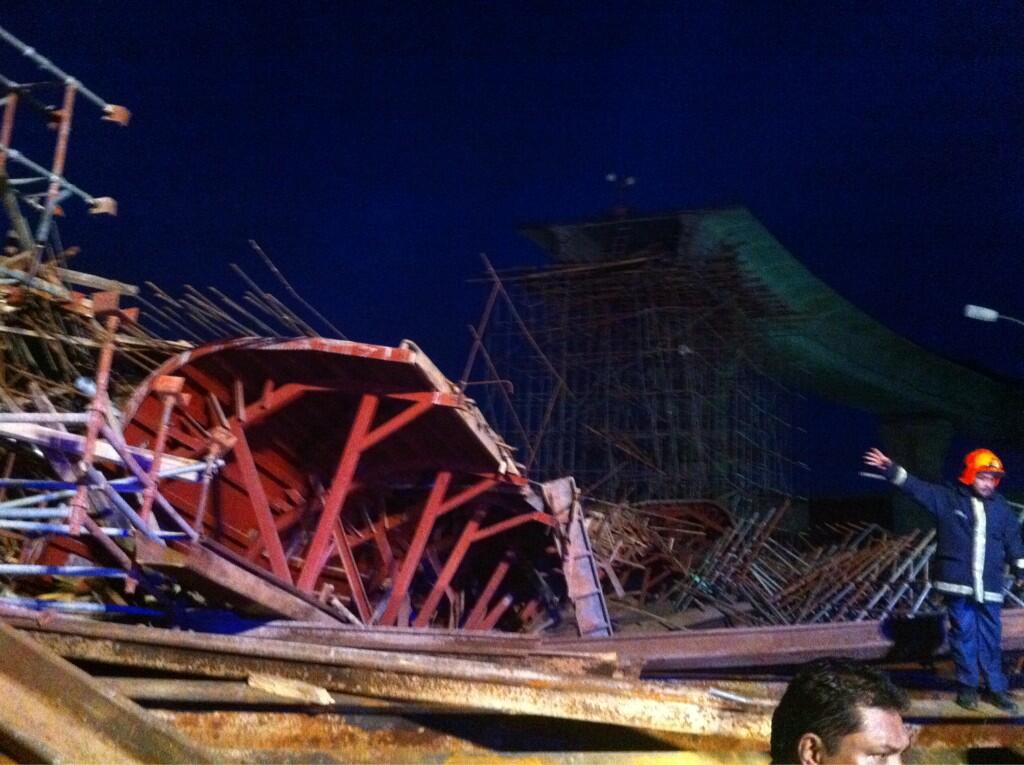 The substructure and foundation (i.e. all the underwater construction work) and the main navigation span, of the bridge was undertaken by China’s CHEC Construction (M) Sdn Bhd.

The superstructure work (above the water) of the approach span is being handled by UEM Builders Berhad.

The signboard on the island side of the bridge taken in April 2011: 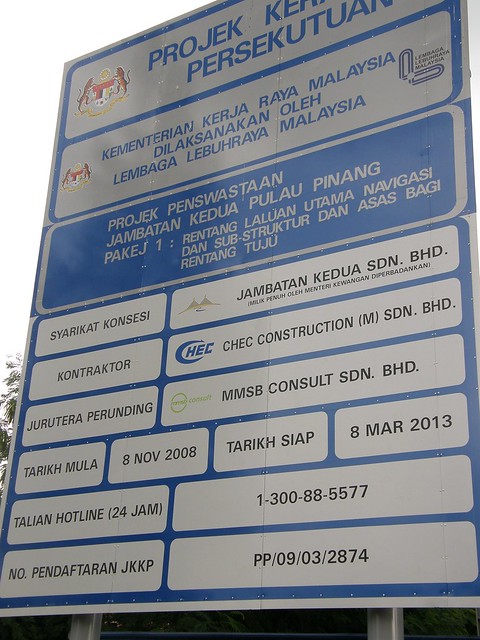 This is a slideshow of photos I took of the construction during a site visit in April 2011.

The completion date was later revised to November 2013.

And we still want to build a tunnel?

@Yang, relax. Don’t sprinkle your comments in all places even you are VIP in this blog. The said tunnel project is more complicated and risky than the bridge. Nobody can assure you anything. Nobody can guarantee you anything.

We all know the real reason behind the pricey tunnel. You can pretend as you wanted. The fact is we do not need the risky tunnel. I just warned you that “we do not need a potential tunnel to HELL” as simple as that.

He wanted another tragedy at the tunnel instead of giving constructive suggestion on how to avoid it.

Dear Anil and the forum members, I think I speak for all in wanting to extend our condolences to the grieving family. This is a very sad situation, and something we are always reminded of in this beloved country of ours (unfortunately so). As Kevin pointed out, infrastructure projects are being carried out around the world without mishaps, so we know that it could be done with careful planning, conscientious effort in ensuring the safety of workers/civilians, and proper risk reducing strategies. However, we as rakyat must feel appalled at the frequency of such calamities happening in the country. We… Read more »

Very sad for this Malay man who died in his Kelisa.
More sad for his family members who have not seen him home for dinner yesterday.
Very hard to imagine his (if any) children’s sadness & anxiety waiting for daddy home.

In this world, people are willing to greed at the expense of innocent others.

In this country, we have people in authority who will not blink an eye on projects that will fail … These people with blood in their hands …

May this Kelisa driver rest in peace. My heart felt condolence to his family in Batu Maung.

First the Stadium, now the Bridge.

You have been warned. The next one could be the tunnel.

Not Gilakan but sheer stupidiy oop not stupidity but jealousy.

No, not just jealousy alone but a BN UMNO sycophant with an EVIL HEART.

Jealous at PR DAP LGE CAT competency and will hope for others people tragedy to happen. This is what GK is hoping.

This is what we call TAU KIAM LIAO

Is he hoping for a tunnel tragedy

There are people laughing when such accident happened. Is this UBAH you want ???

people are laughing at your stupidity

He is more to laughing for PR DAP LGE to get the blame than the concern for the loss of lives.

His comment “ Is this the UBAH you want “` speak for itself.

His ignorant and stupid head does not even realized that the project was done by … a company (allegedly) controlled by an BN UMNO crony.

Now comes the blah blah… working committee and commision of inquiry conisting of people who know little civil engineering, report that blames no one, additional payment to the contractor for the delay…

I still think we should build that bridge to Sumatra.

1. How did the Kelisa car with 4 people inside get caught under the collapse? Should the site not be ‘out of bounds’ to public/vehicles?

2. Is/could a Class G contractor be deem fit to have enough experience/expertise to be allowed to tender for such a ‘major’ project in such urban situation?

Again someone trying to put the blame on the DAP PR or the State govt or Chinese goods and work are inferior but mouth are shut up when names of contractors are revealed.

LOL!!! Far too long Gerakan had his short bursts of pleasure, needs to take a rest now!

Tilting Penang Botanic Gardens Arches, Annual-Problematic Penang Hill Railway Train, and now this Disaster-Happens-2nd Penang Bridge. All Satu Lagi Projeks. All with problems & the latest one with death throes. Still can’t be sure about (safety) this Speedy Gonzales Pg Hill Coaches as & when stray dogs decide to strike the next time. As the Hokkien saying goes: “Sin S..” means inherit the ‘s…’ of any freebies or pass-on. LGE & Team will have to bear these ‘s…’ from any Satu Lagi Projek, which some cash-starved minded would innocently love to welcome at any costs to (unfairly, insanely) bear thereafter.… Read more »

I remember the collapse of the overhead exit road on the NKVE highway
from Shah Alam to Klang (near Setia Alam).
It killed two foreign workers, if I remember correctly.
And of course, the (more than once) collapses of the Terengganu stadium.

Should get independent assessment of what actually caused the Penang collapse
first. This excludes assessment by UMNO Baru/BN-linked crony capitalist companies.

Is the contractor from Trengganu…????

Let’s wait and see what JKR will come out with tomorrow; what actually happened that caused the fly-over(under construction) to collapse.

Seems every structures collapsed in this country. Those innocent died should sue the Goverment and contractors

This mishap was avoidable. Bridges and roads are being built all over the world without killing anyone. It is poor and unregulated practice that caused it to happen. Constructions projects even larger than this can be carried out under stringent control to ensure major accidents like these do not occur. It won’t be fair to assume that the tunnel will suffer a similar fate when it is being undertaken by a different govt using different a different set of contractors with proven track records thus far. Every project if not managed properly will carry risks be it trains, buses, trams,… Read more »

Wow, this is a disaster. Independent investigation must be conducted to determine the reason for the collapsed. Is this a case of downstream contractors using less and substandard materials in order to make profits due to cronyism in the award of the contracts or is this incompetency at works.

When you have a screwed up Government dishing out contracts to cronies, that is what happened. Trengganu has her fair share of runtuh. Seems like everything from BN seems to ‘runtuhing’

Cannot imagine what will happen to Penang tunnel because even less complicated infrastructure like bridge also got problems. Close one eye, think UBAH and pray that everything will be OK.

Have to agree with you for once.

If the bridge had been handled by the State Government, the bridge collapse may had been averted? Due to constant and strict supervision by the CAT administration?

The underground tunnel will be a piece of cake for the State Government, after all the underground tunnel linking Kowloon and Hong Kong were built decades ago. Only Gerakan, and Gerakan Kid does not know. Cannot blame them as they are, you know, always curry favouring for a living.

Hahaha!! Laughed until perot sakit dah! Thank you Ahmad Sobri, for speaking on our behalf; you really got him this time!

under strict dap gomen supervision, all hill botaked and nobody knows. Then after the scandal exposed, LGE still dunno what to do and need 1 month for magical explanation. Think UBAH and everything will be OK

GK. Don’t need to imagine. Don’t strain or stretch your imagination.
See the reality of what has happened with this Satu Lagi Projek (SLP for cronies).
Penang seems to be ‘killing fields’ of SLP. Like it or not.
All the more for UBAH.

Hi GK, Why are you still unashamedly still spinning despite Penangites giving Gerakan, MCA and MIC in Pg a second ‘eggs’ in 505 for both Pg State and Parliamentary seats, in fact the 2nd set of eggs was even worse with much greater majorities won? Ain’t you really aware that this Second Pg Bridge project is completely under the authority of the UMNO Baru led Federal Govt? So, what is the connection between the proposed tunnel project and the 3 expressways dispersal projects and the 2nd Pg Bridge project? Keep on spinning like this and I wouldn’t not be surprised… Read more »

What spin ??? Anil also warn about the tunnel. It is common sense. Do not pretend dap gomen can do any better in tunnel project. The hill also botak. Can dap stop it ??? Can dap restore the trees the forest ??? Just don’t kid yourself. By the way, UMNO alone already won 88 MP seats and pkr, pas, dap combined = 89. So, who is stronger ??? Now who is the fed gomen ???

Tan, GK is actually telling you that the collapse work is not done by UMNO BN cronies company but by the low standard China Co. So you see the strong can make mistake and spin to others. Oop sorry the strong can do to those like those in lockup and indict you when you have peaceful assembly. He is not spinning now. He is talking of the strong and arrogant. And he is willing to lick the strong for that crumb. Too bad thats` not for us.!!!