Mounds of wet earth tumbled down a hill-slope at Persiaran Tanjung Bungah 3 at 11.40 last night near the Straits Regency condos, close to the spot where the Tanjung Bungah Residents Association had held a tea party protest to draw attention to the risks of hill-slope development.

This was the scene this morning. A contractor moved in quickly to clear the road soon after this photo was taken: 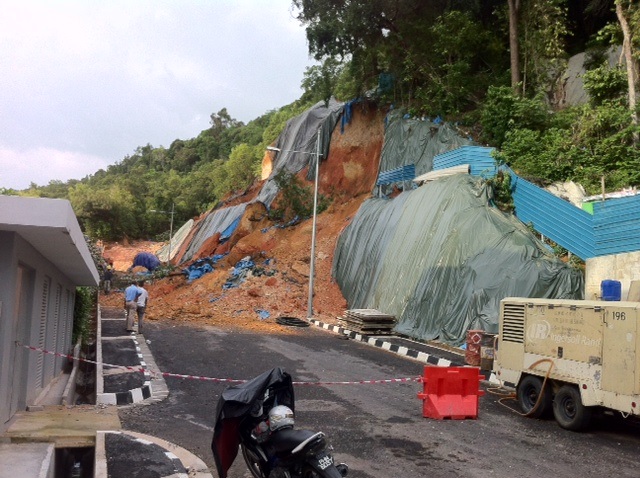 Notice that the plastic sheets on the slope could do little to prevent the landslide. It is like putting a bandaid on your skin when there is internal bleeding. 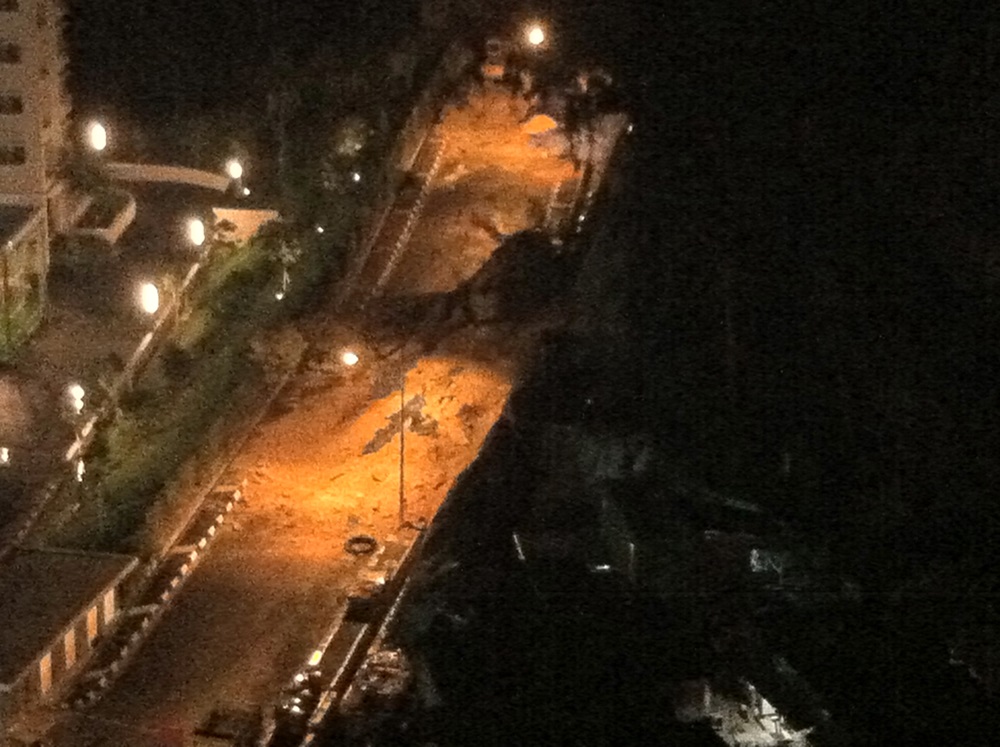 The TBRA had called for an end to development on Class 3 and 4 hill-slopes. “TBRA had on many occasions protested against development near hill slopes. This particular hill slope where the landslides are now occurring is one of them. I believe we held at least one ‘tea party’ at this location to protest BUT it just fell on deaf ears,” said a Straits Regency resident, Lee Kim Seong.

Here is one such protest in the vicinity not long ago.

An early warning of the landslide came yesterday morning when a large boulder crashed down farther along the road:

Two days ago, Lee had written to the MPPP and the local Adun highlighting his concerns about the waterways at the Ratu Mutiara worksite at Persiaran Tanjung Bungah 3 among others:

“We wish to raise our grave concern to the many incidents, past and also currently in progress, where natural waterways have been or are being diverted. Is this allowed and if so, how is it being monitored and who is responsible to monitor this?

… as residents in these affected areas we would like to have answers to some of these questions and be assured that the state, town council and all other responsible departments are aware and in control of this. Maybe you can initiate a dialogue with all concerned parties to discuss this. 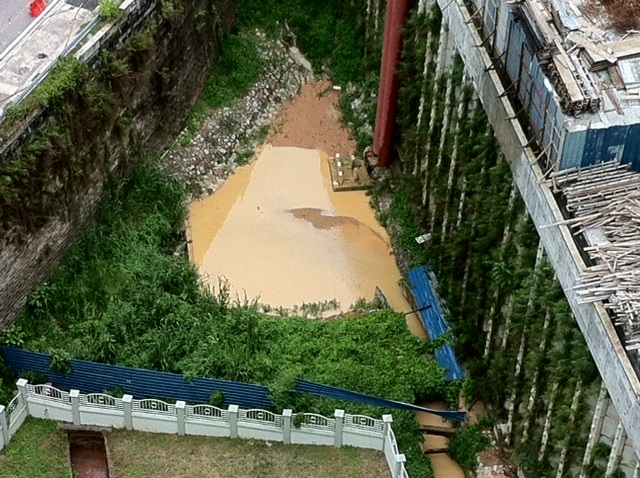 What happened to that hill-slope supervision committee of experts who were appointed not too long ago? Anyway, expect more such indicidents to occur as rampant property development under free-for-all capitalism collides with Nature’s stern response as climate change worsens.

This developer Ratu Mutiara should build the alternative road to Batu Ferringhi as they (are among those who) build the most property in this area and moreover now causing hazardous in Tanjung Bungah. Very irresponsible developer. Penang State Government should look into this serious matter and query should be raised to Ratu Mutiara.

Hi guys, I went to the location, and spoke to a few authority bodies. It looks like our island is much divided not only by owners but also by responsibility, Noting that at the end only the residents will be on the losing end. I am trying to get the people who is exposed to the risk and willing to participate in efforts to educate the residents, or community. Guys if u have any ideas on how to get this people pls keep me posted. it will mean a great deal. TQ

Get a geologist to find what caused the problem. Ask them to perform a back-analysis of the landslide. Detail soil investigation such as cohesion and internal angle of the soil should be carried out.

Capitalism conquers all. There is a lot of money to be made. If you are killed, your relatives will be paid something. This is now accepted internationally. Holland has just paid the widows of its massacre in Indonesia a few thousand Euros each.

I don’t understand why most people still still blaming the UMNO the apa pun bolih.
rajraman.Don’t the state government have the authority to stop work order until all requirement is fulfilled by developer?

Forever blame someone is a disease in people’s mind.Get a life blind supporter of State Government. and move on with life. I believe the state government also extra friendly towards the developer in the name of development.Push your state government to do works.

I am so happy this happened. In fact I would love to see a bigger one destroy all the houses, condos and any idiot(s) living there. Humans will never learn until something drastic (like the loss of hundreds of lives) happens. They knew the risks and the hazards and they wanted to buy property there and at the same time destroy the environment for everyone else. It is not as if they were not warned. There was even a protest in that area. They deserve what they get. So rain, please keep it coming.

Welcome to the BOLEH LAND. Its purely the ENGINEER decision to allow such steep slopes. Call the CONSULTING ENGINEER to explain… God bless Malaysia and ONLY IN MALAYSIA…

The engineer/contractor/architect/developers are there to make money and nothing else. You should know by now they don’t care about actual engineering, designing and least of all in maintaining the environment. The MPPP on the other hand are paid by Penangites to protect their interests and quality of life which includes protecting the environment. The fact that they approved such a projects means that either they are corrupt or stupid. If you ask me I think they are (allegedly) corrupt and also stupid.

This rock fall reminds us of 1998 massive landslide @ Moon City & Awana Apartment in Paya Terubong. Boulders bigger than a bus flattened vehicles, beautiful waterfalls emerged like Niagara Fall prior to the deadly landslide. But that alone didn’t weathered thro’ a heavy rainfall as we are now experiencing the past week.
Playing with the course of Nature’s water flow is asking for trouble. From the look of the pictures above, it is too similar a disaster layout of Moon City.

You can’t ignore the forces of nature i.e.
anthropogenic climate change a.k.a. effects of global warming

Who cares about ifs? Nowadays with all the stresses and high cost of living, we really couldn`t even care about ourselves let alone others. Let`s hope that the govt can and do really care. Even if the state govt really care they still has their hand tight with the Federal govt and minister and their UMNOputra having a free hand in grabbing whatever they can leaving crumbs for the people. Too bad change was not forthcoming despite the poor being poor and yet continue to support cheater, deceivers and robbers. Let us hope for the best within ourselves and hopefully… Read more »

Penang has definitely been taken over by the developers since 308. All these developments may have been approved by the Ostrich administration but there is reason why the current state government cannot impose stringent conditions and tighten enforcements.

The state government should build the highway to Hard Rock as soon as possible. The current winding route to Batu Ferringhi is a potential death trap especially when it rains.

Tanjung Bungah was truly popular bin chui district in the 60-70’s and may be early 80’s.

Under boh hoot admin, the pristine area started to degrade to present congested feelings ! No need to say more just review past uploads by anilnetto.com.

The road along Tanjung Bunga is becoming hazardous soon because of the risk of landslide?

You are right. But this new govt that was voted in with a supermajority by Penangites are not doing any better. The least they could do is to stop anymore new projects on the slopes and on the beach.

Angry seas, angry hills, angry residents of affected homes. The culture of Penang authorities is to wait till something happens or some fellas get angry & protest. But it often is too late like the lightning tower horror accident of unsafe building at Macalister Road. Where is the power of aduns to safeguard the interests & safety of their voters? Where is the concerns of state gomen to ensure that residents’ lives are not threatened due to uncontrolled, mindless, frenzy hill developments? It seems that Penang anywhere is not safe or liveable as long as developers have a free-for-all-kind of… Read more »