Residents of Kampung Bagan Ajam in Butterworth and Kampung Chubadak in KL are the latest folk to face eviction at the hands of developers.

In Kampung Bagan Ajam, some 120 households are affected: 47 have reportedly accepted the developers’ offer of compensation while 73 claim it is too low.

The residents reportedly say they have been offered compensation ranging from RM7000 to RM25000 each.

The developer is Tah Wah Group, which has bought up tracts of land on the mainland. Tah Wah had last year sponsored the RM350000 refurbishment of the Anjung Bagan recreational park under its corporate social responsibility programme.

Kampung Bagan Ajam lies close to the site of the entrance to the proposed tunnel on mainland Penang. Certainly, these residents will not be delighted with the tunnel.

Land in Butterworth presently averages close to RM100psf compared to fives times more on the island. Expect this gap to narrow with the state government adamant about the controversial tunnel.

Speculation in the area near the tunnel in Butterworth is bound to further propel property prices on the mainland even further.

Is this what they mean by the tunnel “opening up mainland Penang for development”? Development for whom?

In Kampung Chubadak, the defiant figure of 73-year-old grandmother Wahidah Md Salleh is now etched in folklore after she faced down bulldozers that were threatening to demolish her home. 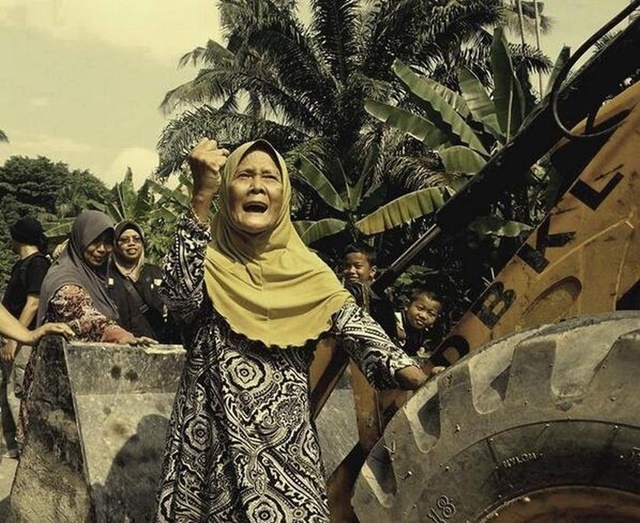 The land had been sold to a private developer while the villagers were awarded RM7000 for each family and a low-cost flat – though some complained that electricity had not yet been connected.

According to the Malay Mail:

In 1998, the Kuala Lumpur High Court decided that the land in Kg Chubadak belonged to the people who had started the village. The court added that if the area was to be developed the people must be compensated with an amount equal to the value of their settlement.

However by 2008, DBKL had listed down Kg Chubadak Tambahan as squatters’ settlement under the 2020 Kuala Lumpur City Plan, together with five other villages.

The Malay Mail also reported that “a Court of Appeal decision in 2000 had previously refuted claims that the villagers were squatters and trespassers, insisting that they occupied the land as licensees and with the consent of the state authority.”

Perhaps many of these problems arise because the whole concept of land ownership based on titles in a central register ignores the needs of those who have resided on the land for generations, sometimes entire well established communities. These resident are then cruelly termed “squatters”, when they are really pioneering settlers.

So we allow whole villages to be flattened and these established communities to be evicted with meagre compensation – and then we wonder why there is insufficient low-income housing, how the super-rich are getting wealthier, why household debt is rising, and why income inequality is so wide?

Quote from wong Chin Huat:
“If you evict people out of the land, who provides them with their livelihood?”

Another way of saying for CAT Deity,
if cancel all bing chui development, Komtar Tower Gomen of Cosmopolitan Penang Frenzied will get sued until the 2 pants drop.
Get it? This is their livelihood for another 4-year term.
Chi Kei Ku Chi Kei.

Data from Bank Negara indicates that Malaysia is seeing signs of a possible moderation in overall house prices. The growth in the Malaysian House Price Index (MHPI) declined to 9.6% in the fourth quarter of 2013, compared with 12.2% a year earlier. This was the first time since the third quarter of 2011 that the MHPI was below 10%, and the improvements were recorded across most states and most types of dwelling.

Take this cue from US – Student Debt Takes a Toll on Some Home Buyers http://online.wsj.com/articles/student-debt-takes-a-toll-on-some-home-buyers-1403305623?ru=yahoo?mod=yahoo_itp For those who think the Cosmopolitan Penang Frenzied Trendy future of which we are now treading precariously is all fine & good (for whom?), do pause to think for the present generation of young students & children who will most likely face what is now happening in Commercialized US. Indebtedness to student loans & other loans (like cars) will & can thwart any effort towards owning a decent home sold at surreal prices. This applies to the majority 99% who unwittingly follow the present… Read more »

You need to save about RM750/month @4.5% annual rate of return for 15 years to realise RM200K for your child’s tertiary education if you are not counting on PTPTN.

be street not book smart. learn the skills to ply trade on the streets. of course stay away from the temptation of illegal activites

How are we supposed to differentiate people who are squatters and people who are pioneering settlers. How many generations before we consider them legitimate settlers? Some families may have lived there for 5 generations, some 8, some 9. Where do we place the cut off point? Some may have lived there for 10 years, some for 50 years, other a 100 years? Which families should be considered pioneering settlers? What if the land they occupy had an owner from the start who was kind enough to allow them to live there rent free? Let us say I own a 10… Read more »

Read in kwong ming daily, an elderly couple finally has a roof over their heads, thanks to jagdeep singh and pg state govt !!!

Chinese newspapers have more reports on how the Pakatan government helps the poor community by addressing the daily bread & butter issues.

Yesterday the Majidee military camp in JB is officially closed after 73 years, and its prime land and the surrounding Kampung Majidee (traditional malay heartland of JB, like Kampng Baru in KL) is making way for the 330-acre mixed development township, known simply as Southkey (touted to be as big as Mid-Valley in KL!).

Does that mean that the malays are being displaced in the JB township?
Are they able to afford the condominiums sprouting out in their kampong land?
I bet it will become a social issue in time to come.

If you read UMNO’s controlled paper NST today, you will be aware that it;s happening even in JB whereby more condos in the pipeline displacing those who can’t afford the new lifestyle. Who says it’s only a happen phenomena in CAT’s land ??? http://www.nst.com.my/node/5058 A bigger concern for the Johor government is that the property boom in Iskandar could spawn discontent among the local population since the skyrocketing house prices seem to be out of their reach. Without the corresponding rise in the supply of “affordable” homes, Johoreans might find themselves being priced out of the medium- to high-end property… Read more »

Petition for tungkang to save Belum Forest and forget about Pandas……

The Belum-Temengor forest is one of the last refuges for several rare species and provides essential habitat not only for Malayan Tigers, Sumatran Rhinos, Asian Elephants and many other animals including the Malayan Tapir, Seladang, Malayan Sunbear, Sunda Pandolin and White-handed Gibbon. Stopping the deforestation of the Belum-Temengor rainforest habitat helps towards saving the Malayan Tiger and many other threatened species from extinction. Without vital intact, unfragmented areas of rainforest habitat these wild animals’ populations will continue to decline.

There will be influx of chinese from mainland China to make Malaysia their second home in Johor, and may alter the demographic pattern in time to come. This is the second coming of chinese immigrants that ISMA and Perkasa will make noise?

Interestingly enough, The Star reported on Saturday that the real estate landscape in Johor will be ‘stormy’ with the booming presence of developers from China, who are expected to adopt ‘carpet bombing’ kind of development.

Not sure how much old kampungs (and homes) will have to make way for such development once the land is sold to the China developers. Not sure how many old villages will fall victim to the ‘carpet bombing’ redevelopment.

The big storm will certainly transform the landscape of Johor Bahru.

Is there any HOPSCA concept living in Penang?

No Money, No Talk. Got Wealth of Money, Can Do Anything. This is the daily mantra of CAT Deity of Komtar Tower of Cosmopolitan Frenzied. Got MercS300Lansi, the sting of wealth building for the rich-not-enough is too overwhelming to use his once upon a time socialist sandiwara. Where is the Local Plan? Where is the blueprint to develop Penang with a wider all encompassing vision? Anything affecting the have-nots can happen for as long as the missing Plan is unaccounted for, notwithstanding the BM translation excuses just to buy more gambled time for developers’ frenzied pursuits. To say this is… Read more »

to overcome the CATphobia, go drink a certain brand (if u watch world cup u will know the brand so i cannot advertise on anilnetto.com) and if u r lucky u can become Jutawan then no worry about buying new strait quay home and replacing 4WD with kereta lagi canggih.

otherwise, best to release your frustrations by channeling the energy + to make sketches of old penang building and make tidy profts selling them to tourists eg at Transformers Paragon.

ApaLapala. Too prematuristic of your point of view to the extend you believe it’s a phobia in my criticism of something gone wayward since 308. Can’t accept democratic of criticism?
May I suggest you go to Carnarvon Street or Kimberley Street & get yourself some joss sticks to enhance your worshipping of CAT regardless of any misstep in state administration. Maybe you will get a lucky 4-ekor!!!
Or how about getting a Lucky Cat statue with waving paw for your front door?

Bagan Ajam is the next frontier that housing developers will conquer?

Tunglang expect state government to print money. His kopi o kau works wonder. Even with resources, he thinks the state is rich with money if there is no one willing to dump his money to invest and ROI to see if it is worth to put his money. He does not mind the taxes and gst gerakan bn federal is proposed to raised. His kopi o kau make him unable to see without investors, Singapore will be begging gerakan bn feferal goverment to accept back to Malaysia after breaking away.

A free for all kinds of cosmopolitan frenzies no matter what at the expense of local Penangites, the majority of whom are in the class of No Money, No Talk. This is acceptable to those who solely think, worship & pray for $$$ in the same vein as CAT Deity to make things happen (for the sake of political showcase to prove to the Feds) regardless of the socio-economic consequences, regardless of pre-308 holy-preaching of social equality & environmental stewardship. That’s wholesomely possible for those like cw’f’ who frequents the riverside of Sg.Pinang for a cuppa of CAT Black Tea.… Read more »

Tunglang thinks mercs is bigger than bullock cart wheel. Why not ask bullock cart to be back. Gerakan bn has do many blue print on 1malaysia. What happen then. Blue print but no $£€¥ what is the use. Gerakan bn federal government wanted kidex even it is not in pj blue print.