Among the victims of the Bukit Kukus landslide tragedy on 19 October was a cat, which succumbed a couple of days after being pulled out of from mounds of fallen earth and rocks. This morning, a group of environmentally conscious Penangites gathered across the road from Penang State Assembly and used the dead cat as a metaphor to mourn the demise of competence, accountability and transparency (CAT) in the state.

The protesters said the demise of CAT has allowed all sorts of unsustainable ‘development’ plans to be approved in the state. They expressed alarm at the latest manifestation of the state’s obsession with such plans: the much criticised proposal for two hotels on the summit of Penang Hill.

The state government is fully aware of the problems in building here: forest reserves, restrictions under the Penang Hill special area plan, plans for a Unesco biosphere listing, about 200 landslides in the area in recent times. So why ask for trouble and go ahead? Who are the those behind this money-making scheme?

Notice all those landslides in the area of the two proposed hotels:

Flash back to an earlier landslide in Paya Terubong in 1998: 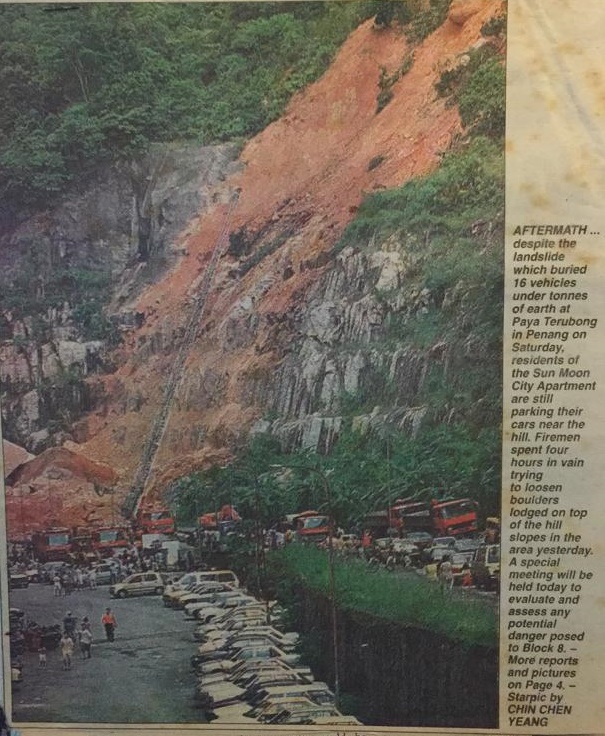 Look how fast they forget what they said 20 years ago in the aftermath of that landslide: 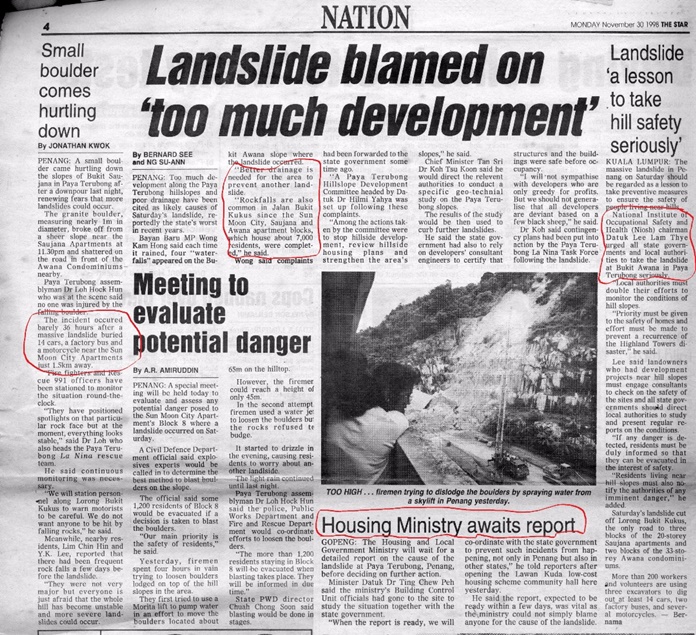 And pay close attention to what the present Penang chief minister said in 1998, when in opposition:

Thanks to those who dug out these newspaper cuttings to refresh our short memories. But we never learn from the lessons of the past, do we?

The protesters today also slammed plans for an additional 7,700 acres of new land reclamation, which has been included in the revised Penang Structure Plan 2030 – on top of the Gurney Drive/Tanjong Tokong reclamation. The scale of this land reclamation puts the massive Forest City project in Johor in the shade. But where are the buyers of all these high-end homes coming from?

These massive land reclamation plans are based on an inflated Penang population estimate of over 2.4 million for 2030, which ‘development’-obsessed Penang is projecting in the structure plan. This is well above the projection by the Department of Statistics, the real experts in population projections, which forecasts 1.9 million for 2030, only marginally up from the present 1.7 million.

Anything for more high-end property development.

One protester said the Penang government has apparently not heard of climate change (or if it has, is content to pay lip service to it, if at all). Instead it is pursuing a business-as-usual model, never mind the consequences ie floods, landslides, depleting marine fish resources.

The cat did not die in vain.

Later someone may set up a shrine in memory of its untimely sudden passing.

Just to make sure the cat shrine does not become focal point requesting for 4D lucky no.
RIP

The cat did not die in vain – an omen that CAT is still arrogant in perpetual denial of its waywardness of wilful or perverse behaviour. The day may come when CAT Gomen is ‘hapus’ & another shrine build in mockery of its 9-lives adventurism failure.

Kyoto in Japan has Inari shrine for Fox.

Penang can have Cat shrine to attract tourists.

If cat shrine in peng land, kuching city will sue peng land until the pants drop for copy cat and copy right.

This is the most despicable, arrogant & irresponsible state gomen in the entire history of Pulo Pinang. Despite calamities & tragedies in hill development, CAT Gomen led by … CM Chow Chow acts as if it has the moratorium to stop listening to the outcry of many concerned Penangites, forgetting that they are voted by the people for the people & not to act like b…. (Anil pls don’t censor). In fact, it has not learnt a thing but continued in the pursuit of insane development. The hunger for insanity has no match, not even Forest City. Tonight, it suddenly… Read more »

Same with talkers here. They want cheap one ton mee. The owner, his wife of hawker stall orso want 1.8k per month. Many hawkers are aged 60s and above. Don’t be chipskate. Pay them so they have money for retirement, holidays or to spend in old folk home

Pointless, vote them out.

That YB that deceived his constituency should be dropped.

you mean the pathetic 1% is going to vote the existing government out..? hehe

Why change of mood? Niao Kong in Putrajaya must be fuming mad with you!
Shrieking: “Don’t forget Komtar Dedak, you ungrateful!”

The CAT was long dead, way before the GE14. The Tokong only preached CAT never practiced it at all. The question that we need to ponder is why the DAP regime is so intent on bulldozing its way and insisting on the PTMP and PIL1 despite the opposition, the exorbitant cost and a lack of benefits / ROI. This is not due to its obsession with development as Anil says. But this is more to do with (allegedly) wanting to reward cronies and supporters and to ensure the party coffers are full. There is no other reasons. You may recall… Read more »

What is the chance of Andy Yong becoming the new Gerakan chief?

CS is not gila man. He is dumno man. One reason for highway is to increase the productivity of peng land. Imagine, how much wear and tear due to stop and go and peng lang has to send to workshop? How much time the lower income has to stand in the buses?

Penang govt allocates RM120 million to strengthen hillslopes https://malaysia.yahoo.com/news/penang-govt-allocates-rm120-million-121335261.html Thro’ sheer incompetence of planning & monitoring, stupidity of tango with developers & greed for unsustainable hill development, Pg CAT gomen now has to wastefully spend such big sum of public money to mitigate hill slope problems brought about by developers, whom by law should fix them. Imagine what opportunity costs from such money that can bring more meaningful benefits to Penangites rather than fixing such problems which will multiple in the coming years due to continuous incompetency, stupidity & greed of Pg CAT Gomen, the latest being the 2 hill… Read more »

Reclaim from sea, orso protest. So has to go to the hills

Read this to understand why we protest against insane development onslaught: NGOs to continue protests against Penang’s hillslope, mega projects https://malaysia.yahoo.com/news/ngos-continue-protests-against-penang-045508004.html GEORGE TOWN: Environmental non-governmental organisations (NGOs) have vowed to continue staging protests against the Penang government if it pushes ahead with hillslope developments and mega infrastructure projects in the state. They also reminded Chief Minister Chow Kon Yeow’s administration of former chief minister Tun Dr Lim Chong Eu’s ‘fall from grace’ in the 1990 general election when he expressed his intention to push for the development of Penang Hill. Penang Forum committee member Khoo Salma Nasution said they will… Read more »

Move airport into the sea or Perak, Kedah and airfield use whatever peng land want to build

Same group of 20-30 familiar faces usually protest, no different from those Umno fellows protesting at Komtar.

I suggest they charter a bus to protest venue instead of each driving own cars to reduce carbon emission.

The PH government did not introduce capital gains tax on shares and other taxes on the wealthy in order to prevent capital flight from Malaysia, said Lim Guan Eng.

The Finance Minister said that such a move would be a “shock to the system”, which would hinder Malaysia’s fiscal and financial recovery.

Penang wants to ban the import of e-waste and post-consumer plastic waste to control the waste-processing industry and protect the environment and people’s health.

State environment exco Phee Boon Poh said Penang has to say no to municipal wastes from outside as there were already more than 200 factories processing recycled plastic illegally in the state.

What about waste from buses, cars that stop and go due to traffic jam?

In the language of the religion of capitalism, this is called monetising a resource, developing a market, creating/wealth/development/jobs, etc. In USA, since the masses who are destitute cannot contribute to “corporate” profit, the system is designed to entrap them into private prisons. They also work for a pittance or no pay, and subsequently become disenfranchised, stigmatised outcastes.

Here, we still have green areas. The logging alone is a bonanza. We only have about 50% forest cover: this means that the vast interior of West and East Bolehland is riddled with red gashes, evidence of criminal greed.

I sympathise with the wildlife which cannot go elsewhere as development encroaches & destroys their territories in the wild. In Sg. Rui rainforest (between Kedah + Perak) where one campsite I used to 4WD there for nature escape + offroad challenges in the early 2000s, there was a salt like nearby to a pristine 25 ft wide river where rusa, wild pigs, tigers & other wildlife came for their nightly rendezvous of licking mineral salt energy. Some years later, I went back to the same camp site & to my disappointment, the entire place was desolated, not even an undergrowth… Read more »

So tunglang watches how the tiger roar in the jungle but unable to compete with the cat of the jungle, tunglang come and roar hear?? Lucky can find tracks in the jungle? Used by elephants or lumberjacks? Opportunist no complain when lumberjacks build highways in jungle

So, what’s your problem? Living a boring life shrieking?

You have a good tine here roaring like the CAT? Belum valley too many cats?

How about relocating tigers from Pahang jungles to Belum (or reviving Tiger Park in Penang) before Musa King took o er their natural habitat?

No harimau, how to ‘mengaum’ as Asian Tiger?

Alas! My Penang! Too bezutiful for yor own good.

with all its bare and naked terrain, not only it is beautiful , it is sexy now..hehe

Now, we know who likes to rape & murder the virgin hills & still hehe!

So you can live in a condo as you do not want to stay in tree tops.

Confrontation like dalunfa vs CCP. Miss opportunities. When build highways, go and extract concessions like better landscaping, bicycle lanes a MUST. Viewing posts, boardwalk to scenic waterfalls and streams and crossings for fuana. This case win-win for all instead too influence by run lang

I thought you like wide-wider highways with all the shrieking cars! What came over you with talks of waterfalls, streams & faunas.
Anyway, you would have learnt more of these nature’s gifts from the Bunians IF ONLY you are brave to meet them! Even if it’s a one-way ticket!

Need wider highway unlike you can roar with your 4wd. Why not give yourself one way ticket since you love and is a gift to you? Instead why give others one way and not yourself?