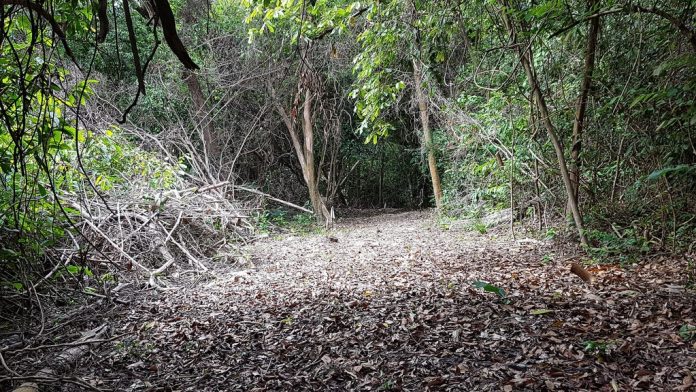 Someone has cleared a trail that is 10-12 feet wide along the northeastern coast of Penang. 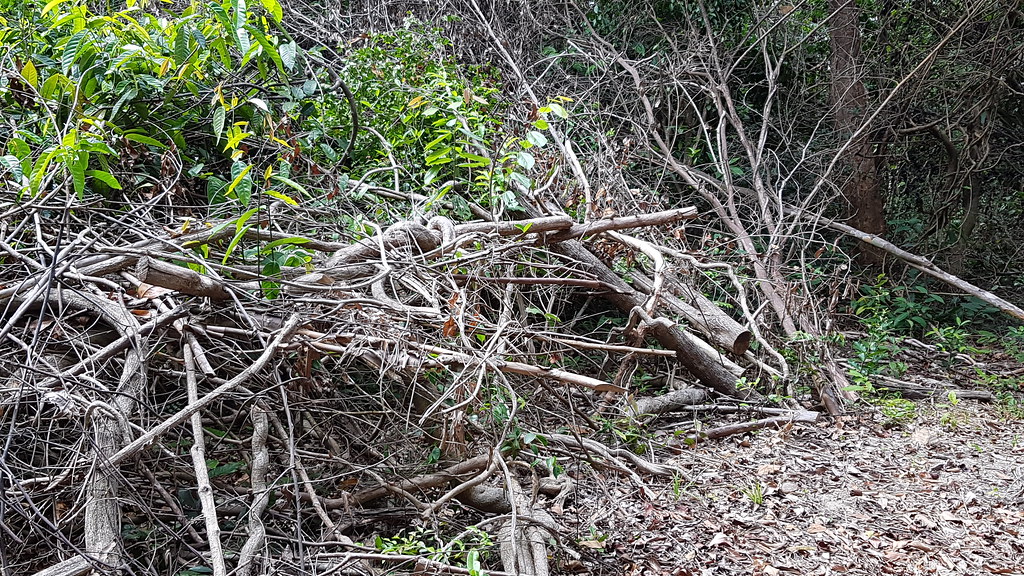 Part of the trail, plotted using GPS on the map below, is close to 400 metres long. 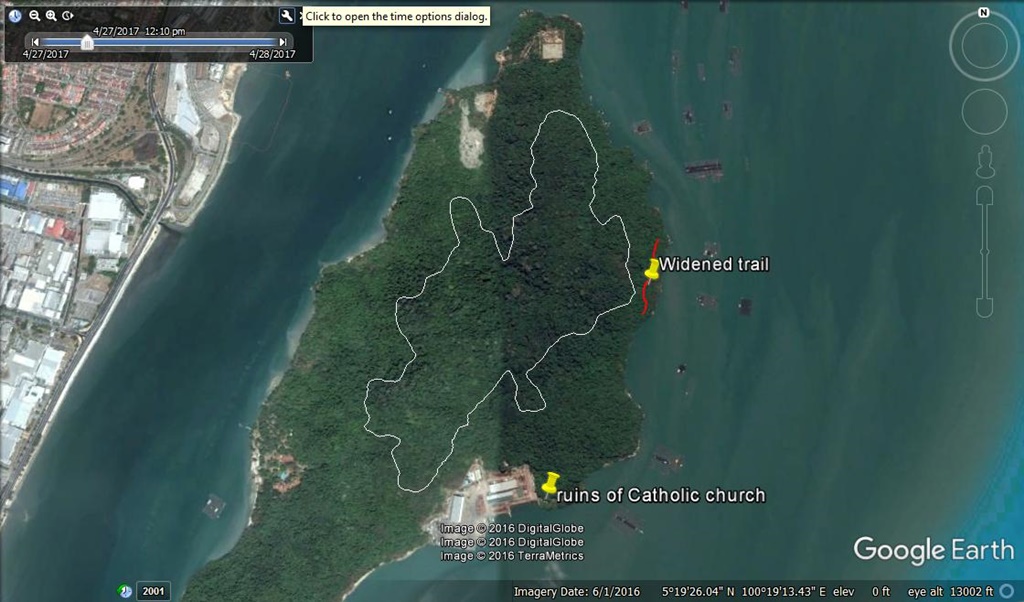 But it appears to extend further north as well (not plotted below). This clearing is probably not visible from the air or drone photography because it is blocked from view by the cover of trees beyond the edge of the cleared trail.

A fisherman said workers armed with a chainsaw and machetes were spotted on the island “dari bulan dua” (February 2017) onwards. 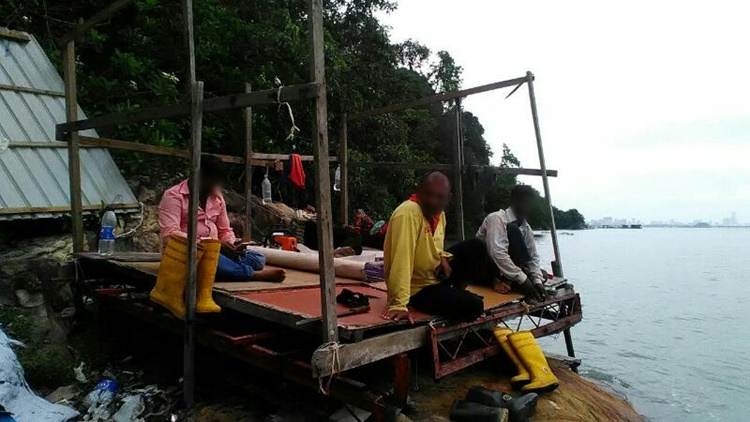 But they stopped coming in early April, he said, presumably after the clearing was publicised in the local media around the time of Penang Forum 7: #SaveJerejak.

From the fairly fresh surfaces of the stumps on the ground, you can see that the path appears to have been recently cleared. 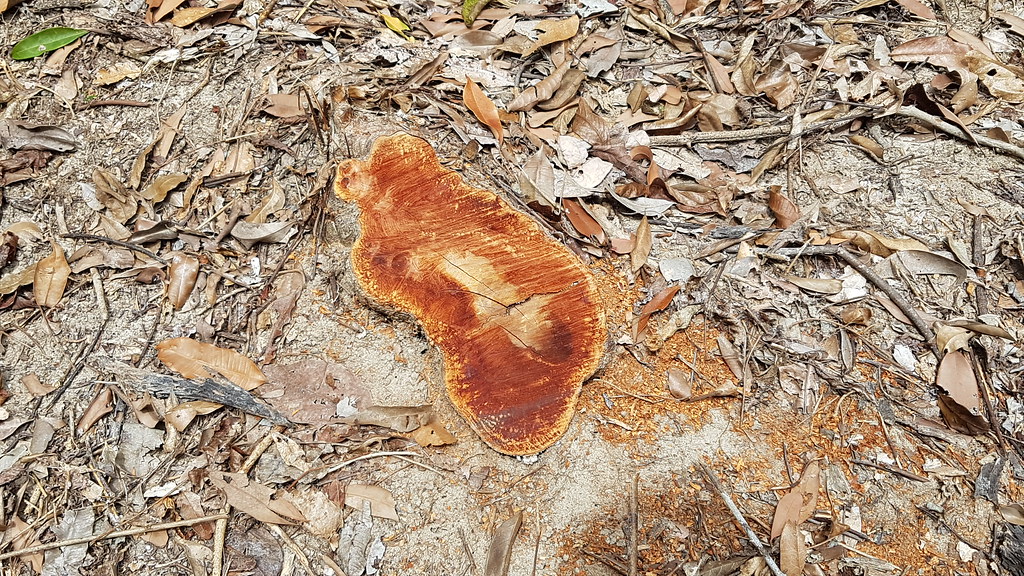 Also the dried brown leaves have not yet fallen off the branches of chopped tree trunks, lying here and there at the edge of the trail. 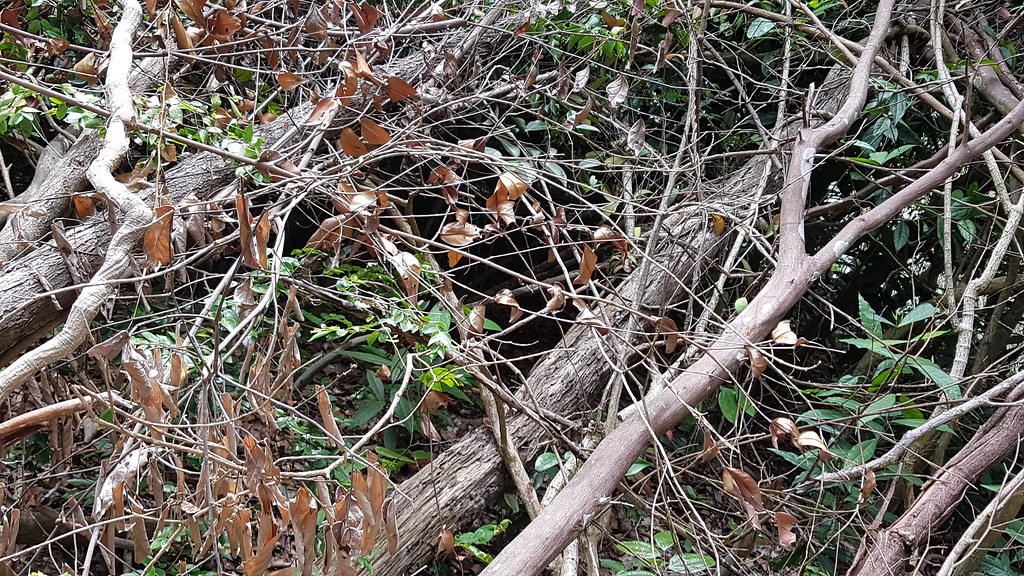 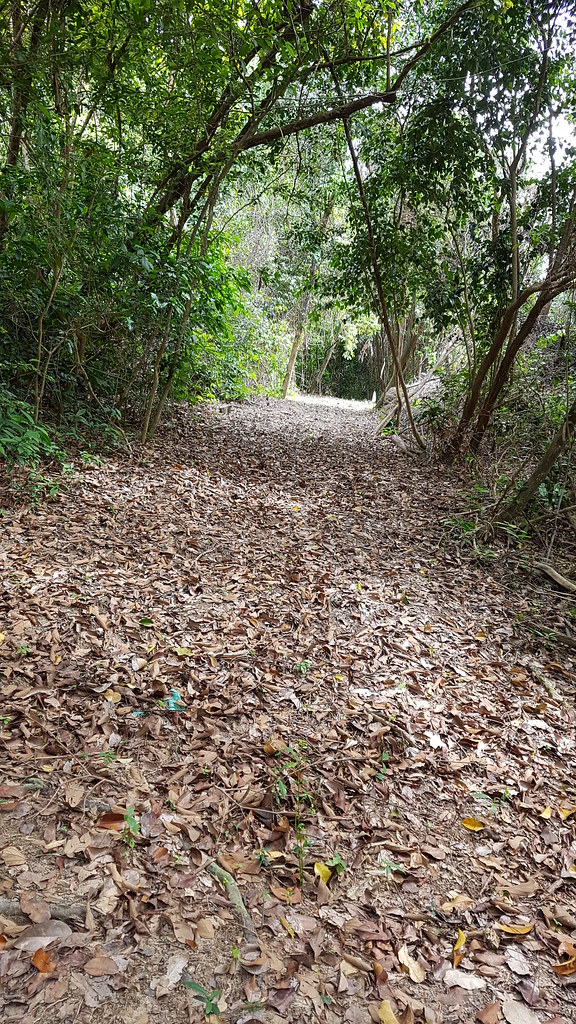 Although plans were announced earlier for a round-the-island bicycle track, this cleared trail, complete with boundary markers (little sticks on the ground with plastic flags)… 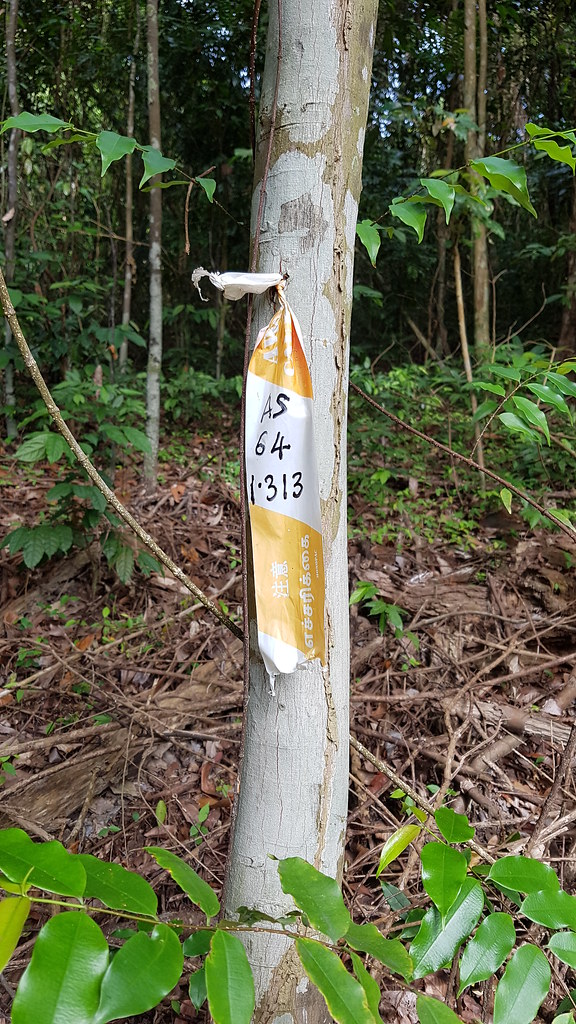 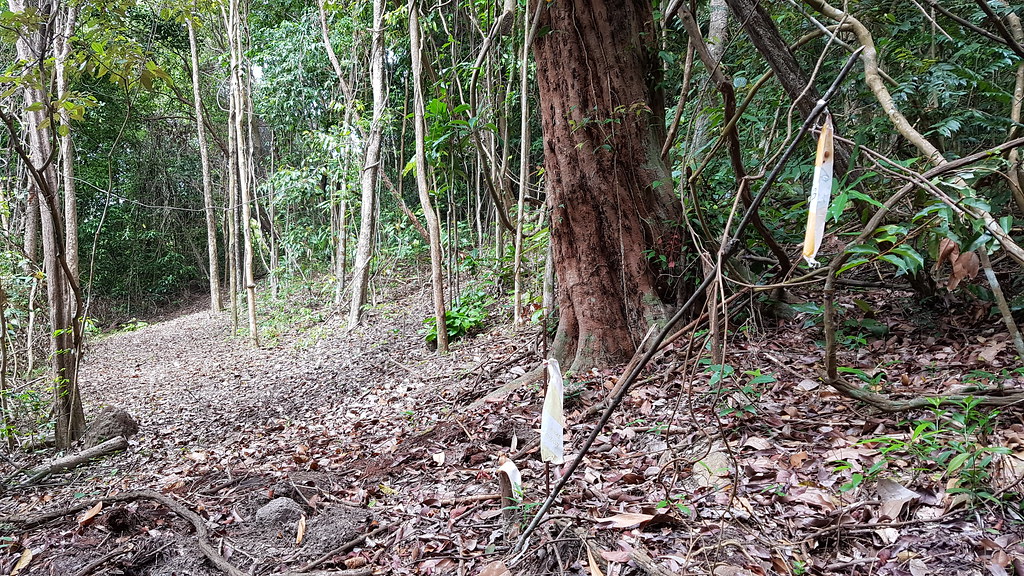 … appears too steep in parts and the ground too undulating for it to be a comfortable bicycle route. 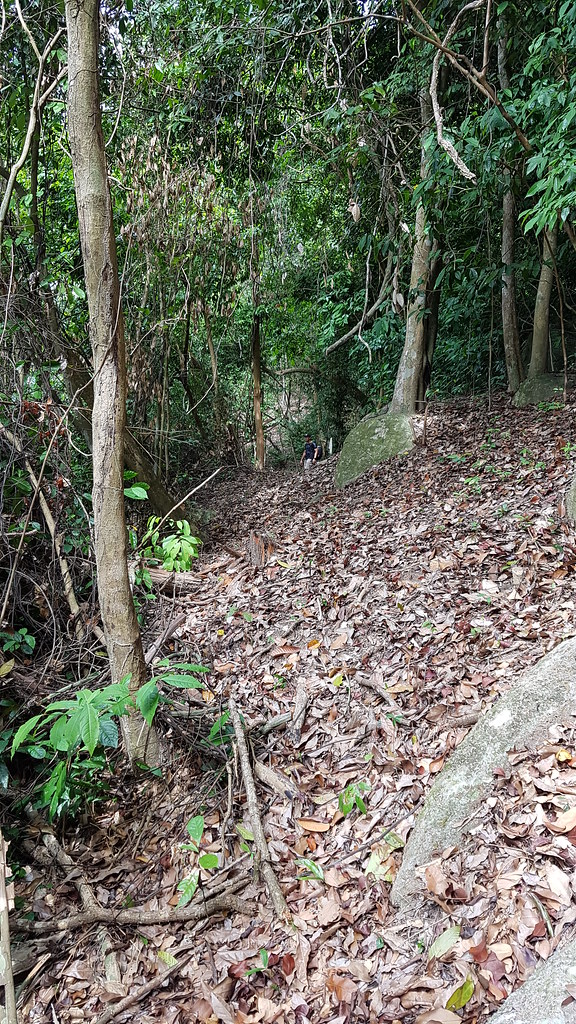 The fisherman said he had heard talk of a motocross track, though that is hard to verify. 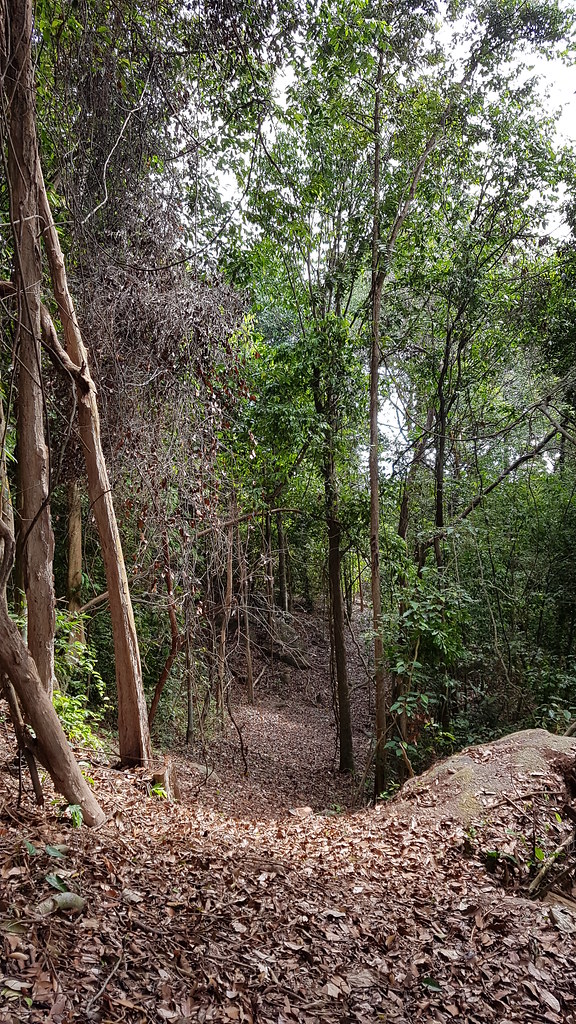 So what is going on here?

Examine all these photos and see what you think the clearing is for.

Incidentally, the fisherman I spoke to said that the monthly earnings of fisher folk in the area have tumbled from RM3,000-4,000 in the past – when they could catch plentiful and much sought after fish like grouper – to just RM800.

He suggested that the dwindling catch could be due to nearby land reclamation, the second Penang bridge construction, and overfishing by the thousands of leisure fishing enthusiasts in the state.

Meanwhile, a group of concerned residents of Penang and beyond are calling for a day of prayer and meditation tomorrow, Sunday for the protection of Pulau Jerejak.

Penang Forum can learn from Toddycats of Singapore:

Not all theme parks last forever. Memories of Mimaland: Abandoned for over 20 years, M’sia’s first theme park still draws visitors – some, for all the wrong reasons https://sg.news.yahoo.com/memories-mimaland-abandoned-over-20-083353472.html Malaysia In Miniature Land, popularly known as Mimaland, was arguably Malaysia’s first theme park – and drew an endless stream of visitors every year. Located near Kampung Batu 12 in Ulu Gombak, the park opened its doors in 1975 and drew huge crowds to attractions that ranged from realistic dinosaur figures to fun water slides. But a series of technical and safety issues brought the fun to a stop in the… Read more »

Mimaland was famous even b4 Jurassic Park or Walking with Dinosaurs movies. The kids of that era now all grown ups, and can take their children to Komtar Top Jurassic Tour and recall the memories of the past.

It’ll be awesome if condo will be built and then bridge….Penang will be awesome. They need to move the shipyard elsewhere though.

Double talk . They are hell bend to develop pj.

Why don’t we just get a straight answer from the authorities?

You can follow the stunts of Jamal Yunos, show up at Jerejak with media alert to get coverage over TV, Newspapers, electronic social media for example, Penang Forumers can stage round the island walkathon funded by concerned folks, with live streaming on anilnetto.com.
Surely the next day you can get the response from Komtar 🙂

Penang Forum can hire a helicopter and get reporters to fly over Jerejak to see the damage – an effective way just like what Jamal had done to expose expensive home of PKR youth.

Sunday 30 April Healing Energy Prayer for Pulau Jerejak and more… A worldwide event! We will all stand as a Rock for the Penangites and their Pulau Jerejak. A beautiful, historical Island needs to keep the peacefullness! A simple Universal prayer, an easy way to connect with your Source and get results that will surprise and delight you. Sit together if possible, use OPONOPONO. Focus your intention on Pulau Jerejak. The energy you will create will be powerful. Just use this simple prayer for Pulau Jerejak and more. I love you I’m sorry Forgive me Thank you. ~~~~~~~~~~ The flower… Read more »

PENANG, November 10, 2010 (AFP) – Overfishing in Southeast Asian seas has left garoupas and sea bass in dire straits, searching for mates on denuded seabeds, according to experts alarmed by ever-declining catches. Marine scientists and fishermen say that popular fish species — especially the large and valuable ones — have been caught indiscriminately, causing numbers to plunge dramatically. For big fish “finding a mate is a difficult task. They have to swim a long distance to find one,” said Edward Allison from the World Fish Center in Malaysia’s northern resort island of Penang. One of the culprits is bottom… Read more »

FISH and prawn fry were released into the sea at Tanjung Asam, Gertak Sanggul in Penang, in a move to boost the state’s food supply. Aquaculture company Global Agro Life Sdn Bhd let go 500,000 prawn and 40,000 fish fry and has pledged to eventually release two million fish and prawn fry into the sea around Penang. The fish fry comprise sea bass (siakap in Malay) and red snapper (ikan merah), both popularly consumed at Chinese restaurants, hotels and tomyam food stalls. Local villagers and fishermen flocked to the beach yesterday to see the bounty going into the sea. Some… Read more »