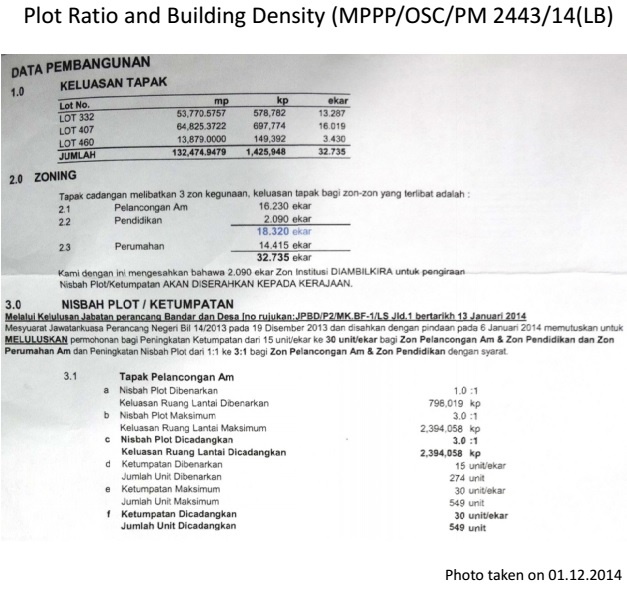 The document, photographed at the MPPP by one of the residents, shows that the State Planning Committee apparently approved (subject to conditions) an increase in building densities in January 2014.

Similarly, the plot ratio (for commercial property) was increased from 1:1 to 3:1 for the tourism and educational zones.

This doubling and tripling of densities will effectively turn laid-back Batu Ferringhi, at one time famed for its lovely beaches and relaxed rustic setting, into a stress-inviting ‘primary development corridor’. (Tanjung Bungah is facing a similar fate.) 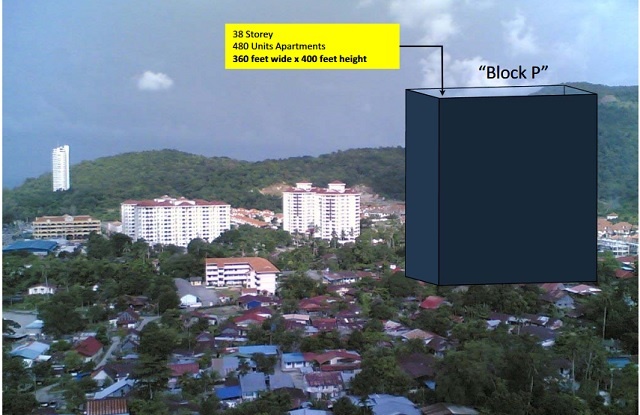 The law allows for the Structure Plan to be reviewed five years later. So the review process began in 2012, five years after the Plan was gazetted, and the entire review process was expected to be completed by the end of 2013. Apparently, the review has apparently overshot the target for completion – perhaps bogged down by all sorts of requests for changes?

To amend a Structure Plan, the Town and Country Planning Act stipulates a certain statutory procedure:

Presumably, there is a reason for this procedure: so that the local planning authority cannot arbitrarily change permissible densities at the whims and fancies of those with vested interests and cause infrastructural bottlenecks.

Clearly, the state government and the MPPP owe the public an explanation.

Meanwhile, the more detailed and specific Penang Island Local Plan, approved in 2008, continues to be Missing In Action (not yet displayed for public feedback and gazetted).

Excluding the hotel and the plaza, total proposed units is 1461. With 30 units per acres, you need a land size of minimum 48.7 acres. If the letter is related to the proposed projects, then the land size is too small to meet the requirements of 48.7 acres. This will be the justification for suing the state government even if you can’t reduce the development density to 15 units per acres. Someone purposely want to divert your attention by revealing that the development density will be 30 when actually it is more than 40 or about 44. If consider suing… Read more »

Congratulations to George Town for getting the City status, finally!

Thanks Peter for clarifying. The article is inaccurate and misleading.

Well, maybe the MPPP and the state government should be the ones explaining to the residents of Batu Ferringhi how a density of 30 units per acre and 3:1 was approved. If it is really allowed under existing guidelines, the planning authorities could have quoted chapter and verse to the unhappy residents.

Have they? If not, why not?

Low cost building free to BATU FERINGGHi resident but parking price is RM 38 000.00 only . Is that really parking price or that free house price. Because sure all have vehicle force to buy parking because if no parking park car near road side then mppp give saman. It’s a plan . Very bad why government approved this kind of plan . BATU FERINGGHi resident hate this kind of work .

Anil, you keep repeating “doubling or tripling” of densities. How can there be any doubling if the ‘maximum’ had already been stipulated from the outset? If the developer pays Development Charge [these days it’s RM15 psf, RM21 psf, for residential and commercial respectively] for that extra over what’s under ‘permissible’, he gets to build to the maximum. It is double what’s allowed under ‘permissible’. This is the only doubling. This mechanism had been built into plot ratio control from at least 1980. Not something that happened recently. My analogy about buying the car was only to try explain that it’s… Read more »

What is your source for saying “it had always been 15 to a maximum of 30”? Could you refer me to the relevant official document, which page etc? My own source has checked the Penang Structure Plan and found that it states that the density for the area is 6 units for perumahan ketumpatan rendah (low-density housing) and 15 units for perumahan am (public housing), and the plot ratio (for commercial buildings) is 1:1. This can only be changed by a gazetted review of the structure plan, which is still pending. (The Structure Plan also states that nature such as… Read more »

You’ll note guidelines on Development Charge [Infrastructure] were in effect from at least 28-8-80.

There is some misunderstanding here. “Permissible” density [for residential], fixed at 15 units per acre or plot ratio, [for commercial or institutional] at 1:1, may be raised to the “maximum” of 30 units or 3:1, with payment of Development Charge [Infrastructure]. There has been no surreptitious upping of the permitted parameters. These are standard planning terms in MPPP.

I’m merely pointing out the error in this reporting, not condoning the despoilation of Penang.

The thrust of this post is, how were the increases in density approved? If what you say is accurate, then what’s the point of limiting the permissible densities in the structure plan, when you can easily double or triple it by paying a development charge?

This matter regarding payment of Development Charge [Infrastructure] is built into density and plot ratio control. In effect, we should be talking about “maximum”, rather than “permissible”. In other words, the real cap is on the “maximum”, not “permissible”. Has been for decades. What I’m saying is, there has been no “increase”. It’s always been 15, up to a limit of 30 units per acre. It’s like when we buy a car. If we want an added feature, we have to pay more. The development charge is supposed, in theory, to be paying towards improving infrastructure, because the supposed “bonus”… Read more »

The development charge is hardly enough to cover the increase supporting infrastructure required for a doubling or tripling of densities. This is way different from buying a new car.

While Batu Ferringhians are so concerned about the environment, the Malaysians at large are monitoring the backlash of 1MDB scandal on Najib right now. Najib is in Korea right now and the internet (Anil will surely pick up on this a matter of time) is abuzz with some UMNO leaders going to discredit Najib internally for the corridor of power in Bolehland ?

I hope this blog can feature more articles on the importance of moderation in the Malaysian society.

I will try, Siti. Thanks for the suggestion.

DAP…? Well, they are becoming more and more unreliable?

Interesting new development as the Penang’s Umno Batu Kawan division leader D
Khairuddin Abu Hassan lodged a police report against 1MDB over the alleged mismanagement of its finances. Perhaps he has read this blog and decided to do something?

This is just another sandiwara from Umno.

Awang, i will pick your comment and send to cm to tell him he can do better. Tq bro and best wishes always !

Small issues mah, can fore-play mah.
Like what happened to Madame Pykett, a dirty work of a KL developer.
When there is a will to circumvent established laws, these recalcitrants (developers & authorities sama-sama) will find a loop-hole.
Kee, is right in one sense – Penangites are STUPID.

How did it happen. Its obvious that the DAP CAT govt have been doing thing behind our back. Just like a 72k LMC house sold for 240k and not allotted according to the state housing list.

Land size is a constant (unless more reclamation) but population is rising, so density will increase accordingly regardless of which government.

Building more high-end properties (to meet ‘speculated’ population demand???) but which stay empty for months or years waiting for secondary buyers but nice for hungry ghosts is not the solution for genuine home buyers. Don’t tell us it’s free Laissez-faire market forces, even the evil forces can be overcome by timely divine intervention. Increase in population is only a lame excuse to build more anywhere, anyhow, anytime BUT without proper planning except to fulfil property gurus loud-speaker propagation in 8 star hotel ballroom. Frantic knee-jerk demand caused by surreal property price hikes caused by speculation, dizzy development, chaotic traffic &… Read more »