Beverly Heights Properties Sdn Bhd is believed to have acquired the Pepper Estate land, on which stand close to 300 households. Who owns the firm? 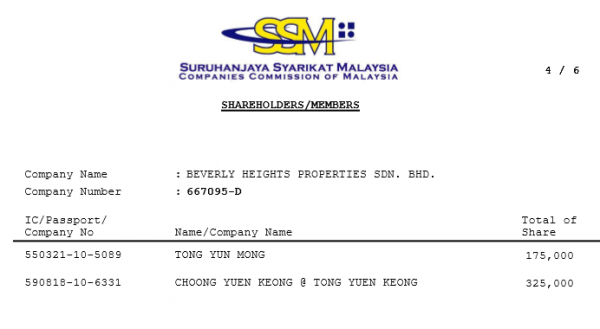 According to Bloomberg, Businessweek:

Dato’ Choong Yuen Keong @ Tong Yuen Keong has 25 years of extensive working experience in the construction and property development industry, which includes 11 years in construction site management and over 18 years in management of property development. Dato’ Choong is O” (Ordinary) Level or equivalent to Sijil Pelajaran Malaysia. He is a businessman by profession and owns several businesses involving in property development management and aluminium recycling. He was involved in a few housing and commercial development projects including Taman Maju Jaya, a pioneer landmark project in Cheras, Wisma Cheong Hin along Jalan Pudu, Pusat Perdagangan Tasik Perdana and most recently, Beverly Heights, located in Ulu Kelang, Gombak. He has been an Executive Director of Euro Holdings Bhd since February 29, 2012. Dato’ Choong served as a Non-Executive Director of Euro Holdings Bhd from April 24, 2007 to February 29, 2012. He is a Malaysian.

The Euro Holdings Bhd Annual Report 2012 says he has spearheaded the Beverly Heights project in Gombak since 2003 and is now venturing “into a similar prestigious project in Penang which offers state-of- the-art living conditions, characterized by ultra-modern facilities”.

Bloomberg describes Yun Mong Tong (I am guessing he is the same person as the other shareholder above) as follows:

He has since resigned as director of Hexagon Holdings.

Hopefully, the developer and the residents of Pepper Estate will be able to arrive at a fair and just resolution.

Yang, your 9.55am comment makes some interesting points. Development Property companies do not have to, in law provide any compensation to those Malaysian Citizens they want removed from their land. However I would suggest that (even in their own self-interest in terms of looking like the good guys) they have a good hard look at what is termed natural justice. Natural justice covers those aspects of living like: having adequate shelter, enjoying open spaces, sharing laughter,sadness, joy and pain with friends and neighbours, being close to work and market, safe drinking water… All these things are, in the year 2013… Read more »

Those who commute in taxis will have to dig deeper into their pockets as the Land Public Transport Commission (Spad) plans to hike taxi fare rates.

Have I not told everyone before the election. I think it could fill pages

Thank you for your reminder.

No wonder my letters to my European friends could not reach them when I pasted the old rate of RM1.60 postage. Pos Malaysia never update people the change!

Who own Beverly Hill properties should not be too much of a concern as long as the Pepper Estate residents were given proper compensation. Legally the owner have the right not to pay any compensation. The residents should take note of their position and not be too greedy like the 9 residents of KB Pala who were given 200k houses on the mainland using govt fund which means it is OUR yes OUR money. Yes OUR MONEY and thats very disgusting when I think of it. I will as usual puke … The 15 or so KBP residents that accepted… Read more »

Barang Naik after GE13 is happening…

ps: Anil could help to update the list for public awareness…

Express Bus from Butterwoth to Alor Setar (return trip now RM16.60, was RM15).
The conductor told me its Harga Mukritz.
You can figure that out.

There is another state of art development of Detached Bungalow along the Jalan Utama near to the Moral & Uplifting Society. It cost 14 million each