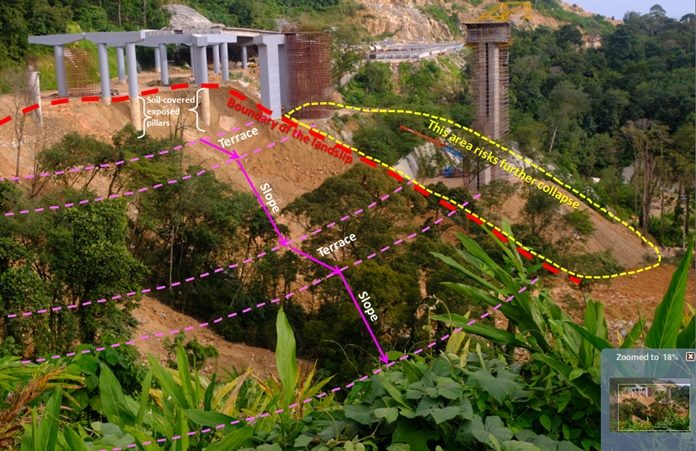 Another statement from Penang Forum:

It is with great sadness that Penang Forum is issuing this press statement about the Bukit Kukus landslide tragedy.

On Friday, 19 October 2018 innocent lives were lost, workers who had left their homes and families to make a living in our country, to build our roads under dangerous conditions.

Shame on us if we care any less because they are not Malaysians. Shame on politicians who were quick to blame the rain and ‘inadequate’ laws and showed little to no remorse when so much could have been done to prevent this tragic loss of lives.

Over the last few days, the entire nation has read and heard shocking revelations about the authorities’ appalling lack of ability to enforce existing laws and monitor construction sites.

A few highly alarming issues must be highlighted:

1. This is a Penang Island City Council (MBPP) project. Responsibility lies squarely and fully on its shoulders. Will it hold an independent and transparent commission of inquiry? Hard questions must be asked. Was there an environmental impact assessment for the project? Were the conditions followed? Were the safety guidelines of the state and MBPP followed? Who are the consultant engineers and were they doing their job?

2. As mentioned in the press, laws requiring soil erosion mitigation work were not enforced and mitigation was not carried out by the contractors on this MBPP project. This includes the overflowing stream

3. Just a week before the landslide, a stop-work order was issued on 13 October 2018 following a massive ‘site mishap’ – which saw 11 concrete columns, each measuring 25 metres long, fall from the very same elevated highway construction. Yet work continued undetected till the Department of Occupational Safety and Health called in on the contractor on 17 October. Work only ceased because of rain on the morning of the 19 October. The collapse occurred that very afternoon.

According to the press, the contractor said, “I was confused by the order.” He also claimed the dead and missing workers were not his. After the first mishap, did the authorities make a concerted action to ensure the safety of the site?

4. Penang Forum and Penang Hills Watch had alerted the authorities twice through written reports of their analysis and urged for caution on the hill slope of the construction site at Bukit Kukus. Did the authorities investigate and instruct the contractor to take precautionary measures?

5. A year ago on 21 November 2017, after the tragic loss of 11 lives due to the hillside collapse at the Granito development site, MBPP was asked to ensure the safety of the construction at Bukit Kukus. The former mayor in a site visit declared Bukit Kukus was “safe”. Among the additional safety measures insisted upon was building check dams, covering slopes with geotextile layers and increasing maintenance of the retention pond to remove sludge, by the hour if necessary. Were these measures ever put in place? Did MBPP monitor its own project?

6. Asking for new laws with higher fines, at this time, is clearly an attempt at distracting attention from the issue at hand. Are the authorities saying these workers died because we didn’t have enough laws? Did the authorities fail to implement and enforce the laws that we already have?

7. The authorities should now urgently focus on restoring damaged hill slopes and solving flooding issues. All development approvals have to take in account global warming. They cannot say yes to hillside development and then blame the weather when a tragedy happens.

Penang Forum is not engaging in a we-told-you-so exercise, as misconstrued by the press. This would be absolutely counter-productive. Let us instead look at what Hong Kong did to rectify a poor record of construction site monitoring after a series of horrendous landslides. The Hong Kong government set up a special Geotechnical Department in 1978 and staffed it with more than 200 professionals to carry out strict land risk management.

In 2014 the Penang state government made an official visit to learn from them. MBPP then set up its own Geotechnical Consultancy Unit which is supposed to monitor all hillside developments. Was it adequately staffed? What was done or not done, and could the Granito and Bukit Kukus tragedies have been prevented?

Until we have the capacity to manage hill land projects responsibly, professionally and adequately, the Penang government owes the people of Penang, at the very minimum, the following:

Firstly, a moratorium on all ongoing hill land development, whether public or private sector projects, and a total ban on those which have not started.

Secondly, a total review of the three paired roads (under the Zenith package) and the Pan-Island Link with its highly dangerous tunnelling though fragile hills, massive use of explosives, precariously situated elevated sections with pylons and pillars, and most of all, its proximity to densely populated areas.

An immediate introduction of traffic reduction strategies is necessary to obviate the need for more roads in hill areas.

Issues of professional and statutory liability of not only private parties but also government bodies, must be determined. If there was negligence, the culprits must be charged. The endless pushing away of responsibility and blame must end with someone or else it will be business as usual after the dust settles.

Heads must roll to show the difference of governing of Pakatan government as opposed to Umno/BN government.

Hahahahahahaha!!!!!— property tycoons. They’ve bought penang and penang politicians. They’re the ones that financed DAP’s campaigns in 2008, 2013 and 2018. The fact is Penangites are a bunch of idiots who cannot recognise the fact that this island, just like the rest of Malaysia, has become a technocratic-oligarcy dominated by the … property tycoons…

But here’s the punchline – Penangites are NOT EVEN GOING TO NAME AND SHAME THEM. They remain nameless and hidden. Accumulating their wealth and ruining this island.

Ha, ha who is having the last laugh? You are ignorant that the property developer go the highway is mppp? Who complain if the road gets jammed. You will swear if you follow the bus which stops at every bus stop. Even if you take bus, the bus has to stop and go due to road jam. Btw , if you own a car, where go you expect road tax goes to? Building places of worship? Also your house is built by you or developer?

The picture looks like Sunway water gliding structure,splashing down the slope?

Remind me of Sunway Lagoon feature in Penang Island, what say you?

Ditch the CAT Arrogance & start to listen to the people, experts & NGOs. Otherwise, it will be business of blame, twist & turn as usual. Now, BN is no more the ruling gomen, who else to blame for the 3 dead cats at the site? CM Chow should come out of the tunnel & apologise to Penangites, the families of the dead foreign workers & Bukit Kukus Naga. Note: Pg CAT Gomen always thinks it has 9-lives to play the fool with Penangites. Forget it & learn from these 3 dead cats. May not even come to the 4th… Read more »

It is qiute likely Penangites themselves, myself included, r the ones now passing the buck. These r the people we vote in on our own free÷will. Now they will not listen.

You mean pg lang do not complain about roads are getting more jam? Orso you mean more pollution and co2 if vehicles travel at crusing speed than stop and go in a jammed situation?

If Lynas not dangerous, why Australia does not want the factory in itsown country?

If very dangerous, why people still want to work there? Why people want to work in neclear plant? Dentist has to smell bad breath from patient? Nurses alway in contact of the spreadable diseases

Standard answer to when facing a problem by any government is to enact a new tougher law when most people are already struggling with existing laws.Over the years we have thousands of law passed but we still find problems and disasters existed despite of them and I am sure more of the same will not solve the problems.Maybe we have too many lawyers as politicians and not enough thinkers.

Lawyers, politicians, insurance sellers, and some accountants smiling he he he for public to commit to their plans, the may let you penanglang(s) shrieking for help if things turn sour.

We have a lot of talkers and spinners but not practical doers. Talk is easy but not doing it properly.

Rock & roll. Slip & slide. The elephant will be spectacularly white. When this continues to happen after completion……

Please dont use it and keep away from it even if you are a passenger, tell the driver.

Bukit Kukus landslide: An obvious case of wilful negligence the New Malaysia must not ignore https://malaysia.yahoo.com/news/bukit-kukus-landslide-obvious-case-123958540.html GEORGE TOWN: The tragic landslide incident in Bukit Kukus, which claimed the lives of nine people, is something that could have been avoided, the Center to Combat Corruption and Cronyism (C4) said. C4 executive director and northern region coordinators Cynthia Gabriel and : Stanley said the incident and others in the past such as the one that claimed the lives of 11 people on Oct 21 last year in Tanjung Bungah, proved the incompetency of the local council and state authorities in monitoring hill… Read more »