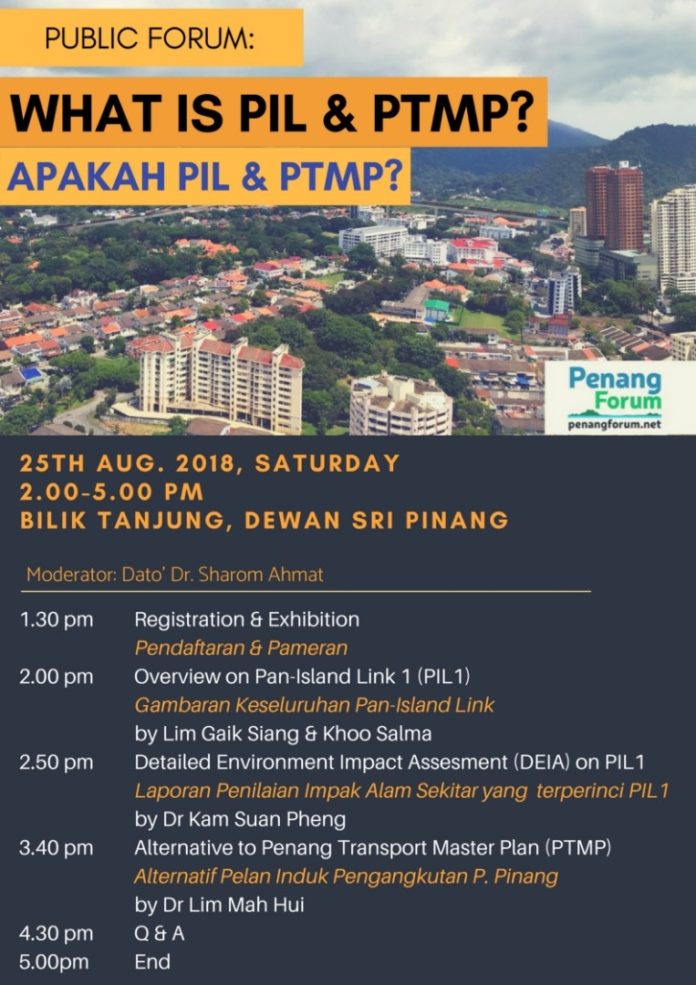 Only about two weeks remain for the 7 September deadline for public feedback on the detailed environmental impact assessment for phase one of the Pan-Island Link 1 (PIL1) highway, a major component of RM46bn transport proposal put forward by a contractor and two Penang-based developers.

At this crucial juncture, the Penang Forum, a coalition of public-interest civil society groups, is holding a forum this weekend titled “What is PIL & PTMP?”.

The speakers will brief the public on the Pan-Island Link and its likely impacts. The forum will also provide the people of Penang with a much-needed overview of the mammoth project mooted by SRS consortium.

Finally, it will outline a viable and appropriate alternative based on Halcrow’s Recommended Transport Master Plan Strategy already endorsed by the Penang state government.

The forum’s first session will be held in English and Malay at 2pm on Saturday, 25 August at the Bilik Tanjung, Dewan Sri Pinang.

It will be followed by a similar session in Chinese at the Penang Teochew Association (Han Jiang Ancestral Temple), 127 Chulia Street, George Town, at 2pm on Sunday, 26 August. 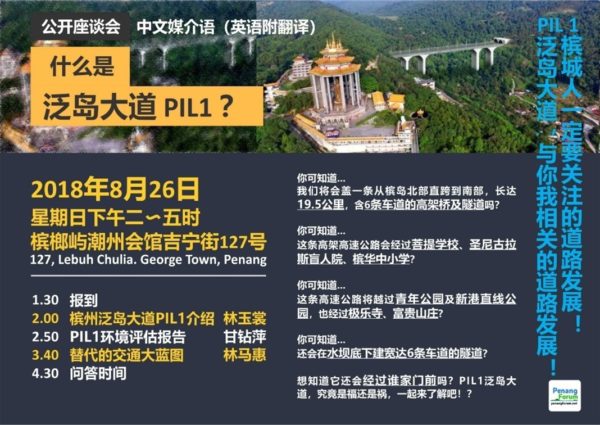 Both events are free and open to the public.

people want strong WiFi but not WiFi tower near their home.

People want efficient roads but not roads near their home.

People would like good public transport near their homes.

Many wish others take public transport to free up the road for them to drive without congestion.

If you have been driving your own car, it will be seen as losing face when people see you taking public bus.

“If you have been driving your own car, it will be seen as losing face when people see you taking public bus.”

Hello, ever since I started to take PenangRapid more than 5 yrs ago, my perception & feeling of the self-imposed social expectation above has changed. I don’t feel uneasy nor lose face when I stand at the bus stop. In fact, it is such a liberation from the social norms of self-defeating bin-chui. In fact, Rapid buses are now air-con, clean, affordable & not crowded to my liking.

Ah pek, rapid not crowded means tidak laku. So building brt not effective unless ah pek convert others to his belief.

Pls try harder to spin! The fact that public buses are not crowded emphasises the need to change travelling mode to help alleviate the jams brought about by many Lone Ranger drivers (driven by one driver with no passengers).

No gyrate fast enough. One driver because you want to go to belum, others to tengah and rest to atas. You want to go your My way.

Ah pek gets discount as warga mas. But if drive, only get warga mudah.

I hope more people can reason like you.
Unfortunately saving face is culturally ingrained in our society. Even downgrading to a smaller cc car is considered losing face.

I am proud of my son who travel to college by motorcycle rain or shine instead of emulating others in fancy new cars sponsored by parents.

Takes 2 hands to clap. Then we should not condemn mat rempit. They use kapchai like him.

When one is young & easily impressionable, one just wants to conform to peer social expectations to blend in.
Until one has gone thro’ life’s ups + downs, will one bravely think individualistically & retrospectively & not save oneself’s bin-chui in false pretension (outwardly) but later regret at the last mile of life’s journey.

My friend rent a new car for a week each year balik kampung for Hari Raya, got style can show to kampung people new car model each time. Gaya mesti ada.

Sure? Who willing to have buses plying in front of their house every 15 mins? NIMBY NIMBY

The forum should be held at the heartlands like Bayan Baru. Maybe there is no more library at Bayan Baru to hold such event?

Leave behind co2 foot prints. Unless use bicycle or walk, increase in fossil burning. Earth gets warmer

Leave the hills and parks alone. We have lost the beaches of clean water that we could swim in. Let us not lose our hills and parks too.
Tunnel underground if you must but please don’t tunnel through our hills. It’s too dangerous. Can they guarantee the hill tunnels will last 100 years as in Switzerland? Underground tunnels are much safer.
https://youtu.be/QaTN_R1b00I

PH, if problems arise from your hill tunnels or if our parks are affected, the price to pay will be huge…from Penang voters!

The state government has reached out to nearly 17,000 people through public engagement sessions to explain details on the Penang Transport Master Plan (PTMP).

These were conducted through 965 sessions since 2015, said Chief Minister Chow Kon Yeow.

Instead of forum, a debate between Penang Forum vs Penang government will be more meaningful.

Live broadcast by mainstream media & anilnetto.com so more Penangites can witness the debate from the tango horses mouths & gate keepers of wild horses?

True, each got own points.
Better debate and let us decide.
Otherwise one way propaganda from either party. Maybe Anil can have point by point refuting CM Chow?

Can enlighten us who are the contractor and two Penang-based developers for PIL?

Or will it only be uncovered at Penang Forum’s forum?

Previously under Gelak-Gelakan, it was SP Setia & Goh Choon Lye.

Who design the alignment for SRC? SRC ask office boy or tea lady to draw some lines on the map? Or they get some INTERNATIONAL engineers from local or over the sea? Malaysian engrs also involved in international projects. So they are INTERNATIONAL.

Just imagine how many people need to drive to George Town for these events.

Cee how many coming by public transport.

Penang Forum should take the opportunity to do a survey for the 300 participants to today’s forum.

You expect Penang Forum to provide chartered bus service to ferry people to the forum?

If not come by bus, what is the point of having more buses but empty with no takers?
Like some western societies, trams, trains and buses and most kereta Ku leaving them like hantu.

You might as well ask Penang Forum to cater for refreshments like Penang Chendol at the event.

Orso don’t forget one tone mee or hokkien mee. People have been seeking high and low. How to search? By bus? Or by car? By car, no wonder India gets heavy rainfall flood and hundreds died. In down under, scared holy cows are affected by drought.

Mahathir said we are damn spoilt by free money showered by the last regime. Under Pakatan Harapan, we should be more resourceful & don’t expect free this or that, not even from Penang Forum. Pls learn.

Agree, so tell pg lang if they want to go from one place to another, think of other means. Skate, use china make tricycle with carrier so all can take turns to cycle, skate board, scooter etc