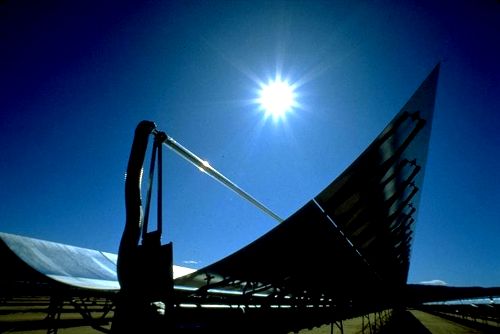 There is no reason why Penang and Malaysia cannot become a centre for research into green energy sources, especially solar energy (Photo credit: Wikipedia.org)

I am dismayed that the Cabinet is seriously looking into nuclear energy as an alternative energy source. This excerpt from the NST:

Deputy Science, Technology and Innovation Minister Fadillah Yusof said another objective of the paper, which outlined the direction of nuclear power, was to enable further studies and plans on the initiative to be carried out by his ministry and the Energy, Water and Communications Ministry.

Faidilah said while nuclear power would only be a reality after 2020, the foundation of the plan and efforts to create awareness of nuclear power needed to start now.

He said it was important for the public to know that nuclear power was safe, environmentally friendly and more affordable in the long run.

Would you want to live near a nuclear power plant?

It’s not as if the situation is critical and we need more power fast. Last I read, our reserve margin for electricity has crept up from 41 per cent to 47 per cent. And a global recession is looming. Meanwhile, TNB has to bear a heavy burden in making capacity payments to the IPPs for electricity it doesn’t need. These are excerpts from The Star:

It posted a net loss of RM282.9mil in the fourth quarter ended Aug 31 compared with a net profit of RM168.4mil in the previous corresponding period.

And they are facing “challenges” with more power coming on-stream:

On the prospects for FY09, it said there were significant challenges with the commissioning of the 1,400MW Jimah power plant (thereby raising capacity payments and the reserve margin from the current 40.8% to 47%) and rising average coal prices.

So we have a 47 per cent reserve margin and huge capacity payments to the IPPs – and that is before we take into consideration those expensive plans to transmit electricity from Sarawak to the peninsula via RM15 billion undersea cables.

And now they want to build nuclear plants, which would cost more than RM6 billion each.

Why not use all this money and carry out research into cleaner energy sources especially solar energy? It would be a lot safer for all. If the Pakatan were to take over, what would their national energy policy be like?

No matter who’s in power, we need a national energy policy that is clean, green, safe and sustainable – and one which encourages conservation of non-renewable resources.

Have you people ever seen the cellphones cooking the egg yet? A lot of science hasn’t been fully explored yet, and we haven’t seen the detrimental effects of a lot of things that are being peddled by companies looking to make good profits. WIFI , WiMax, for example. We should make do with what we have for the time being, as far as i am concerned with internet connectivity. There is plenty of places to get into the internet and getting a dial-up or even broadband is not prohibitively expensive. What Penang really needs now are better schools with bigger… Read more »

come on tell us what is this CAP=Telekom Malaysia equation.

Solar energy is plenty in Malaysia , if Penang government is not smart enough, then it will prefer nuclear source rather than sun. Seeing those umno gangs relationship with Iranian president ‘s nuclear weapon program, one can understand why federal government want to go into nuclear research.

I AGREE with HI. You’re spot on! When politicians are too weak to take a tough position on public safety matters, innocent citizens suffer while corporations laugh all the way to the bank. Tobacco is a good example. The tobacco industry’s connection with governments everywhere and their financial influence over the media (via advertising revenues) maintains the publicity and demand – and hence, profits – for cigarettes. That’s how the industry controls people’s purse strings – and destroys lives. I DISAGREE with wira. Your analysis on Wi-fi is too simplistic and your conclusion is incorrect. Your arguments: 1) there’s far… Read more »

Anil,
Our leaders are trained to be more idealistic and not wisely.
The technology in the world are looking into Solar energy but our leaders still backward. That is the typical difference between highly knowledge and least knowledge leaders.

solar solution is expensive, as any other renewable solutions now. But what other choices of energy source that Malaysia can rely on if the oil & gas getting more expensive and Malaysia is no more the net exporter of oil & gas. Malaysia must have an energy long term plan to prepare for the next 5 to 10 years and the next 20 to 50 years. What’s the energy source it will rely on. I believe the long term viable option is very limited. nuclear ? solar ? wind? biomass ? biodiesel ? I guess we need all of them.… Read more »

Would agree that it would be far much better for all Malaysians and the environment that we all share and live in to go the solar enegry way. It is ridiculous to head towards the nuklear power just to show that “Malaysia Boleh” — like the astronaut thing. Total waste of public funds. The risk of having such energy is still being studied by the Russians and the Americans. It would be better for all, that we do with what God has given us naturally, wind and solar power. If they can build a car to race with solar power,… Read more »

Koolgeek, your comments are stupid and offensive. Penang going wireless is not an issue about me being a *** hypocrite or you being a *** koolgeek. It is about the usual unimaginative and not so knowledgeable politicians falling for the trappings of businesses who woo them with one sided facts and fancies. Plus there is the “Kam Ceng” between certain persons in power and their business kakis that automatically blinds the good sighted. End Result? We get people who cannot read but speak loudly for a project that is detrimental for the health and economic well-being of the people especially… Read more »

I am totally dumbfounded on why Tenaga intends to concentrate on Nuclear Power, when most developed countries like Germany is opting for Solar Technology due to it’s environment friendliness. These further studies that Deputy Science, Technology and Innovation Minister Fadillah Yusof is doing is unnecessary, why not concentrate their studies on Solar Energy. This is like buying second hand goods like War Ships and Planes. Considering our Geographical location, we can produce more solar energy than Germany. Also you dont need many employees, 1 man and two dogs can run the place. See link: http://www.washingtonpost.com/wp-dyn/content/article/2007/05/04/AR2007050402466.html

Rajan, your comments are ridiculous. The reasons stated in CAP’s statement is as clear as the light of day and the evidence is there for all to see. If only you care to READ. And CAP = Telekom Malaysia? Who are you kidding! That’s the most laughable thing anyone has said in this blog. Read and digest these 4 words: You are dead wrong. Having closely followed CAP’s work on various consumer issues for over 2 decades, I can safely say that there is no such link. CAP treads where angels fear to tread and they spare no one. As… Read more »

Mr Rajan, I have just read Idris’ statement very carefully. It looks to me like he has very clearly provided scientific evidences and various authoritative viewpoints to support his claims.

You mean to say he is bluffing and has some secret agenda? Why do you say CAP = Telekom Malaysia?

Save the talking CAP. I am sick and tired of your arguments. Anyway, if you have any constructive evidence, please show. Otherwise (I could conclude) CAP = Telekom Malaysia…..state your reasons clearly.

Penang should not only lead in solar power research but also be a pioneer in the usage of wind power. The seaside at mukahead is an ideal place for farming the wind power.

Not only the wind/solar pwr can bring us sustainable energy but it also can generate extra income through green tourism.

There are people who don’t know how to read anything beyond three sentences of advertising message.

Could you help to highlight the captions etc. of SM Mohamad Idris’ long piece which appeared in Malaysia Kini please? Thanks!

Like someone said earlier, Penang is so early and getting more polluted by the day, just look at the dirty eating stalls where the hygiene is questionable… why worry about any possible side effects of WiFi. More will probably die from food poisoning should it hit Penang. Its not whether it will, it is a question of when?

OK, if currently reserve margin stands at 47%, what will it be post Bakun or with the other plants hydro plants mentioned in the media last week? Who actually does the planning for these things?

I’m looking for a total solar energy solutions (not hybrid with TNB grid) and had made some inquiries on the price available in Malaysia and what i found is, it’s too expensive.. imagine to have a 100 watts of power – to support 1 notebook or other equipments and 5 energy saver DC bulb.. the cost is around RM3000 with car battery.. and if i want to use it’s deep cycle battery.. another RM1000 is needed… So I think the only barrier of the solar energy is the price… This is because most of the equipments are from overseas (germany… Read more »

HI, I hope you are not posting that long piece using a wifi router or are using a mobile phone, cuz that would make you a … hypocrite.

Do we need to ask why when the answer is as plain as the noses on on our faces?

Has any mega project here in the past been about need??

Everyday, every utterance, every action from these xxxx lords of the land read xxxx the stupid rakyats, so now they are telling us we need nuclear energy konon nya! XXXXXX!!!

Wi-Fi fallacies endangering public health SM Mohamed Idris | Oct 20, 08 3:34pm We refer to the letters Focus on the real ‘killers’ in Penang, Don’t throw Wi-Fi baby out with bath water, CAP, stop harping on Penang’s Wi-Fi move, Wi-Fi – Penang gov’t doing the right thing and Wi-Fi has more pros than cons. There is no room for misjudgment, bias and empty rhetoric in an important matter like Wi-Fi, where right thinking is crucial in protecting society from impending and unnecessary harm. Frivolous polemics and faulty thinking are no solution to the matter and only serve to bend… Read more »