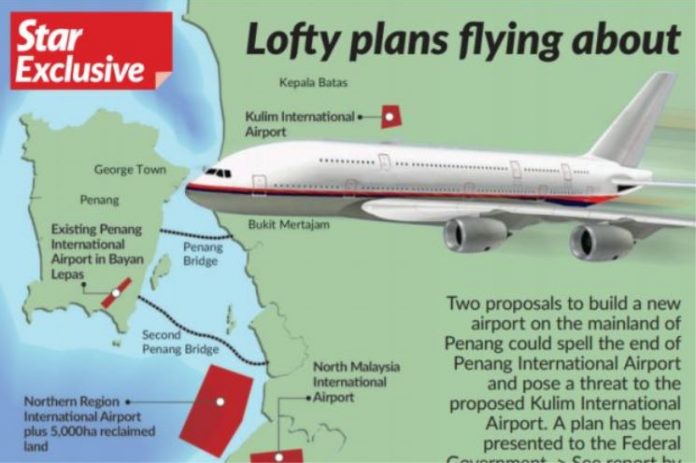 You’ve got to wonder whether those thinking of these extravagant ideas have the best interests of northern region residents at heart – or if their minds are clouded with property development, construction activity and ringgit signs.

Earlier, we had two airport proposals:

Now, two more proposals. Take a look at this “exclusive” story in the Star, which floats two ideas to literally test the waters.

Notice the land swap proposal to build a new airport in exchange for developing the existing site of the Penang Airport, which happens to sit on prime coastal land in the south. The value of the land is reportedly about RM7bn. Imagine what the gross development value is like.

[Update: The Ministry of Transport has now denied knowledge of the latest two proposals.]

All this is not much different from an apparently aborted proposal not so long ago to build a new air force base in Butterworth at a different location in exchange for developing the present site of the base in Teluk Ayer Tawar along prime sea-front land.

And so the love affair with swap deals continues.

How do we square all these plans with with Roger Teoh’s view last November about the existing Penang airport; “There’s the airport in Penang, do we need more, expert asks“:

In contrast, the Penang airport only handled 70,609 flights.

“This comparison shows that existing infrastructure can be utilised more efficiently, where the number of aircraft movements in the existing runway in PIA can handle at least four times more aircraft movements with further optimisation,” said Teoh, who is currently pursuing a PhD in transport studies at the Imperial College in the UK.

He said optimisation to boost the Penang airport’s capacity could be easier to achieve.

“The airspace above Penang is not congested relative to the London airspace, that is one of the busiest in the world,” he added.

He also questioned the Penang government’s projection that the airport in Bayan Lepas will reach full capacity in 20 to 30 years.

Teoh said the projection would depend on assumptions on population growth, gross domestic product and air travel demands.

“The further we extrapolate in time, the larger the uncertainties in our forecasts. It is not necessary to try to solve a problem today where it could only emerge in 30 years.”

So why waste time talking about building more airports. Why not just optimise Penang airport first.

At present, the airport is in the midst of building a seven-storey car park to provide 1,700 extra parking bays. (This is supposed to create a more “joyful airport experience”. That’s what the notice at the construction site says – no kidding. Never knew a multi-storey car park could create so much joy – even if you have to pay for that joy!)

Maybe all we need is a bigger passenger terminal rather than a new airport. Check out what public transport whizz Cameron Kang has to say:

It tells you a lot that in all these fanciful discussions of new airports, swap deals and land reclamation, two crucial issues are rarely discussed, if at all:

BATU KAWAN, June 15 — Finance Minister Lim Guan Eng has advised the media against being a stooge to the interest of private sector companies by publishing fake and baseless news.

He said that the media must be professional and responsible towards the reports that they issued.

The Star was quiet after the fake news on airport.

MCA must apologize. This is not check and balance but deceive and lie.

Who owns the current PIA land? Is it state or federal? I would think state, right?

If there’s indeed a proposal not going through FM, TM, Penang state, it must have gone through PMO or Azmin’s investment and development ministry, right?

Also note they are talking in terms of hectare, not acres. So a bigger dimension than often discussed elsewhere.

Gerakan Deputy President Oh Tong Keong said clearly the PIA is being “threatened” by these proposals and is facing the prospect of being closed down.

Ah Keong should be active with young breed of non tainted Gerakan on local matters and dont wait till GE15 to raise matter of concern eg plastic corruption and digital library for all communities not just selected ones.

There you are ! Here’s a reporting in The Star now on the proposal for new airport(s).
https://www.thestar.com.my/news/nation/2019/06/11/govt-must-study-airport-plans-first/

Q: Who is the ultimate decider on developing Penang’s airport or creating another airport, the state gomen or Federal? It now looks like Penang Island is goldmine thro’ swap deals for an opportunistic win-win deal – shift the present airport to another location & let us turn the present airport land to gold! And the sea space is the ultimate sacrificial lamb to build more & more. In spite of property hang hanging for how long. A new paradigm shift to classic lifestyle Feng Shui: che to khua hai (stay on island, view the sea). And welcome to Malaysia Baru… Read more »

Either the Star is sensationalising a fake news or something was already in the work. Some people must be lying thro’ their teeth to cover up.

LGE denied. So fake news on the Star?
Is MCA the owner of the Star trying to create havoc?

Why Roger talk UK only? Ang Mo always better? Why no mention HK? Why no talk on iconic HK tram? Only narrow body tram in whole world compare to usual wide body tram which Hong land cannot afford. Why not mention Hong land relocate Kai Tak to man made island off Lantau Island and now expand the terminal and reclaiming third runway? Who is making another troll and kbkb??

Mabuk with susu? How small is kai tak airport? Roger is drinking your susu when Kai Tak is decommissioning. Further why pommy wants to relocate to Lantau in spite of protest from China. No wonder you dispose President Xi and loves trump. Peng land ang Mo city? Cannot compare to Chinese city?
Why pg ngos don’t use hk trams as example? Hk trams is cheapest in world.
Why pg ngos don’t explain Macau very small place can walk from border to ferry terminal about 45min but still jam with cars and kapchais? You can take casino buses.

You want peng land to be ang Mo city to compare with trump’s cities?

Ang mos transfer Kai Tak airport to man made island off Lantau no objection but Malaysian does to their own state cannot? Kangaroos are building new air port in Sydney no kbkb. Now those talk about green wants airport, burning fuel and polluting noise wants airport to be a lose to housing

why that yet to graduate Ang Mo wannabe never tell us to emulate the Ang Mo to ship out our thrash to other poor countries…?

To sum it all, we have voted in an even bigger monster(PH) than the previous BN government !

But the Ministry of Tranport denies any knowledge of the latest two proposals.

Haha, only if it comes out to be true later ?
黑箱作业（Black box operation – meaning secretly under some steamrollers）!

Speaking of black box operation, Penangites must beware of the new scam scheme “S Block”, a revival of JJPTR.

Somehow our authority is not coming hard on that JJPTR chap now on the loose.

Better for Anil to verify the news first before causing knee jerk reactions!

Many fallen into The Star ultra sensationalization to gain readership? Trust Anil for verified news.

Star is the mother of all fake paper and you have been supporting it.