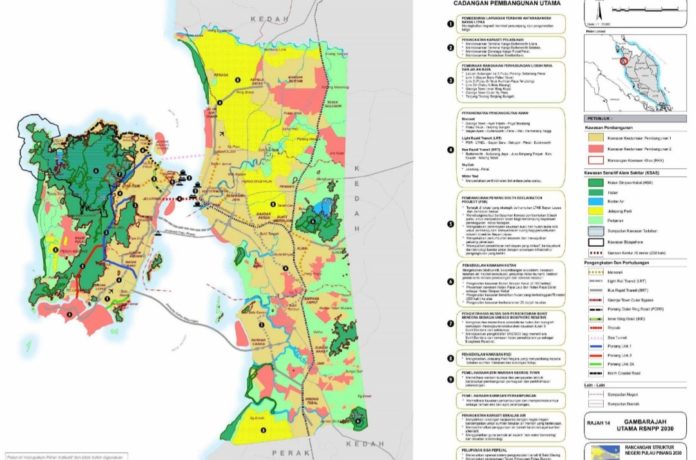 The Penang Development Corporation already has over 4,500 acres of land under its care in the Batu Kawan area in mainland Penang – so why is the state government so intent on reclaiming 4,500 acres of land to create three island off the southern coast of Penang Island?

According to the state government’s newsletter Buletin Mutiara:

So plenty of land there – and there’s absolutely no need to create three new islands off the southern coast of Penang Island if the state is really keen on balancing development between the island and the mainland.

Why congest the island further with an additional 446,000 people?

Penang Island covers an area spanning 293 sq km with a population density of about 2,500 people per sq km. The density on the flat land of the island would be much higher due to the sparsely populated land mass covered by the hills of Penang Island.

In contrast, mainland Penang covers 751 sq km with a population density of 1,100 people per sq km.

So why would the state government want to cram 446,000 more people on the island – assuming it can find 400,000 additional people by 2030, which is a big if – instead of channelling a larger part of the future population increase to the mainland? Surely it can carry out its “economic transformation” on the mainland, where the land is readily available.

Money. Pressure by DAP cronies to cough up more land.

4,500 ac already sold, so they need more money. And this is what the hunger developer want it!

They will build so long as there is demand.
Many people buy properties for collectio, never mind empty no occupant. I think many Chinese rich buy for next generation.

Good for development of Penang can create more jobs!

Indecency of hasty developments call for cause for hefty financial concerns. Indecent haste over RM230 billion mega projects https://www.malaysiakini.com/columns/475151 QUESTION TIME | The indecent haste with which projects worth RM230 billion are being pushed through without proper consideration and without enough information raises serious questions over the re-emergence of patronage. Once these contracts, the sizes of which have not been seen before, are awarded, it would be very difficult to reverse them, whether by another government or by a new leader. In the haste to push these contracts through, there is much that has not been answered, reflecting non-adherence to… Read more »

there has been no haste, ten years has passed since this transport master plan first pondered upon…err..ok maybe it is a little bit too fast for those kpkb retiree with nothing better to do yet with unlimited time…..hehe

PDC has 4,500 acres of land in Batu Kawan – so why create three islands? Simple. It’s what the greedy developers wanted. “You want instant funding for PTMP, give me the 3-islands development”. If not for the MO#1 alleged national financial fiasco, Putrajaya under PH might have given a more reasonable funding BUT without asking for 3-fantasy-islands development as a swap deal. Simple Analogy: If you are hard pressed for instant funding (money), asking from Ah Long is super expensive. The ends justify the means ending in ballooned figures! And the T&C is not yours for the asking. So, the… Read more »

Reject the foolhardiness of Penang state gomen’s reclamation frenzies that will destroy Nature & cause irreversible damages that the gomen may have no answers but blame God.
Reject this Chow Chow myopic reclamation vision (from north to east to south) for Penang.

Ngos is all deep silence and will they oppose if relocate the airport to kedah or perak?

Looks like those who spent hard money getting a still relatively (with respect to mainland property) expensive condo will regret they are not deemed “exclusively got class” compared to future condos off the artificial islands!?

it is very clear the keyword there is ‘balanced approach’…unlike the NGOs who only want theirs to be be the only approach…state government take care of interest of all level and all segment of society. NGOs take care of their own ego…

@khalidkarim Gearing for high-income markets will cripple the locals whom’ll naturally relocate to the m… https://t.co/vJfmboAgOb

Penang state gomen prefers the Cosmopolitan Penang for the Rich & Famous.
Who cares for the ordinary bo-bin-chui Penangites?
State annual growth ballooned by property development sector is more important as a portfolio (to shout out loud) than the people who voted them! Who cares if the property sector burst anytime sooner?

Bin-chui (face value) can drive many go broke spending on overpriced overhang condos while as the result being over thrifty (worst than than vintage days kiamsiap Penangites) on more life essentials.

Early days Kiam siap generation save up to let their children squander off on overpriced properties that overhang now. Be caution if you have not surrender your money to your children for binchui spending.

you want to kpkb , please kpkb with fact lar….hehe

You very happy can buy condo built by developer. Why don’t blast at heritage shop owners wanting a high price for their properties?

Why he-he a lot. Are you damn serious in what you he-he???
Frankly, who will take you seriously???

what’s wrong with you? does hehe offend you?

Tomorrow 1 year anniversary of PH government. Can have discussions among readers how we feel the prestasi of PH?
Already too much focus on Penang transport and islands. Time to shift focus to national issue.

because land is always not enough in Penang, and only 3 fantastically built,designed and planned islands can fulfill the objective of funding PTMP which eventually benefit all Penangites….so simple even 3 year old can understand …hehe

Land is not enough on island. Landed cemetery on island may be exhumed very soon for the coexistence of humans in condos and Beings of another dimensions.

The problem here is “Are there any affordable housing provided?”. Land is not enough, but if no one can afford to live in those islands, what’s the point? Those that launder money can afford, normal folks like us earning 2-3k per month can’t. CAT? Cronyism, Arrogance, Terrible!

if gelakan too lazy to ready it up, here’s some update for you…there will be affordable housing in those islands…of course it will be still affordable to those who work 3 days then missing in action for 2 days…

2-3K a month now difficult at Batu Kawan also daily shuttle to island eg to work or kudx to school can drain one off to early demise.