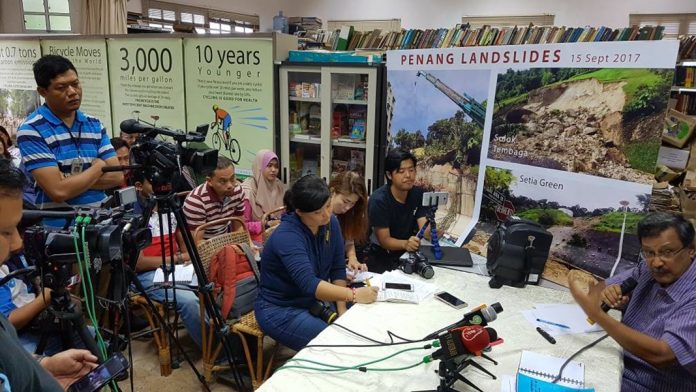 Civil society groups in Penang – Penang Forum (of which Aliran is part), the Consumers Association of Penang, Sahabat Alam Malaysia, and residents groups as well as environmental group Peka – turned up in full force at a packed press conference this morning to call for an end to all hill-slope development.

They also called for a wide-ranging royal commission of inquiry that would cover the approval process right from the top – and not simply an inquiry limited to work-site safety.

At the press conference at the CAP office, Penang Forum representatives said its Penang Hills Watch initiative had highlighted 29 cases in its first report to the state government in January 2017. The first of the 29 cases (case number one) was the site of the landslide yesterday. The state government then responded on 26 January that “earthwork is being monitored” at the site.

On 3 April 2017, Penang Hills Watch submitted its second report to the state government listing more cases. The second report also followed up on the 29 cases (including case number one) mentioned in the first report: 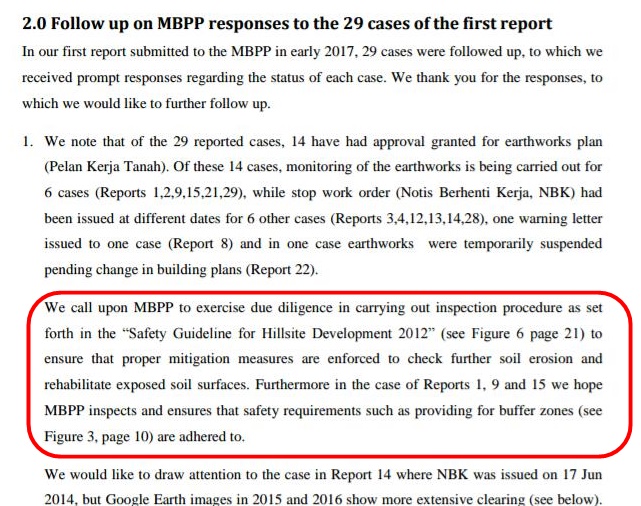 Referring to case number one among others, the second report read: “… we hope MBPP inspects and ensures that safety requirements such as providing buffer zones… are adhered to.”

Read the Penang Forum statement: Another call to stop all hill-slope development immediately

Read also the Aliran statement: The price of hill-slope development

Penang Forum also called for the names of all the workers who perished to be published and their status (whether documented, undocumented or stateless), whether they were insured, as well as all the other major players behind this tragedy, including those who had granted approvals for the project and its various stages.

Representatives from the Sungai Ara residents group expressed their worry over another massive hill-slope project in their area which they said exceeded all the thresholds.

Meanwhile, who will take responsibility and resign over this affair? (Yes, that’s what they do in other countries.)

Of course, journalists from many of the BN-controlled media were also present at today’s press conference. Will they report as enthusiastically about environmental problems in the BN-controlled states – like the deforestation in Sarawak, for instance?

Something for the Penang environmental NGOs to look into:

Chile’s President Michelle Bachelet signed a bill yesterday that seeks to ban plastic bags in more than 100 coastal areas in a bid to halt the accumulation of ocean plastic. The move was aimed at taking care of the marine ecosystems, as fish are dying from plastics ingestion or strangulation.

To simple for ah pek to shout. plastic gas are killing all marine creatures and even cows and goats when they eat them

Pls shriek into a plastic bag. So much irritating noises!
Btw, still scared to admit, zoro?
What a shame for hiding zoro behind Shrek, oops Shriek!

No use !
NGOs have no votes!
They can’t even control their own members how to vote let alone influence the public!
DAP would tell the voters that these NGOs are all … carriers and they carry only the biggest … in BN!
These are sent or directed by the BN big guns to gun down the DAP government who are the only party actually fighting the BN!
DAP equally be corrupted just because BN is a bigger corrupted party !
So nobody will listen！
And so DAP is not bothered!

Agreed that the NGOs cannot really kick the Pakatan state government but they can exert some influence on some voters to vote against Pakatan but then again, when the choice is between Pakatan and BN, these voters may either bite the bullet and vote Pakatan or they may either spoil their vote, cast a protest vote for some third candidate or not vote at all. DAP’s strongholds in Penang are mostly in the Georgetown and north eastern part of Penang Island plus some part of mainland Penang. UMNO’s strongholds are on the west coast of Penang island and some parts… Read more »

NGOs warn they will kick the … state gahmen out if they do not listen but last time they kicked the other … gahmen out and this … gahmen no better despite all their … tok about “Competency, Accountaccy & Transparency” like well worn mantra.

So if in GE14 kick this … state gahmen out, Penang just get back old … gahmen.

Which way we rakyat vote we still lose and still get a … gahmen.

Penang Forum: Landslide inquiry must cover all bases http://www.freemalaysiatoday.com/category/nation/2017/10/22/penang-forum-landslide-inquiry-must-cover-all-bases/?utm_source=feedburner&utm_medium=email&utm_campaign=Feed%3A+FreeMalaysiaToday+%28FMT+News%29 Attention: P RAMASAMY, Penang Deputy Chief Minister II (You claimed the landslide occurred on flat land, but expert differs) Scientist Kam Suan Pheng said the Tanjung Bungah incident could only be expected when a development took place on such a steep and cut hillslope. She said under existing laws, development at hill land above 250 feet and/or with a slope gradient beyond 25 degrees should not be allowed. “The common practice by most developers now is to cut back the slopes to make it flat. So what is left of the… Read more »

Ah pek depends on scientists not geotech engineer? DOE talks about fauna and flora and what do they know about slope stability, soil mechanics, critical state soil mechanics, pore water pressure, ground water, triaxial tests, brazilan test, Rock recover quality, slip zone, fault and fracture.
Prof and DCM said is a flat ground and one report said they are doing a basement. Base and 6m high ground results in 3 to over 4 storey building

Anatomy of a Landslide (Animation)

Civil society groups issued a warning to the Penang government that it could suffer the same fate as the previous BN state administrations if it did not pay attention to the unhappiness over the major development projects on the island.

In 1990 and in 2008, Penang voters kicked out the BN state governments after sustained campaigns to stop major development projects in the state. The chief minister was voted out in 1990 and then the whole BN administration in 2008.

No worries welcome back umno and BN. Party begins

Still beholden to CAT?
Of course not a Penangite mah, who cares?
Pls try harder to spin…!

What do ah peks care? Still howling and meow like the CAT. All empty noises. Try harder and spin harder.

What a copyCat (trained in Komtar?).
Pls try harder or you will get less dedak!

Ah pek try and spin harder. It is all CAT in penang and rain cats and dogs. Exercise is good for you. Don’t drive 4wd. walk more too.

It was a construction site mishap, Lim insists
Read more at http://www.thestar.com.my/news/nation/2017/10/23/it-was-a-construction-site-mishap-lim-insists/#bBAa7bOUqHqyUj6F.99

So, no rain means this is solely the fault of contractors, engineers, etc. at site?
What if it had rained that day, the fault is on God of Rain? Wrong?
10 small rivers flow above the site near the quarry, the chances of underground soil movement should be investigated. Actually, the whole hill slope above is ‘fragile’ given the blasting of granites, water flow, exposed soil at sites & slope angle of development.

Must be exco and pg gomen fault for oversight of 10 rivers. Contractor and architect can goyang kaki and no need to be professional like doc or accountant. If accidents result of overlooking nature push the responsibilty to exco and gomen

This is more of work site mismanagement than hill development issue. Everywhere in the world you can see development on more critical site than this one in Tanjung Bunga. Development of this scale have safety managers on site, CIDB officials regular inspection from day one. These people should be call up for explaination and disciplined if neglects are found. What is the point of barking up the wrong tree.

Agreed, but it just seems like nobody care about it, even this is not exactly a HILL DEVELOPMENT… Anti-intellectualism, anti-rationalism, just sentimental statement without any actual fact or research or even a little bit of construction knowledge… I think most of the NGO don’t even have any expert in the relevant field, just like their so called Better, Cheaper, Faster Transport Masterplan. When this kind of construction is so common in the whole world with no problem at all, different kind of technologies can handle the construction neatly, but they still prefer to stay in the cave. This tragedy is… Read more »

Not exactly a hill development? Better take another look at the site. The tell-tale sign is the vertical cut of the hill edges too near to the site. If people who are concerned for safety have to be experts of this & that, then the world is a very dangerous place for greedy fellas out there to freely create dangerous precedence. So, what is the use of a gomen? Might as well we the people decides what’s best without a gomen. Also, if we think we are masters of nature to exploit it without a care, be prepared for more… Read more »

But will there be political will to push through reforms? Or just end up playing to the gallery?

It will be a very tightrope walk for CAT Gomen, which all this while has been apparently ‘too developer-friendly’ & arrogant towards opposite views & public cautions. Now, with this tragedy hitting us while no rain but shine, Penangites have to think twice before buying properties right below the foothill or sitting on the hill looking out to sea, which was once a favoured Fengshui belief. Many may change attitude towards hill development with great caution. Q: Will there be a change of present hill zoning? Q: Will the 250 ft no development rule be absolute mandatory? Q: Will the… Read more »

No guarantee that BN would not go for building frenzy and hill cutting if elected to run Penang.