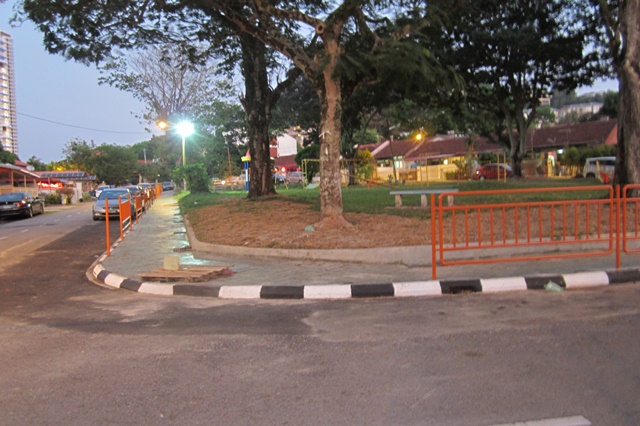 The following letter was sent by Renji Sathiah, the Tanjung Bungah Residents Association chairperson, to the Penang Island City Council mayor and copied to the Penang JKR director:

I am writing to you regarding the construction of concrete pavements and railings in Tanjung Bungah.

Currently, this work is being done in the Jalan Pelang/Warbuton/Pakawali/Seaview field area. This is a
small and quiet residential area. The small field is directly bordered by single storey residential properties
on all sides.

The question is why is such a major pavement and railings project being carried out in this quiet neighbourhood? There is no vehicular or pedestrian traffic except for the local residents. Furthermore, the pavement construction is done in a way that the little green areas in front of the houses are removed and the railings block access to the small field as well as being unsightly.

The same work was done last year the small street, Jalan Cheah Phee Cheok on Tanjung Bungah hillside. The pretext was to replace the drains on the sides of the roads which were in good condition, needing minor repairs. As a result, green areas were cemented over with pavements ( never used by residents or others) and ugly useless railings placed all along the street along with new drains installed.

There is no justification for such work which is a serious waste of taxpayers money benefiting contractors at the expense of the residents. People living in Tanjung Bunch have had to put up with unreasoned overdevelopment in past years and they are most unhappy to see their neighbourhood further degraded.

We, the residents of Tanjung Bungah, would like to see this recent work stopped immediately and rectified.

We would like to see an investigation carried out on why the work was initiated, by whom and at what cost.

We insist on being consulted on any future projects of this kind.

I hope that YDP Dato’ will do the necessary to resolve this matter.

I am copying this email to Encik Ahmad Latiff, Pengarah of the JKR in Penang.

In the campaign to kill off the heritage in the name George Town, the name of the town or city council – they seem to be undecided – implies that it governs the whole island, i.e. half the state.

“construction of concrete pavements and railings” – to provide jobs and contracts for Umno contractors?

Yang vs Rayer are like Madhater vs Jibbie. They want readers to pay attention to their feuding matters.

About YB Rayer service centre…. after the demise of his hardworking relative and assistant…, his service centre at the Hunza market at Greenlane heights had fallen into disarray. One may never know when the centre is open because a time table is not posted. I hope YB will pay attention to this as tongues are beginning to wag about DAP’s service in that area. YB should be constantly reminded that Sri Delima is not an assured seat for DAP.

NGO says the Penang Government must not fail to preserve the natural heritage in their pursuit of development.

In my area, the poorly maintained pavements and potholed roads were recently rendered worse by the incessant digging over a protracted period by PBA and their contractors. Will the DAP assembly person, YB Rayer, please follow up when will Jalan Tembaga and the feeder roads in that area be resurfaced and the pavements repaired? Incidentally, the stretch of road along Jalan Besi leading to YB’s home had recently been beautifully paved. I wonder when is our turn?

He is sleeping. When you forward a complaint to his service centre, his clerk will receive it. After when you enquire again, they will say they never receive your letter and ask you write again. The next time you write in and enquire again, the clerk will ask the service centre people, hey anybody received this so and so complain. They search and search the centre, oop sorry we did not receive, please write again.