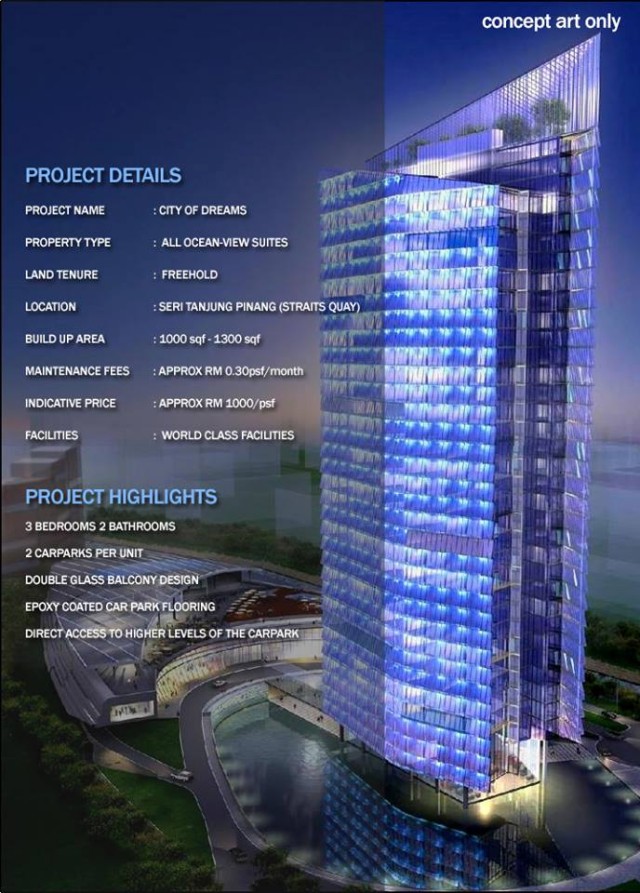 These are expensive condos purportedly valued at RM1000psf onwards (freehold).

Scores of potential buyers are believed to have expressed their registered their interest in the project. According to the City of Dreams Facebook page, the project has started “taking registration with only RM5,000 fully refundable deposit”.

The project involves about two or three blocks somewhere behind or near Island Plaza in Tanjung Tokong. But the exact location is unclear.

The name of the developer has apparently not yet been revealed, but it is believed to be a local company with international connections.

The project is being marketed by Zeon Properties Group, according to the project’s Facebook page.

Although the property is located in or around the Seri Tanjung Pinang area, it is unrelated to E & O (which is developing Seri Tanjung Pinang Phase II on reclaimed land), said a sales agent for the project. He added that the name of the developer would be unveiled in a couple of months.

Under Phase II of the Seri Tanjung Pinang project, E & O is supposed to hand over 110 acres to the government, which the state government may use as compensation-in-kind for the tunnel contractor. Of the 110 acres, 60 acres would come from the Phase II reclamation and 50 acres from Gurney Drive.

This raises further questions. Can anyone enlighten me about the following:

Make a note of this project. I am sure we will be hearing more about it when the name of the developer is unveiled.

P.S. Incidentally, directly across this plush new condo project, across the North Channel, lies the shabby Taman Tun Dr Awang low-cost flats in Bagan Ajam, Butterworth on the mainland, with the channel perhaps illustrating the gulf between the rich and the poor (see map below).

As you can see from the slideshow below, the flats badly need a coat of paint while rubbish disposal remains a serious problem.

Penang property hike has nothing to do with the state govt. It is a supply and demand market. In fact, the state govt has imposed several laws to prevent speculation. Many people move to Penang because it is well managed and has a capable team to run the state affair. Unlike other states that run by corrupted BN reps.

Tallest tower in Malaysia to be built in Johor soon?

Penang is going to the dreamlands of the rich folks with spare monies to splurge on high-end properties for speculation and no much for job creation. No other choices to invest but this one chance before the Ringgit plunge to the Deep Blue Ocean of Malaysian strategy. Ordinary folks can do nothing, much less work 4 jobs at kacang puteh pay paid by the rich-not-enough. Those without properties will one day have to emigrate to mainland or Thailand as many landlords will raise rentals. With price increases for almost everything, the majority will indeed have nightmares and not sweet dreams… Read more »

We should ask ourselves why locals cannot afford to buy.
Why gaji tak naik? Why purchasing power and Ringgit keep depreciating?
Ask why people are still dependant on BR1M.
Then seriously ask yourself how the ‘High Income Nation’ dream can be realised in the targeted 7 years time.

Tanjung Bungah MP Teh got guts to shave off his head to remind Developers not to Play-Play with enviroment.

Bukit Relau condo may appeal now foreigners as most local will shy away from buying that expensive project due to the curses thrown by angry environmental folks.

‘City of Dream’ may be a nightmare in the making if the property bubble is burst?
Already The Wave at Penang Time Square is desperate for buyers.

This is a rich man game of speculation, do not borrow from bank to play such game hoping that the rental yield will pay for your loan instalment.

OWC : Don`t worry, They are being marketed to foreigners that buy with cash.

There have been persistent rumours about the unhealthy nexus between the Big Developers and the state government, especially the CM. I am starting to have my doubts too looking at the policies and actions of the ex-CAT regime. Every policy and action seem to put the Developer First and rakyat last. While the developers are busy covering the entire island with super condos, the CM shows scant interests in building affordable housing. At this rate, none of pre-2008 residents of Penang would be able to afford to live in the island, if not driven out by the cost of housing,… Read more »

pre-2008 residents already complaining of pending increase local street food due to brang naik phenomena in 2014 !
Char Hor Fun if rise to RM8 a plate only S$3.20 or US$2.9 or A$3 so no big deal to Malaysians returning from overseas.

Street food masters (so called ori-maestro) usually raise the menu prices by 10% during Chinese New Year. I am afraid for this year the raised will stay put even after Chap Goh Mei.

First thing is, my Christmas gift comes lately for Anil just to show my appreciation, just a small gift of 100rgt @ ptikus pbb. Secondly, Pg CM’s office has replied my mail re water theme park at bf. I produce, “… the temporary lease is on the sea portion not the beach. Beach front is still public space for all.” Letter sent on 31.12.13 reply received 2.1.14. I used to send letters to gerakan but never a reply. Yang, you put the escalating price of properties on Lim guan eng? Lu si siow liaw si bor? Do u know u… Read more »

Letter sent on 31st, 1st is new year day and recd a reply on 2nd.
Wow wow wow , Did you learn all that from the Hokkien TV drama
Kee, you have to do a little better than that. Keep trying.

Many thanks, Kee, for the kind thought. Received it.

Like a broken record. Content wasn’t even good to begin with. Repetitive garbage pounding my brain. It must be LGEs fault too.

State gomen sold this land away to build affordable homes for the rich. And the main contractors are foreigners(?) What a joke! Can still trust them?

Anil
For your new posting on Penang Street Food (food prices to increase with respect to inflation ?)

Follow Jason Lin as he brings you down the streets of Georgetown, Penang to hunt for their local specialty! This is a must watch for viewers across both states (Singapore and Malaysia); and if you’re a viewer heading to Penang soon!

I few concern for the poor & working class people of Penang where they will find it very hard to afford a house while the middle income will be forced to buy 400 sq ft soho or suites from the developer at 450-500k. That is the scenario for the people. With the control it will be good and a blessing in disguise for many. They will all the more continue not to sell. Like the Boulevard that was initially sold for 320k is now fetching 480k-500k. With the control they can wait 2 more years and it will be worth… Read more »

cannot deny the fact that island Penang is going to be hub for richie rich. additional new migrants (pendatang asing luar pulau pinang to set up home away from home ?) hopefully are those not the kiamsiap ones. these folks should splash their money to improve economy so that the poorer and middleclass penangites can continue to benefit from spill-over effects like job creations. the people of penang should ask their MPs about how the gomen vision can translate into concrete sustainable working plans that help to improve daily lifestyles expenses and also not to hurt the eco-system in ou… Read more »

Smart Grand Daddy, Even if you go straight up to LGE, Jardip and all the exco, do you think they will listen to you. Just go have a try and you will know.

it’s a free world. you can call on Jahara or Oh Tong Keong if you care so much about the plights of those cannot find affordable new homes in Penang island ?

Yang
Do revisit anil’s posting on genie-coefficient in Msia – widening gap between rich and poor Msians.
Count yourself lucky yout home (or houses) have appreciated in value; and that you are considered priviledged Penangite who should step into politics since you seem to have so much housing data. Once you are elected you can become Penang chief of housings and you can set up policies which Sri Delima MP think otherwise.