I asked an environmental specialist about the beach erosion in northern Penang Island, and this is what he had to say: 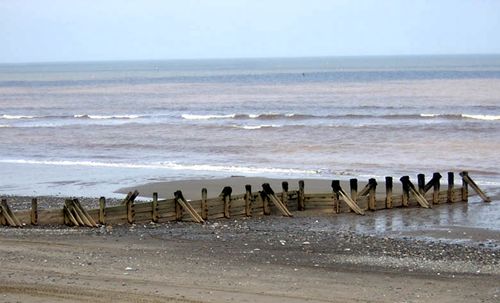 A groyne in the UK; Butterworth used to have similar groynes at the beach fronting the RMAF base – Photo courtesy of Wikipedia

Various modelling studies were done during the construction of the Penang Bridge, land reclamation of Batu Maung and Bayan Baru and the North Butterworth Container Terminal to try and predict the likely impact on sediment transport and the likely erosion and sedimentation.

However, when one side is the open sea, such as along the north coast of Penang Island, the volume of water flowing through is not affected by the fixed volume of the straits.

When any structure is constructed, such as land reclamation or the construction of a “groyne” to prevent beach erosion, it will interfere with the natural beach processes.

When land reclamation (in northeast Penang) took place, it blocked the natural flow of currents, and the sediment is deposited in Gurney Drive. Hence, the increased sedimentation and the building up of mud flats along Gurney Drive. However, there is reduced/no sediment being deposited west of the land reclamation to replenish the shore line and hence, the beaches in the Tanjung Bungah beach hotel are eroding (reported last week in The Star) and this is likely to continue and get worse.

If the hotel builds a groyne to jut into the sea to prevent further beach erosion, it will reduce or stop the flow of the currents and sediment will be deposited and they can maintain their beach. However, this will starve the coastline further west of sediment and erosion will take place perhaps to Batu Feringhii. This is a chain reaction, one thing leading to another.

In Bintulu, Sarawak, in Tanjung Kidurong, where the Bintulu Port is, the port authorities built a structure into the sea for the handling of the LNG gas. This blocked the natural sediment flow along the coast, and there was increased sedimentation at the port and the port had to be dredged regularly to allow the container ships to come in.

However, the sediment deposition in the port starved the coast futher up in Bintulu town of sediment and severe erosion took place in the town. When I was there about 10 years ago, part of the town was eroding away. At that time it had already lost one or two streets. Perhaps more now.

All this information is in the text books on coastal geo-morphology. However, developers don’t seem to understand that what they do to nature has consequences.

Tan, tanjong bungah has hit the nail on its head, whereas Iron keeps his defensive posturing to side developers [I remember earlier postings on the matter]. Erosion and sedimentation are natural occurrences; one or the the other happens. When you make changes to the shoreline with reclamation works, when you thwart currents, there are changes to the natural patterns of either erosion or sedimentation. This is just common sense, though it seems to continue to elude Iron. Developers are in it for the money. Their prime motivation are the mega-millions. It is up to the authorities to insist on doing… Read more »

I am not siding the developers.

I am siding with THE TRUTH !

Unlike some here who jump on any chance to place blames on easy targets like the developers or the land reclamation I will never do that, unless of course, you guys can prove it to me with SCIENTIFIC FACTS that indeed, those activities are causing beach erosion, either directly or indirectly !

But then, maybe even this will be too much for you guys to chew.

For you guys think that as environmentalists you must blame something for EVERYTHING that is happening around us.

Hi everyone, Developers are only interested in the bottom-line, not many have CSR. But the main ‘faults’ lie with the authorities (the so-called custodians of the people’s welfare) who should be well-aware of environmental medium and long term costs and effects. When erosion takes place due to these projects, it is the public who has to suffer and bear the remedial costs! The political eunuch former CM of Penang can throw more light on how such projects, that directly benefits the developers (and their collaborators in govt?), were approved – were the approvals granted despite some objections if any? Maybe,… Read more »

It’s misleading to report beach erosion hinting that a certain activity (land reclamation) being the main cause.

I think you should put that request to the relevant authorities.

Some food for thought: a Nahrim technical paper on coastal stabilisation mentioned the following:

Erosion was identified as a national problem in the National Coastal Erosion Study
(1984-1986) with more than 28% of Malaysia coastline is facing erosion. Ill-planned
construction, reclamation works and aquaculture projects were highlighted as the major
cause of damage to Malaysia coast.

And I don’t see any aquaculture in that part of Penang.

This is what people say commerce without moral is dangerous.