The news that a 138-metre tall tower dubbed ‘Maha Tower’ is being constructed in Langkawi has gone largely unnoticed. Why build such a huge structure to mar a natural paradise (or at least, what used to be a natural paradise)? 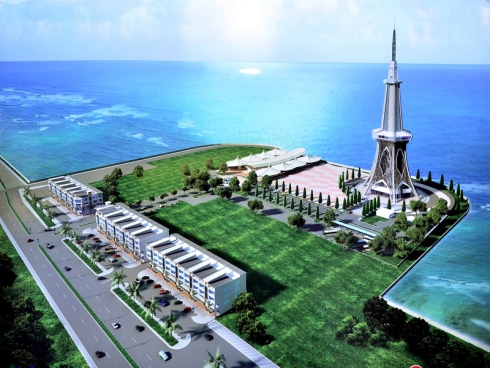 The project is being undertaken by PFCE Integrated Plant and Project (PIPP), working closely with the Langkawi Development Authority (Lada), to build the tower. Dekinjaya Builders Sdn Bhd is handling the construction.

The Ant Daily reports that PFCE is a wholly owned subsidiary of PFCE Bhd. A check on the PFCE Group website, however, does not reveal an outfit by the name of PIPP. Neither is PIPP included in the list of subsidiaries of PFCE Bhd in the latter’s 2012 Annual Report.

Malaysian Insider had cited a Bernama report in 2011 saying that the company undertaking the project is Blackrock.

Lada was set up in 1990 by the federal government to spur development on the island at a time when the island was being given extra attention by then premier Mahathir.

Someone reportedly came up with the ‘bright’ idea 20 years ago to build this tower on the island.

The Perdana Leadership Foundation website carries a Harakah report from 2011, which quotes Mahathir as saying that the project has gone ahead after “securing an injection of funds from the federal government and receiving the support of the state government”.

The report also mentions the construction is to be undertaken by Blackrock Construction Sdn Bhd. The Blackrock executive chairman is Abu Hassan Mohamed, who reportedly is the special adviser to PIPP.

So federal funds were injected for this tower? So is this a government project or private project?

Mahathir added: “I have been given the honour of naming the tower but have not come up with anything suitable.”

That was back then.

The Ant report noted in November 2013: “Abu Hassan also dismissed speculation that former prime minister Tun Dr Mahathir Mohamad is the inspiration for the name of the tower. Incidentally, Dr Mahathir officiated at the launch of the project earlier this month (November 2013).”

Perched high on the tower will be a telecommunications control room at 111 metres and an observation deck at 102 metres above sea level. The deck will provide a view of the mystical Lake of the Pregnant Maiden (Tasik Dayang Bunting) at the nearby Dayang Bunting Island.

Oh dear, there goes Langkawi. Does Langkawi really need a telecommuncations control room? And surely there is already a good view from the existing cable cars on the island?

The project itself is reportedly aimed at drawing in more tourists. But who in their right mind would want to go to Langkawi to gawk at a tower?

In a sense, this project provides food for thought: a tower called Maha will mar the natural beauty of Langkawi.

I spent 10 years on Langkawi and continually saw the misappropriation of funds and frivlvlous spending of funds. You need only to look at the immigration palace to see what is wrong. Many foreigners are hesitant to complain less their visas are blocked. Malaysia my second home does not apply in Langkawi. Pantai Cenang is become a pollutd area and public access to the best beaches are being blocked by big hotels (tangung rui). the island will graduallyl self destruct thanks to the avarice of the big players. Hope they can live with the fact that people will find them… Read more »

Langkawi could be the jewel of west malaysia but like most places in Malaysia it fall prey to the avarice of wealthy people who see an apportunity to enhacence their bank accounts and prestige. ‘eventually they will be recgnized as the people who destroyed a paradise. Polluten waters, restricted entry to beaches and overpriced amenities. unfortunaly the locals dont have a clue about what is happening.

Sad to see more money is ploughed onto Langkawi while other parts of Kedah are deprived money for development. Time stood still in Alor Star for last 20 years without any new development to raise teh living standard of teh people there.

Some say it is Mahal Tower 🙂

Pulau Langkawi is more suitable for the development of a retirement village. Investors and well-to-do retirees, in all probability, will flock to the island.

non-muslim retirees most like to enjoy beer at discounted prices at Langkawi.

some enjoy not to been for fear being caught. hav mini bar set up at retired home !

What can you do with RM100M with the biggest benefit for the people?
I believe anyone here can think of better use for of money.
I mean how about a university campus?
Wind turbine farm generating electricity amongst the paddy fields providing income for the farmers?
A zone and incubator for techno start ups?

“So is this a government project or private project?” We have a sub-dept under PM’s Dept called Public-Private Promotion. Does anyone understand what this means? When asked how some overseas trips and celebrations are financed, we are boldly told that there were “contibutors.” This is the state of the country.

Projects are built with the intention for subsequent repairs and maintenance that require separate contracts for Umno Baruputeras to milk more for easy money.

Yeah, many singaporean friends of mine said that Malaysia loves to build mega projects. The problems come over the ages…..It just fell into disrepair…….In Singapore, not much fanciful buildings but those that lasts through constant maintenance. One just got to consider public housing & you will see the difference

The pearl of the Orient, the jewel of Kedah, the beautiful sounds of Sarawak It is all about beauty and nature, symbols are given I found pearls in the Orient, got diamonds as well and hear the beautiful sounds everywhere I see the destroying of nature and more both in Penang and Langkawi I am very grateful Anil made an article about the Maha tower, those kind of action buildings are important for all who concern In the beginning the plan was a tower surrounded by a park….that sounds nice for some It was a nice trick a lie to… Read more »

Another towering achievement by our political leaders.

Perhaps the old man knew that his time is almost up, so a tower in his honor before the last breathe is to cap his achievement?

So much money is spent on Langkawi but the local residents do not realy benefited.
Untung for those Umno Baru cronies in those projects is a very well known fact among the locals.

You are so wrong guys. I believe this is the same formula that had been used for Putrajaya. Now being used as the model to develop Langkawi. Putrajaya once was a solemn rural area. Even i who stayed in Serdang 15 years ago never heard of Kampung Limau Manis. Neither Kampung Abu Bakar Baginda (which is just nearby Serdang!), until i went to Putrajaya. But now so different. Recently I accompanied my foreigner friend to visit Putrajaya (of course he is not BN supporter). It was his first visit and he was very impressed, even though he is a nature’s… Read more »

Maha tower??? Be bold why not call it Mahathir’s Tower straight away?

Azizan was once very pro BN…

Andrew I
Reply to  kee

Cannot lah. Malu sikit ler. But even among the trolls, we can sense some dissent.

Will it be maha v. kang?

Priyanka
Reply to  Andrew I

if the project later lacks fund to complete, then builders of “distincntion” targeting near “extinct” project would come in to revive with conditions attached.
So who knows Maha Tower may later be called SP Setia’s Maha Tower (whetehr apanama likes it or not?) ????

No wonder his son got to be MB Kedah

What do you expect? The son of MM is the M.B.

It is nothing but GREED and PROFITS… What is even worse if it is financed by the Government!!

But it should also be borne in mind that this project was also “supported” by the Azizan-led Pas state administration in Kedah in 2011. (See the link to the Harakah report above in my article.) Pakatan state governments should remember that not every federal development project is good development. Each major project should be carefully evaluated to see if it will benefit the people/the environment or otherwise.

Reminds me of the Skyscraper Index 🙂

Such mega towers are often built before an economic bust, right?

Reminds me of Petronas Twin Towers and the recession of 1997-98.

Anil, you may be right? Anil … is prophesise now !

Langkawi is more than double the size of Penang with a small population and is still underdeveloped. Penang is small and most of the Island have been developed leaving only a scatter of greenery left. Now its left to the crazy for development CM to raze Penang until no more greenery is left. So why such a big fuss over Langkawi. Fuss more on your beloved island that will soon be destroyed in the name of development by the mad CM

Exco Kedah defended Mukritz when PAS Kedah asked what’s the development plan/budget to “bangun” Kedah by stating many projects with spill-over effecrts for Kedahans at Langkawi costing RM12 billion. May be that Maha Tower part of project able to detect crimes (eg khalwat couples) from top ?
Not sure final decor will be Hijau-Kuning (sawah padi) in colour ?

Actually its brilliant of these guys to push it now because they know Mahathir now gets whatever he wants..

The people behind this project has learnt from the egregious Mahathir how to make mega (money) by building mega projects there is no other motives behind the whole thing, period. Why do you think a resort island is a place for a 138-meter tall is being constructed there ? Surely it is not to impress the tourists that go there, almost daily these tourists live amongst some of the more taller structures in the world. They DO NOT go to see the 138-meter tall tower in Langkawi and it is not the tower that attracted them to go there for… Read more »

Maha Tower? Doesn’t sound very nice & too egoistic. And looks out of place.
C’mmon, Langkawi is no Gay Paris!

For Langkawi with much of pristine rainforest to be enjoyed, we should not bastardise Nature
bestowed on Malaysia.
Listen to the winner of the world’s most beautiful sound & it belongs to a ‘frog’ in Malaysia.
http://www.themalaysianinsider.com/malaysia/article/and-the-worlds-most-beautiful-sound-belongs-to-a-frog-in-malaysia

Now you know one of the reasons why I love Belum Rainforest. It’s our future Avalon (after Armageddon).

DAP & LGE is also learning the same thing fast. Worry more about Penang than Langkawi and how DAP & LGE (administration) make mega money tearing and destroying the beautiful Pearl of the Orient by selling our precious lands (to … cronies?) and … investors and chasing Penangite out for his beloved rich and powerful…