Heritage enthusiast tunglang sent in this photo story of the remains of a 19th-century mansion at Pykett Avenue that was suddenly demolished before MPPP personnel could visit the premises to assess the building. The MBPP later stunned many Penangites when it rescinded its rebuild order.

It was a September Sunday morning. Passing by the desolated grounds of the mansion, I decided to pay her (the remains of the mansion) a second visit. 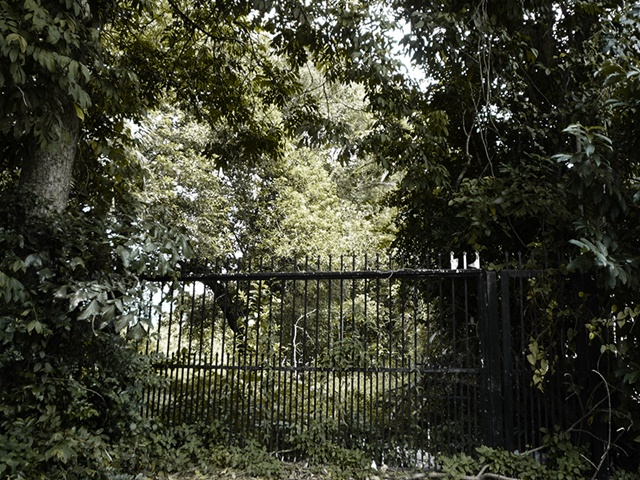 Standing outside and expecting to see nothingness, out of the blue I could sense her ravaged soul still wandering in limbo among the mossy ruins and wildly grown trees in a once resplendent mansion estate with an English garden. Was she waiting for justice or a promised resurrection?

She was keeping her distance, put on lockdown behind a grill gate that in the past protected the fragile and beautiful mansion from harm. Her beautiful eyes belied her distressed soul trapped in frozen silence. Her parted lips wanting to say something yet could not.

Ground Zero now looked more like a dead-silent Aokigahara Forest, overgrown with wild shrubs, darkened by restless trees stretching out twisted branches of traumatic pain. It was littered with the dried leaves of fallen grace and trashy icons of a cosmopolitan ‘toxic’ environment.

Discarded on the damp forest floor was a white ceramic washbowl probably used by the mansion while she whispered her secret love poems in the mirror every morning.

I could just about hear the echoes of a once charming English garden with soft Bermuda grass, the tinkling of angelic laughter amidst barefoot-waltzing to the classical tunes of Johann Strauss’ Blue Danube, the notes wafting up from a stately gramophone during a Sunday tea. 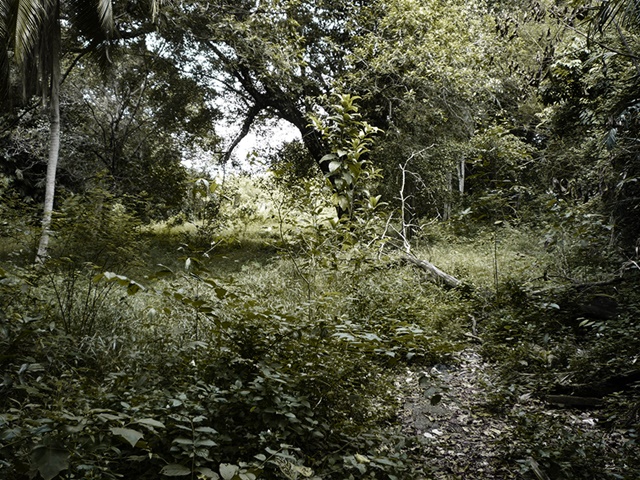 As I walked around the perimeter fencing hoping to engage her restless soul, the natural surroundings looked despondent, putting up a cordon of extreme caution, which included a menacing-looking giant ghostly shrub.

But the mansion kept her presence within my sight. Sensing my dogged persistency to connect, she seemed to express her utter helplessness and anguish. Was that almost audible sound the slow drawn cry against an indecent act of despicable ravage in the dead of night?

It was a sunny morning, this brief encounter with the restless soul of the mansion in her seemingly timeless estate abandoned in silent desolation and decay. I left with unforgettable impressions of beautiful memories now lost, along with an emotional capture of her present state of restlessness and helplessness, devoid of hope.

The mansion suffered an untimely end, her dignity demolished and her regal heritage pulverised into grey dust. But her timeless beauty and living spirit of old world colonial charm live on in the human hearts and minds of Pulo Pinang.

Will there be an earthly resurrection ordained by law for her, may I ask the Lord of Justice?

“Pykett Avenue mansion” Anil, Just to share this… “…The Khaw family left a legacy of beautiful mansions and landmarks in Penang. They owned two grand mansions which used to stand along Jalan Sultan Ahmad Shah, i.e. Asdang House (site of current Mayfair condominium) and the sea-fronting Chakrabong House. Both were named after sons of King Chulalongkorn and became favourite venues for Siamese dignitaries and socialite activities. In the eyes of the Thais, Penang at the turn of the 20th century was an advanced state administered well by the British authorities. To enhance the reputation of Siam, the Khaws donated a… Read more »

Wasn’t the MPPP about to make a site visit to assess the building?

This house has no connection with Khaws Sim Bee personally. It was merely purchased by one of his sons years after Khaw Sim Bee had been assassinated in Siam. Go and ask Clement Liang of the Penang Heritage Trust. He can tell you the correct histories behind all the former Thai-owned properties in Penang. Don’t trust newspaper reports. Reporters nowadays rarely verify their facts through proper research. They just look at blog sites and Wikipedia and think that is the truth!

Dewan Sri Penang stands on the site of Rajah Lodge, a mansion once owned by the Khaw/ Na Ranong family. This site later became remembered as Ranong Ground after Rajah Lodge was demolished. The name Rajah Lodge has, unfortunately, faded from public memory.

The owner has the right to do what he wishes for the property. Even Lee Kuan Yew put on his will that his residence be demolished upon his death.

GK Ong – you are merely (mis)quoting part of what LKY said in his will. He merely wished the demolition of his marital home at. 38, Oxley Road simply because (1) his children were not attached to it, (2) its continued existence barred the development of the surrounding area, and (3) he did not want it turned into a museum as memorial museums tended to become rundown very quickly. LKY said that his wish for the demolition would be SUBJECT ALWAYS to Singapore’s heritage, building, planning and zoning laws & regulation. Should the law prevent the demolition, then he wanted… Read more »

My point is we should respect the wishes of the owners of a property. Bottom line is LKY wanted the Oxley Home demolished once his daughter has decided to move out.

Colonial historian should realise that sentiment towards colonial past has no place in the ketuanan melayu concept. Thus P Ramlee’s old home in Penang has higher value for preservation since the Gerakan era.

I only see the beautiful greenery of realtime as depicted in the photos. The past is in the past. We ought to live at present moment and envision the future. It is also the way the lost souls get resurrection and for the justice to be served majestically.

tunglang
Reply to  Lord of Justice

By earthly resurrection means restoration of the mansion to its original architecture. Not the end-time Christian version of spiritual resurrection of long-dead Christians & 2nd resurrection of the living faithful to the glory clouds. It was earlier put as an order to the developer to rebuild the mansion, an order U-turned into something else as convenient as a U-turn of new reasons after the fact of reasons. We share with Madame Pykett the disappointment of such turn of event as illustrated in the storyline. But with a glimmer of hope that a miracle may happen as in the bodily (physical)… Read more »

Tunglang, nowadays most Malaysians are unable to appreciate poetry in English. Sad!

unfortunately the bulldozer has the final say. that is the sad reality?

There is no proof that the Pyketts ever lived here. Pykett Avenue was, of course, named for Pykett School which was close by.

Go to tunglang’s Facebook to read my personal storyteller interpretation of this ill-fated mansion in desolation to get the correct flow of my story. Anil’s editing may have cause unexpected irritation / agitation in some plastic souls. The purpose of calling this mansion Madame Pykett is to emphasise that it was ‘ravaged, raped’ a metaphor for illegal demolition of a beautiful but fragile mansion of heritage value in the dead of night. And was left abandoned in desolation & decay for years. If I had called it Khaw Sim Bee Mansion, it will not fit the rape metaphor to achieve… Read more »

Nevertheless, this was Presgrave House and surely worthy of preservation based on its history alone. Nevertheless, the history was forgotten until it was too late and it was deemed inconsequential even by its last owner and the state authorities.

This is NOT “Pykett Mansion” or “Khaw Sim Bee Mansion”. Khaw Sim Bee’s home was Chakrabongse on North Beach Road, later renamed Northam Road and again as Jalan Sultan Ahmad Shah. That mansion has been long demolished and appartments built on it. The site in the photographs is “Presgrave House” built by Edward William Presgrave, co-founder of the law firm, Messrs. Presgrave & Matthews. When E. W. Presgrave returned to Scotland at the end of 1908, the house was leased out and it is possible that the Pyketts took over the lease, probably to raise their adopted son there. In… Read more »

Thanks, I have corrected the piece, in the interest of accuracy.

21st century man being possessed by 19th century figures ? Better engage Ghost Adventurers to seek the understandings of the grieving of underworld ?

Kim, tunglang or Anil are just reciting a poem. Nothing ghostly! This is what happens when the standard of teaching of English in Malaysia has been lowered so much. People don’t learn poetry in English anymore and cannot recognise it for what it is.

We Malaysians watch horror stuffs on Tv seeking paranormal experience. Colonial ghosts still wander aimlessly tunglang being a seeker himself could account for that.
sorry we are no more under British rule for over 50 years. We recite pantun Pak Samad’s way which Shakespeare fans like you not able to understand.
btw, Hamlet also a ghost lah.

kim & Colonial Historian.
Want to read some real paranormal stuff about Madame Pykett?
Wait till tonight.
In the mean time just stare at picture #2 & open your ears (captioned: Where a restless soul is trapped in dark and frozen silence)

On that September Sunday morning, I walked around the perimeter fencing to capture scenes of what looked like Aokigahara Forest (see pic #2). The air was dead-silent, not even a serenade of cricket musical typical of forested places. Neither chirping of birds to sing Hallelujah on a Sunday morning. I was anticipating a manifestation of Madame Pykett. In the dark ambience of desolation & ruins, I could barely hear an unearthly baby’s slow drawn cry – a sound oscillating between a crying baby & a forlorn cat. And it got more & more clearer but without anything embodied to show… Read more »

Since 1970s, that place was already a run down house with a messy garden. I don’t know what nonsense this writer is writing about. The garden was overgrown and the house is very old, with our grandfather’s old cars running in and out….

It is a pity that the place was suddenly demolished before an MPPP site visit which could have independently verified for us if the mansion was worth preserving or it it was just a run-down house, as you say.

Khaw clans have memories of their roots BUT the building needed to be “down” for land to be redeveloped such that money can be distributed for future generations.

The writer should be street food ambassador and should refrain from … family feud.

If all run down houses are not worth preserving (regardless), much less with soul-possessing ghosts that strike dark fear in some skittish souls, Suffolk House should have been pulverised into grey dust decades ago! Captain Francis Light, pls go back to England to continue your nightly waltzing!

Why not put forth a state legislation that legalise demolition of all ghost-infested bungalows in Penang Hill including the famous Relau Mansion of hundred ghosts?

Kimmy Garish, what a name for a skittish soul!!!

It’s just poetry. Nothing to sneer at.

Get real please, no need poetry for soul talk and being disrespect to the Khaw family. Go Nolstagic with A Night in Penang Museum instead.

You meant Penang [email protected] Road? Ghost adventure (once in a blue moon) organised by the museum playing hide & seek with Japanese mi-si (nurses) & Kempeitai sergeants is a waste of resources after spending millions to refurbish the formerly St. John HQ. Should have been fruitfully used as Penang Street Food Museum to earn tourist dollars. Why waste such a beautiful building to breed more ghosts??? Fact: When I recceded the place in 2011 for street food museum, I was told by a security guard to be careful of this place as it was “keras”. The staff of the museum… Read more »

When Ghost Adventure goes abroad to MALAYSIA, tunglang can sign up to be the consultant for the episode on Pykett Mansion ?