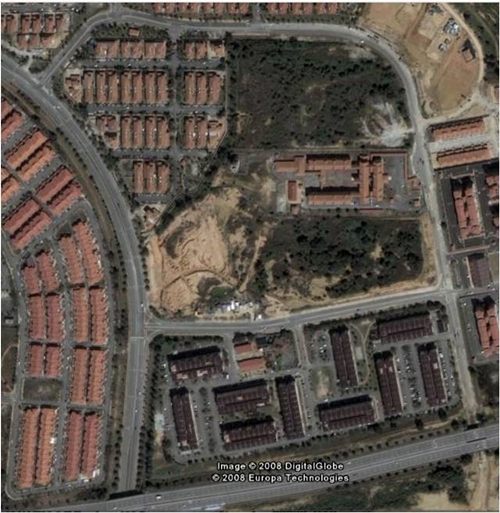 A satellite image of the Carrefour project site, which lies at the lower-half of the green patch in the middle. The school juts into the green, immediately above the project site. Residents fear that the narrow road on the perimeter of the patch could be converted into a one-way street when congestion increases.

About a hundred Kota Damansara folks staged a protest next to the construction site for Carrefour hypermarket yesterday. They have been campaigning against the project in their area since November 2007.

This is the latest protest against the project. In April 2008, about 400 residents staged a similar protest.

They fear that the hypermarket, located just next to the primary school, would lead to congestion in the neighbourhood, sound pollution, and more traffic being diverted to the entrance to the school, thus endangering the safety of pupils and disrupting their learning environment.

A spokesperson said they now felt compelled to take the matter to Court. The residents’ associations of Gugusan Dedap and D’Villa Avenue, the parents-teachers association of the school and a resident (who was not served with the Borang A Notice by MBPJ) filed a legal suit in the Shah Alam High Court against MBPJ and the Selangor State Government on 20 March, 2009. They are seeking a declaration that the approval granted by the town council and the project is illegal and contains procedural impropriety and is therefore invalid. They are also hoping to obtain a ruling that the lifting of a stop work order was illegal and void and an injunction to restrain the council from allowing the project.

The residents are claiming that the council had overlook a house at 2 Jalan Kenyalang 11/6G, which lies within the 66 feet ruling when serving notices to neighbouring properties. They also claim that the council had failed to abide by the prescribed period of 21 days as stated in the Borang A Notice when it approved the planning permission on 24 September 2007 (before the expiry of the 21-day period).

Community representatives are also planning to lobby Carrefour in France to find out if the project is in line with the business group’s corporate social responsibility practices.

The people who are protesting and even some people here are acting like small babies! So what if Carrefour is next to a school? So what if it attracts traffic? If you don’t want all this and prefer to be in isolation, better relocate to a jungle. This cannot, that cannot, everything also cannot!

They should widen the road at least to improve…

is that another carefour project right???
i want to apply food court in there…..
serious!! i was really really interested…..
any one tell me how to apply it??? =>
hit me back ok…

Who has been sleeping all the time? The original place was a Forest Reserve and part of world class RRI Experimental Station making malaysia world class in Rubber Research. After raping the forest and deflower the place, You mentioned about restoring? Where to restore? All the binatangs and burong kakak have to emigrate!

Wah! Really a lot of comments You are all right! This is a Barisan National mess. But we had a stop work order enforced. Explained to the Majlis Tindakan Ekonomi Selangor chaired by the Menteri Besar. In the beginning he opposed this project as he mentioned this to our ADUN. But after a few rounds of closed door meetings with the Contractor and Carrefour, he changed his mind. Commissioned a FLAWED and MANIPULATED survey and proceed with the project. So. Is only BN corroupted? We better think again! This should also be an MACC case. Yes it is BN mess,… Read more »

Kingkong– u obviously hv been sleeping; we hv been working w FOKD to get the forest re-gazetted which according to FOKD Founders shud b soon. FYI also, FOKD has gotten more clout because of our cause. Anil Kumar– u r right; a hypermkt nxt to school will create lots jobs!! For those students who never make it because the hypermkt deprive them of proper learning environment. The school is on higher ground than the hypermkt & the loading bays will be facing the school.u do not hv to be a rocket scientist to know that sounds travel louder upwards. May… Read more »

The planning permission was approved on 24 September 2007 (before the expiry of the 21-day period) – ini kerja Khir Toyo, UMNO and BN. Will people in Kota Damansara vote for BN again?

How can a Hypermarket be located next to a school. This is unprecedented. I am sure such a thing DO NOT happen in France. Is it that the future of Malaysian children are NOT worth anything? Where is Carefour’s Corporate Social Responsibility which they have been preaching about?

What is Pakatan Rakyat doing about this since it is the Government in Selangor? What happen to all thier pledges and promises that they will right the wrong? It is only election gimmick to get our votes?

Something very fishy is happening. What is MACC doing about this?…

Guess those who dissed the Buah Pala residents in the other thread will come out in support of the KD residents spouting about congestion, quality of life issues blah2 when we all know the real reason lies within perfidious hearts and the state govt in this case will be “compelled” to acquisciece.What hypocrisy… hahahahahahaha……..LOL

now let see, if the similiar KBP drama will begin!.

Those guys should not be living in this Kota in the first olace. Where are the protests when UMNO government rape the Forest Reserve and turn into housing? When did the people protest and demostrate when UMNO Government clear the forest reserve and build houses? Now the people have their greedy needs met and wanted to stop more buildings? Hyprocrites!!

once built.the residents can boycott the place.If nobody go there,then no congestion lor.Soon it will close down. :-))
This can only happen if majority of the residents opposed to the project lor.I will keep an eye on the progress.hehe.

Again another mess created by BN .
And PR has to face the brunt of the Rakyat!!!