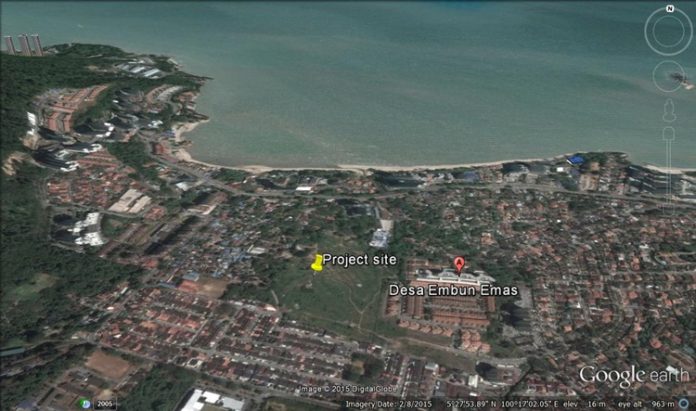 They are protesting against a high density project that would see the construction of  two 50-storey towers, one 49-storey tower, a low-medium-cost 34-storey tower and 21 houses, totalling 914 homes (not including a parcel of land for future development) in front of the Desa Embun condos. This exceeds the maximum density allowed under the Penang Structure Plan, a lawyer advising the residents said.

The project site, to be developed by Taman Sri Bunga Sdn Bhd (part of the Boon Siew Group), covers an area between Jalan Sungai Kelian and Jalan Loh Poh Heng in Tanjung Bungah.

The residents told the Penang Chief Minister in a letter dated 13 April 2015:

“There are 1,056 signatures in the hard copies of the petition (please see the original forms attached) while 769 persons signed on line (as of 9 pm 12 April 2015) making a total of 1825 signatures. The online petition by Desa Embun Emaswas launched on 4 April 2015 and within a week, hundreds have signed up with various comments supporting our concerns and issues.”

Penang Island City Council mayor Patahiyah Ismail has reportedly said the developer would revise the building plans in response to the concerns of the residents in Tanjung Bungah. The number of storeys would be reduced, and fresh building plans resubmitted.

But one residents spokesperson told me she did not believe that the density of the project would be significantly reduced.

The residents estimate an additional 2000 cars moving around the vicinity following the project.

To alleviate congestion on the approach roads in this quiet neighbourhood, a council engineer reportedly said that these roads would be turned into four lanes.

I am not sure turning roads in a quiet neighbourhood into four-lane roads is such a fantastic idea!

So what has happened to the Local Plan? And the maximum density under the Penang Structure Plan?

Why reserve Tanjung Bungah and Batu Feringgi area only for the rich?

I hope the high rise affordable homes could be built here.

I think the point is the density exceeds the maximum stipulated under the Structure Plan.

And are the ‘affordable homes’ really affordable to the low income group?

Soon all the water front will be exclusive to the rich.

We shall preserve Kg Buah Pala in its original state.. What happened now !!!.

Watch this Youtube clip of a dialogue between the CM and Sg Ara residents on the Sunway City hillslope project.

0.41: “(The Penang state govt) will not allow any major development on those above the 250 ft line”.

7.41: “Unless there is a change of government, we (the Penang state govt) will not allow this (Sunway City hillslope) project to proceed”.

Congratulations and great job by the Tg Bungah residents on the petition but it is not over until the current plans are withdrawn and new plans sighted.

Who will now believe when a CAT speaks with rhetorics???
No even when it can lick its paw & point it to the heavens (swearing in all earnest).
Why not change this cement-government?

tunglang, have you heard of “Illuminati” ? Some say this infamous organization like to infiltrate the popular beings and some say the CAT is now under Illuminati’s influence ! This may sound like Ribley’s Believe It Or Not but you can google to get more info……

henson, the Illuminati is symbolic of the wealthy controlling the poor. Some suspect Bill gates is one of them. So is Georgie Sorrowful. Whoever they are, one thing is certain – the manipulation of global trade & competitive economies as a weapon of cross border influence + control of nations is happening. The other is biological weapon like Bird Flu & AIDs. We the small ‘udang’ are helpless at their mercies & fancies. But it should not be their end-games if we stood our ground. Already a global network of people like Anonymous Hackers are … sabotaging the evil ones.… Read more »