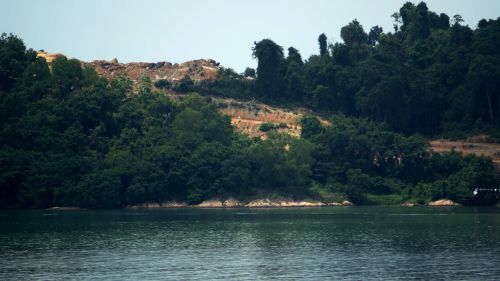 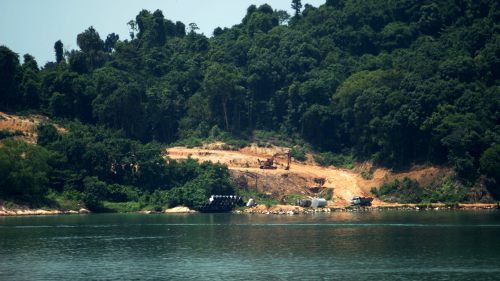 An excavator, a dumptruck, two fuel tanks and a stack of waterpipes

Wonder what they are doing here at Pulau Jerejak. Much of the island is supposed to be a state park, which could be a haven for Penangites wanting to escape from the hustle and bustle of city-life.

Wouldn’t it have been great to have a relatively untouched natural sanctuary so close to Penang Island?

But the PBA is constructing a 45 million-litre reservoir in Pulau Jerejak for the Bayan Lepas industrial area. Is that the construction work in the picture?

What a pity that we have to cut and chop yet another hill and trample on another green lung, especially in this era of global warming.

Why aren’t we looking into rainwater harvesting?

Water catchment area should be ok. At least Penang dont have to be too over-dependant on Kuala Muda river which is so polluted.

In any case, any theme park on Jerejak would end up being a white elephant… like the present resort on it. The current development is for a water catchment area… like what Quah pointed out.

Yes…all natures park should be preserve as best as possible in this world of modernisation where there are now too many concrete jungles. I used to enjoy the Penang beaches when I was a kid…but not now. I didnt even take my children to the beaches due to the extreme degree of pollution. Our seas and beaches are now so dirty.

YB Sim is the Adun for this area. Check with him as this falls under his watch. One of his predecessor’s vision was to develop the island into a theme park.

Nothing new. I’ve been griping about it since last year:

Oh, so that’s what it is! I thought they were building another resort. Well, I don’t know if this is good or bad. As it is, Penangites are getting water from the mainland. Have you seen the river? It runs along palm oil estates. You can imagine the amount of fertilisers and pesticides (which contain heavy metals) that run off into the river every time it rains. Heavy metals are the main cause of autism and learning disabilities in children.

Any contract or contruction in Malaysia, there is money to be made.