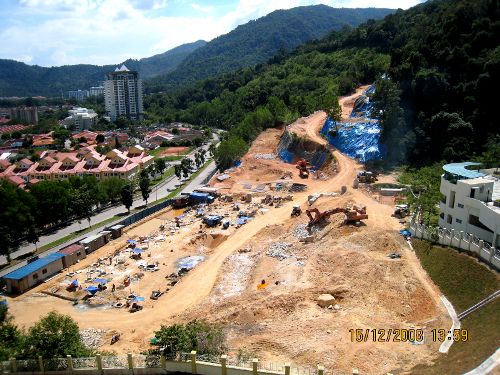 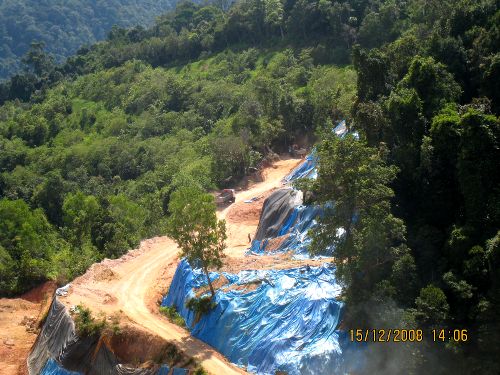 Photos sent in by a concerned Tanjung Bunga resident

From these two pictures of the Bolton Surin project in Tanjong Bunga, Penang, you can get an idea why the Chee Seng residents (living on the left in the top photo) are worried and want the project stopped.

Meanwhile, another reader has sent me an example of the type of dangerous rock-blasting that goes on in certain projects.  The video clip here is of another project not too far away from the Surin project. The reader told me the authorities eventually stopped the rock-blasting work because of the dangers posed by the flying rocks.

Dear People, I have going through the Yes Minister and Yes Prime Minister collections. I love it very much. I believe all politicians such as LGE should watch it. Especially a new government who has come in power and fighting its will against the establishment including some prominient civil servants entrenched in 50 years of BN misrule. I love the part on “The Greasy Pole”. it’s quite similar to the Chins Swee thingy. Well, Jim Hacker kenna influenced to approve British Chemical Corp’s plan of setting up a Metadioxin factory. Bad politically because in 1976 explosion of Sevaso. The only… Read more »

Dear Angry Citizen,
With so many people and organisation including the federal government are having LGE for breakfast, dinner and lunch, I don’t think he can’t afford to sleep on it.

I would like to believe its not a stop works order as the developer continues to work on the site even today. The newspaper stated as below:

Act of God – even the God is angry at the BN plundering of the people and the environment. Is the Penang CM in AAB sleeping mode? Wake up, time for action!

Well Anil,
Read the Star, LGE government decided to issue 2 stopwork orders in Tanjung Bungah. Then set up a tripartite discussion with residents, developers and the state government. That’s the way to go man. A win win for all parties concerned.
That’s what a sane government should do. Lets see what these developers would do next. Then, we decide

Well Hans, no insurance protection from calamity.Force Majure or Act of god

Mind you, another bukit antarabangsa will happen in Penang, stop this bn bolton surin and not wait till lives and properties are lost. Abolish all these bn never ending plundering (nep) of Penang, those bn people are the real plunderers … of Penang and its people!

Present state government should assume the responsibility to ensure the projects are safe to the communities nearby regardless whether those projects were approved by previous state government or not.
If you seriously want to fight hillside development, read my blog on how to fight hillside development
http://eusoon.blogspot.com/2008/12/penang-state-government-can-not-affort.html .

Just checked my insurance policy for my house in Batu Ferringhi. It says it covers all perils including fire, theft etc but NOT loss from LANDSLIP. oH oH….

Anil,
I am fully support your move in highlight this outrageous hillslope activities. Pls keep it coming. This nonsense need to be stopped.

The only way to punish these developers is to boycott purchase of all such properties.

Adding on to it, the Penang state govenrment can raise and impose new taxes:

With films such as this, I believe the state government would squeeze every single pennies from this people

Money makes money. Those with enough money usually get greedy for even more – and because they already have money, they can easily get more from banks – and that’s why they ultimately become a pestilential lifeform instead of recycling their wealth in ways beneficial to themselves, their posterity & the community at large. These people are usually very arrogant too because they’re rich & “successful” – that’s why this country DESPERATELY needs a new government with incorruptible leaders who understand the urgency of the situation and will not hesitate to COMPEL such errant developers to desist from further environmental… Read more »

Well, if the people truly consulted with their lawyers and its beyond reasonable doubts that such actitivities would lead to disasters. Perhaps, they can form up a commitee and pursue a legal action against the developer Just wondering if there is an official report on this matter? What’s the conclusion of the offical report by the professional board as well as relevant governmental bodies? And if those offcial reports pianted a positive report on the actions carried by the developers. Perhaps, we pursue the policy of scrutinising these “watchdogs”. Well, I believe LGE and its government would be well aware… Read more »

This is a shocking indictment of the extent developers will go to. I sincerely hope the culprits are brought to book. They aought to be named and shamed!

Do we actually enforce rules on hillside development. all development seemed to employ different techniques.

This looks bad. But not as bad as the slope development by Ivory Towers in Moonlight Bay. The retention walls there are paper thin and they look like padi terraces in Indonesia. I cringe with fear everytime I drive around that corner. Please do something to stop all these environmental terrorists from destroying our pristine environment and threatening the safety of all Penangites.